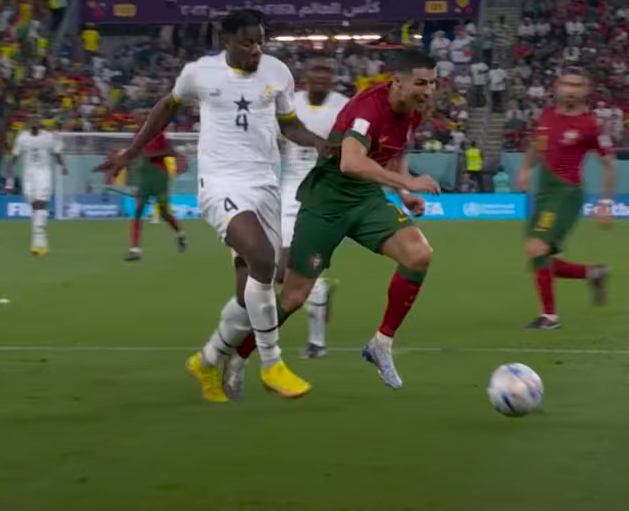 Ex-Premier League referee Mike Dean believes a technical glitch was responsible for VAR failing to intervene and deprive Cristiano Ronaldo of a penalty against Ghana.

The now former Manchester United forward was provided with the opportunity to break the deadlock during Thursday’s World Cup Group H clash after he went down under a challenge from Mohammed Salisu.

Replays suggested the 37-year-old was already heading towards the turf before he, himself, initiated contact with the defender but referee Ismail Elfath pointed immediately to the spot and was not instructed to view the pitchside monitor, much to the astonishment of Dean.

‘It’s scary, it is scary,’ Dean, now a dedicated VAR following his decision to retire from refereeing at the end of last season, told beIN Sport.

‘I’m just astounded and I like to back referees all the time and you can’t support stuff like that. You can’t defend the indefensible. He should have gone to the screen, he should have looked at that.

‘The only thing I can think that may well have happened for some reason, and it does happen sometimes in the UK, there’s angles in the VAR hub that they don’t get straight away.

‘The VAR doesn’t choose the angles the operator next to him does. If he can’t get that angle there might be some kind of technical glitch. I just cant’ understand why he wasn’t sent to the screen. It’s 100% wrong.’

Frustrated Ghana coach Otto Addo has slammed the decision that turned what had been an even contest in Portugal’s favour.

‘The referee gave a penalty which was not a penalty – everyone saw that. Why? Because it’s Ronaldo or something?’ Addo said to beIN Sport.

When asked in his post-match press conference if he believes the foul was given because it was Ronaldo, Addo replied: ‘I think you have to ask the referee. I have no proof of that. We were playing the ball and then there was contact.

‘If you look at the replay, we played the ball, it was actually a foul against us.

‘If somebody scores a goal, congratulations. But this was really a gift.

‘Up to the penalty, everything was possible. Then the game got a little bit wild.’

How can England reach the World …read more

How to avoid holiday burnout this Christmas

Putting yourself first isn’t a bad thing (Picture: Getty) Christmas is supposed to be a magical time, full of family, fun and food. But for many of us, it can be an incredibly stressful experience, where we were feel like we should always be doing more. In this week’s episode of Metro.co.uk’s podcast Smut Drop, […]

They’re finally here, performing for you. If you know the words, you can join in too (pic: YouTube) If you want a break from Slade and other Christmas regulars, former Rare employees have made an all new gaming themed single. Now that December is here, it’s now impossible to walk into any store without hearing […]

Martin Lewis fans say the Oodie has saved them money on their heating bills (Picture: Oodie) Nothing puts a dampener on retail therapy like remembering utility bills, but it’s something people across the country are having to consider this Black Friday. The cost of living crisis has put paid to ‘frivolous’ purchases for many, as […]