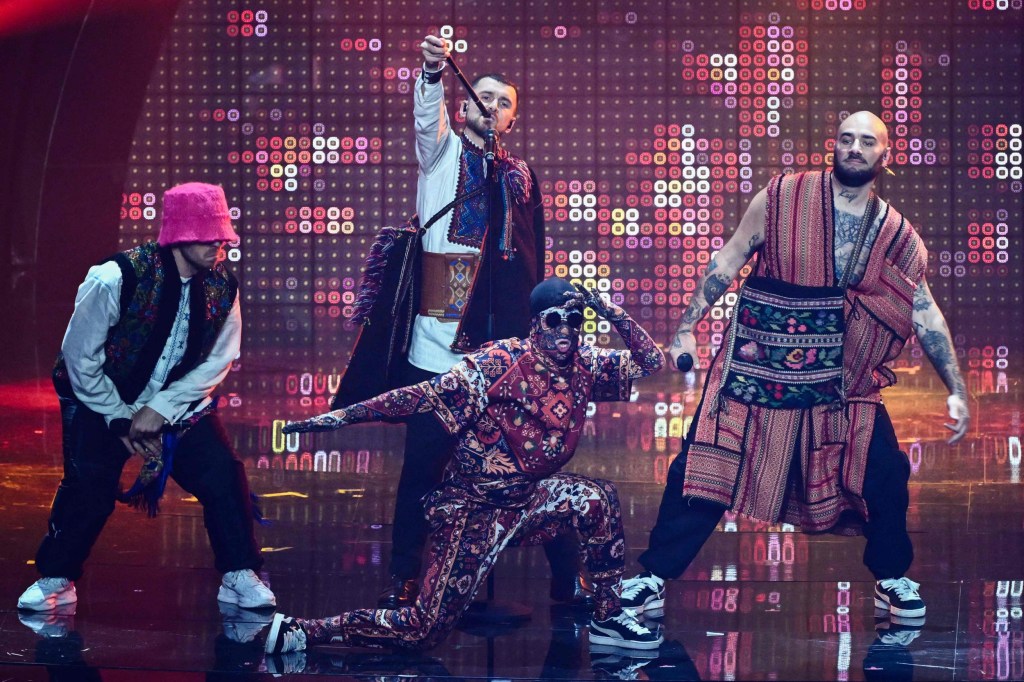 Kalush Orchestra’s performance has us in our feels tonight (Picture: AFP)

Kalush Orchestra’s performance has us in our feels tonight (Picture: AFP)

Ukraine band Kalush Orchestra’s poignant performance at this year’s Eurovision had viewers in tears as they took to the stage in Turin tonight.

The rap group had the honours of representing Ukraine this year with the song Stefania, and, well, not only is the song a certified banger but due to the situation in the band’s country at the minute, hits us in the feels in such a different way.

Both those watching in person, as well from home, were feeling the emotion as they reacted to the tune, with many revealing they were tearing up at the presence of the group at this year’s event at Italy’s PalaOlimpico Arena.

One mused on Twitter: ‘For obvious reasons I’ve never shed a tear at anything #Eurovision but my word that got me.’

Another wrote: ‘Got to admit I had a wee tear in my eye at the end of Ukraine’s performance’ as one added: ‘Ukraine brought a tear to my eye.’

It seems others were so taken with the performance it’s changed their picks for winner: ‘Ukraine wasn’t my #1 favorite song but I was very emotional just seeing them onstage. Won’t be upset if they win.’

The group is one of the front runners of the competition (Picture: AFP)

According to those there, at the end, they asked the audience to please help Ukraine and Mariupol amid the ongoing Russian invasion.

Stefania was written to honour member Oleh Psiuk’s mother, who heard the song for the first time when it was performed live at the Ukrainian National Final.

Anyone else with a tear in their eyes when #Ukraine performed? #Eurovision

What an emotional moment! What a wonderful song! Let’s have the #ESC2023 in Kyiv ðð #Eurovision #Ukraine #UKR pic.twitter.com/mLQo3lbWhQ

The collective – which consists of Psiuk, multi-instrumentalist Ihor Didenchuk and dancer Vlad Kurochka, and were formed in 2019 – has a name that is even an ode to their hometown of Kalush, situated in the Ivano-Frankivsk Oblast of western Ukraine.

That and lyrics such as: ‘I‘ll always find my way home, even if all roads are destroyed,’ have taken on new meaning since the war began.

Speaking to i, Kalush Orchestra rapper Psiuk said he was is hopeful that in the event of a Ukrainian victory, ‘Eurovision next year [will be] in the free home and reconstructed and rebuilt and happy Ukraine’.

Should the invasion still be ongoing and Ukraine is unable to host, it is likely that one of the big five Eurovision countries – France, Germany, Italy, Spain and UK – will host the event.

Chloe finds images of herself on Noah’s laptop (Picture: ITV) Noah Dingle (Jack Downham)’s approach to women on Emmerdale has always been a little bit difficult, but in upcoming episodes we’ll see how his obsession with Chloe Harris (Jessie Elland) has turned into full-on stalking. When Noah invites Chloe to hang out at his house […]

Sir Michael Palin heading on ‘eye-opening’ journey to Iraq for next travel series: ‘Our story is one of survival’

Liverpool are full of confidence after winning the FA Cup on Saturday (Picture: Getty Images) Liverpool travel to Southampton on Tuesday night knowing they need to win to keep their Premier League title hopes alive. Victory for the Reds would put them back within one point of Manchester City with one game to play. Jurgen […]