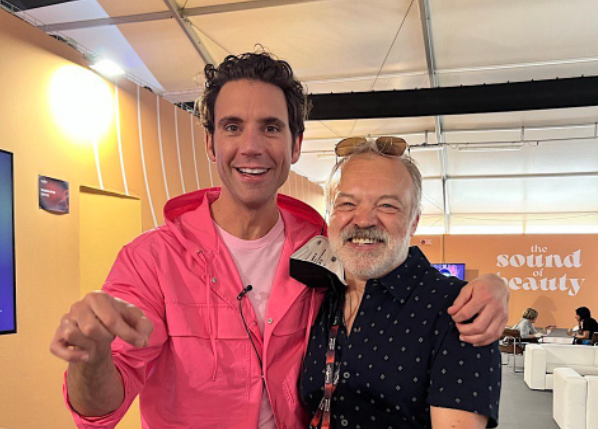 Mika and Graham Norton giving us all the fomo (Picture: Twitter)

In a glorious backstage reunion, Eurovision host Mika and UK commentator Graham Norton got chummy ahead of the 2022 song contest.

Mika is hosting this year’s final – after also helming both semi-finals alongside Italian TV presenter Alessandro Cattelan and singer Laura Pausini – and looked cool calm and most collected in the behind the scenes snap.

Wearing a pink jacket over a pink T-shirt, the Grace Kelly singer embraced the host of the Graham Norton Show, who looked absolutely chuffed to be joining the song contest for another year.

Prepped for a long night of sassy quips ahead, Graham was toting a folder – full of Eurovision secrets, we can only assume – in what appeared to be a backstage lounge area.

Alongside the snap, Mika wrote on Twitter: ‘Look who I bumped into backstage! A true legend of @eurovision!

‘So good to see you again @grahnort #eurovision.’

Look who I bumped into backstage! A true legend of @eurovision! So good to see you again @grahnort #eurovision pic.twitter.com/H30jtaYYbs

At this year’s competition, in Turin, Italy, Britain has yet another chance to go for gold after the UK unluckily placed last two years in a row – with last year’s entry, James Newman’s Ember, scoring ‘nil points’.

The nation’s hopes and dreams are now pinned on TikTok star Sam Ryder, representing the UK with his hit song Space Man. And what a banger.

This year’s competition is located in Turin, Italy’s PalaOlimpico Arena – following the country’s victory at the 2021 contest with rock band Makeskin, who will return to the Eurovision stage tonight to perform their latest single Supermodel, which was released yesterday.

This year, 25 countries from Europe (and a few beyond) are competing in the annual music competition, all hoping to walk away with the most points on the night. Make sure to download your sweepstakes kit, by the way…

Alongside Ukrainian rappers, yellow wolves from Norway and women singing on stages seemingly made from loo roll, our very own Sam Ryder is hoping to get way more than nil point for the United Kingdom with his song Space Man, and for the first time in a long time, it looks like the left hand side of the leaderboard is a shoe in for the UK.

MORE : How old is Eurovision 2022 presenter Mika and when was hit song Grace Kelly in the charts?

What a performance! (Picture: Getty Images/AFP) Sam Ryder sang his heart out as he represented the UK at the Eurovision 2022 final, and fans couldn’t be more proud of the enormously talented singer. After performances from acts including Ukraine’s Kalush Orchestra, Norway’s Subwoolfer and Serbia’s Konstrakta, Sam was the 22nd act to take to the […]

Dan Walker sure won’t miss his early starts for BBC Breakfast (Picture: BBC) Dan Walker has shared his morning routine ahead of his last day at BBC Breakfast, and we’ll never complain about having to get up early ever again. The 45-year-old presenter will front his last show on the programme on Tuesday before he […]

‘Lab on the skin’ can monitor several health statistics at once, in real time

The device can be worn on the upper arm while the wearer goes about their day – whether they’re at the gym or the pub (Credits: UC San Diego) A new wearable gadget can monitor blood sugar and alcohol levels as well as muscle fatigue during workouts. The tiny monitor, which is about the size […]