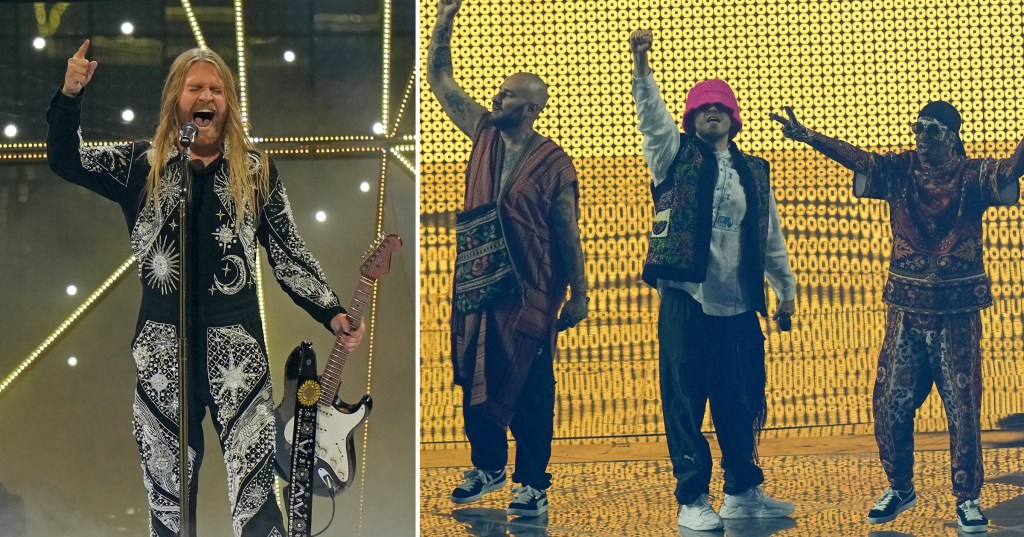 It was a tough call! (Picture: AP)

Ukraine’s Kalush Orchestra have stormed to victory at Eurovision 2022, winning in tonight’s final and beating UK entry Sam Ryder as they topped the leaderboard.

Tonight, the final stage of the song contest aired on BBC One, with the competition heating up for the last stage as 25 songs were performed by the contestants.

In the lead-up to the final, bookmakers predicted that Kalush Orchestra and Sam both had strong odds of being crowned the winners.

However, in the end, there could only be one act that went home with the trophy, and it was Kalush Orchestra’s time to shine after their stellar rendition of their hit song Stefania.

Sam blew viewers away with his stellar performance of Space Man, as people in the UK expressed how ‘proud’ they were of the singer.

Meanwhile, Kalush Orchestra left audiences around the world in tears with their powerful performance of their track Stefania.

When the results were being announced, it was revealed that Ukraine, Azerbaijan, Germany, Belgium, France, Georgia, Austria and the Czech Republic had awarded their coveted 12 points to the United Kingdom, much to viewers’ jubilant astonishment.

The UK soared to the top of the scoreboard after the jury votes with 283 points, with Sweden in second place with 258 points and Spain placing third with 231 points before the televote confirmed the winner.

This year’s competition has been eventful to say the least, with several of this year’s entries setting tongues wagging before the grand final had even taken place.

Serbia’s act Konstrakta performed a track called In Corpore Sano, which took everyone aback when it included lyrics about Meghan Markle’s luscious hair.

During a recent chat with Metro.co.uk, Sam spoke out about the ‘negative stigma’ that many people in the UK have towards Eurovision, saying that he thought the ‘negative loop’ was ‘needless’.

Sam beamed as he was interviewed while the jury votes were counted (Picture: BBC)

‘I would love it if we could even just have a conversation about that negative stigma and how it was perpetuated how we’ve got to the place where we are now where it’s got so almost toxic, that we believe that Europe doesn’t like the UK,’ he said.

While Eurovision is known for spreading joy on an annual basis, in Ukraine, the competition continued against the backdrop of the ongoing war with Russia.

Ukraine’s commentator for the competition, Timur Miroshnychenko, delivered his usual broadcast from the safety of a bomb shelter, as a precautionary measure in case of any air raids.

UK hopeful Sam Ryder: ‘We need to turn off this toxic negative stigma towards Eurovision’

Eurovision drinking game rules for 2022 song contest – can you handle it?

Does Kurt Zouma still have his pet cats?

West Ham defender Kurt Zouma has been charged and pled guilty under the Animal Welfare Act (Picture: Visionhaus/Getty Images) West Ham’s Kurt Zouma has pled guilty to kicking and slapping his cat. A Snapchat video of the Premier League footballer drop-kicking his Bengal cat emerged in February 2022 – with another disturbing clip showing him […]

To view this video please enable JavaScript, and consider upgrading to a web browser that supports HTML5 video Footage shows two British glamour models punching and kicking each other in a brutal street fight outside a nightclub in Slovakia. Crystal Foster, 26, says she was assaulted by a bouncer at Mow Bar, in Bratislava, before […]

Deadly danger lurks ahead for some soap residents, while others have some explaining to do! (Picture: ITV / BBC / Lime Pictures) Lives are on the line across pretty much all of the nation’s biggest soaps next week, with death a possible outcome for a number of the genre’s finest. A devastating car crash takes […]