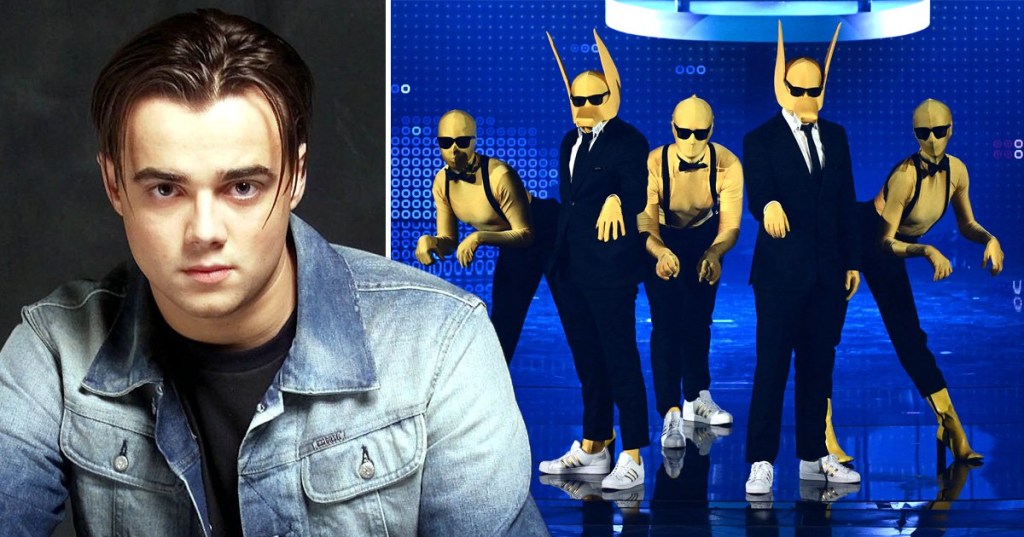 Is it really him?! (Picture: Rex/Getty)

The Eurovision 2022 final has officially kicked off, as fans wait to discover who will walk away the winner of this year’s competition.

One of the biggest talking points so far has been Norway’s Subwoolfer, as the UK’s commentator Graham Norton reminded everyone that it’s highly suspected Ben Adams of A1 fame is behind one of their masks… and we’re obsessed.

Before top contenders Ukraine’s Kalush Orchestra and the UK’s Sam Ryder graced the stage, Norway were seventh to perform, as pop duo Subwoolfer delivered a rendition of their track Give That Wolf A Banana that had the entire arena on their feet.

If the reaction among viewers on social media was anything to go by, their ‘bonkers’ and ‘genius’ performance quickly made them many people’s favourites, as several said they’d clinched their vote.

However, some couldn’t help but bring up their suspicions once again that Ben, best-known as a member of British-Norwegian boy band A1, is one half of the act.

‘Christ alive I KNEW it was Ben Adams,’ one convinced viewer said after watching the duo take to the stage.

‘I’m so glad @grahnort said about Ben Adams as it was driving me mad where I knew the voice from! 100% that was Ben,’ another remarked.

One person said that they ‘needed proof’ it was Ben before accepting that was the truth.

‘If the rumour that one of these people is Ben Adams from A1 is true I will actually die,’ another quipped.

Ben Adams?! One of the biggest celeb loves of my life Ben Adams?! ð #NOR #Eurovision

WAIT. I mean, Iâm gonna need to know if one of Subwoolfer is Ben Adams from A1 because thatâs a game changer ð #EurovisionÂ  #NOR https://t.co/xM2RRBY4Zj

I hate that I remembered who Ben Adams was before Graham mentioned A1. Imagine if I could remember useful information #Eurovision

Ben Adams from A1 is a wolf with a banana?? What #Eurovision

If it does turn out that Ben is part of Subwoolfer, he would be joining A-list company at this year’s Eurovision.

UK hopeful Sam Ryder: ‘We need to turn off this toxic negative stigma towards Eurovision’

Eurovision drinking game rules for 2022 song contest – can you handle it?

Not only is singer Mika one of the hosts of the competition, but The Rasmus proved a huge hit as the In The Shadows band performed their song Jezebel, drawing comparisons to the creepy villain of horror film IT.

Eurovision sure does know how to take its audience by surprise!

The Eurovision grand final is currently airing on BBC One and BBC iPlayer.

Max, who plays Ben, ‘kept his distance’ from Aidan ahead of filming the upsetting scenes (Picture: BBC / Jack Barnes / Kieron McCarron) EastEnders star Max Bowden has revealed that he avoided co-star Aidan O’Callaghan in the build-up to the show’s devastating rape storyline. Ben Mitchell, played by Max, will be raped by Lewis Butler […]

Toyah gets an update (Picture: ITV) Toyah Battersby (Georgia Taylor) thought she’d seen the last of Elsie a few weeks ago in Coronation Street. Elsie’s exit happened in the aftermath of Toyah discovering Imran (Charlie de Melo) had slept and had a baby with Abi (Sally Carman). After throwing Imran out, Toyah was told by […]

Selling Sunset: Heather had actually eaten an Oreo before the reunion in resurfaced clip