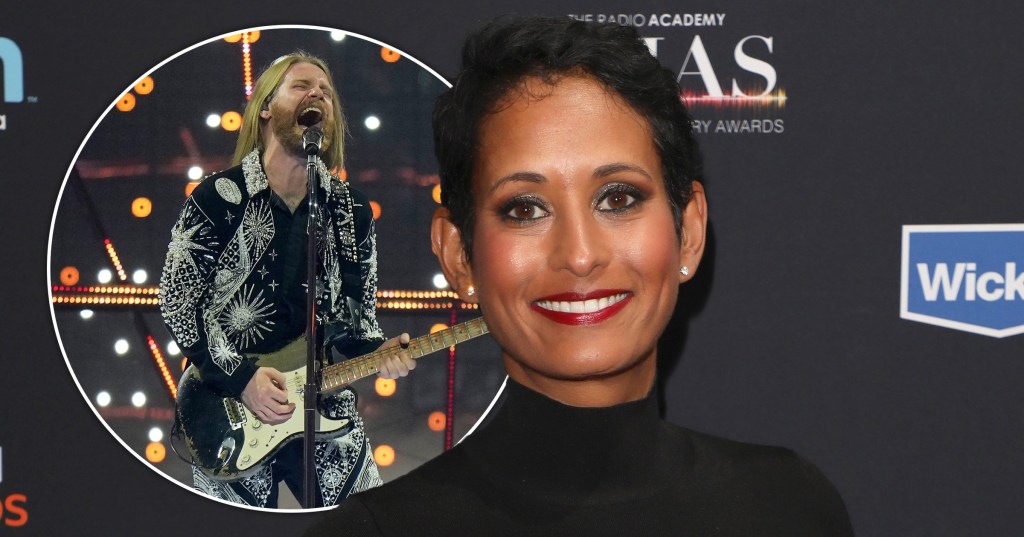 Naga called out the voting system and it got awks (Picture: AGP/Getty)

Naga Munchetty is not here for people thinking the UK could win the Eurovision Song Contest 2022.

This year, Sam Ryder will take to the stage in Turin, Italy, where he’ll represent the United Kingdom with his song Space Man.

The track has been well received by Eurovision fans, and plenty of people are getting their hopes up and, let’s face it, optimism is what we need right now after finishing with zero points last year.

However, BBC newsreader Naga called out the competition’s voting system on air, saying she didn’t believe it was a ‘fair process.’

Joined by her BBC Breakfast co host, Charlie Stayt, the pair discussed the grand final this weekend and whether Sam is in with a chance of taking home the title.

Charlie told viewers that the UK’s entry doesn’t, in fact, stand a chance, to which Naga agreed, however, she went on to question the voting to an actual Eurovision correspondent – yikes.

The presenters do not fancy the UK’s chances at Eurovision this year (Picture: BBC)

It started when Charlie refused to continue reading the autocue after it said there was ‘growing optimism’ the UK could Eurovision.

‘What it says is it might finally be the UK’s year, but we all know that is not going to happen because Ukraine has tipped everything on its head and changed things right?’

‘The UK’s entry Sam Ryder is right up there among the favourites for the final. Now, here is us predicting, what do we know?’, Naga ddded.

BBC’s media and arts correspondent David Sillito then joined the call, live from Italy, where he has been reporting in the build up to the grand final on Saturday.

However, Naga landed herself in hot water when she doubted the voting, saying: ‘That was our speculation about how the voting would go, and I would not say it’s a fair process always, would you?’

Sam is going to give it his all this weekend (Picture: EBU/Andres Putting)

David retorted: ‘I would say it is evidently fair, that’s an outrageous slur on poor Eurovision there, it is also entirely unpredictable.’

‘You do not know what is going to go on and what drama we have had at the semi-finals,’ he continued.

‘Poor Ireland, poor, poor Ireland is out. There was such hope they would get through to the final.

‘You have got to remember Ireland is Eurovision royalty having won, I think, seven times.

‘Serbia and Finland were through and they are truly an example of how bizarre Eurovision can be.’

Despite Naga and Charlie feeling pretty pessimistic about the outcome this weekend, David seemed to disagree, saying he thinks it could be the ‘UK’s year.’

Derry Girls star Siobhán McSweeney: ‘A sitcom should not be teaching people the history of Northern Ireland’

To view this video please enable JavaScript, and consider upgrading to a web browser that supports HTML5 video Derry Girls star Siobhán McSweeney has spoken of her ‘heartbreak’ of the Good Friday Agreement being ‘in danger’ as the series comes to an end. After three series and an extended special, Lisa McGee’s acclaimed Channel 4 […]

Iryna Zemlyana threw red soup at the ambassador as symbol of the blood spilt in her homeland (Pictures: @iryna.zemlyana/Newsflash) A Ukrainian refugee who threw soup at a Russian ambassador said she has had to flee for her safety for a second time because people are threatening her life. Iryna Zemlyana ran away from her home […]