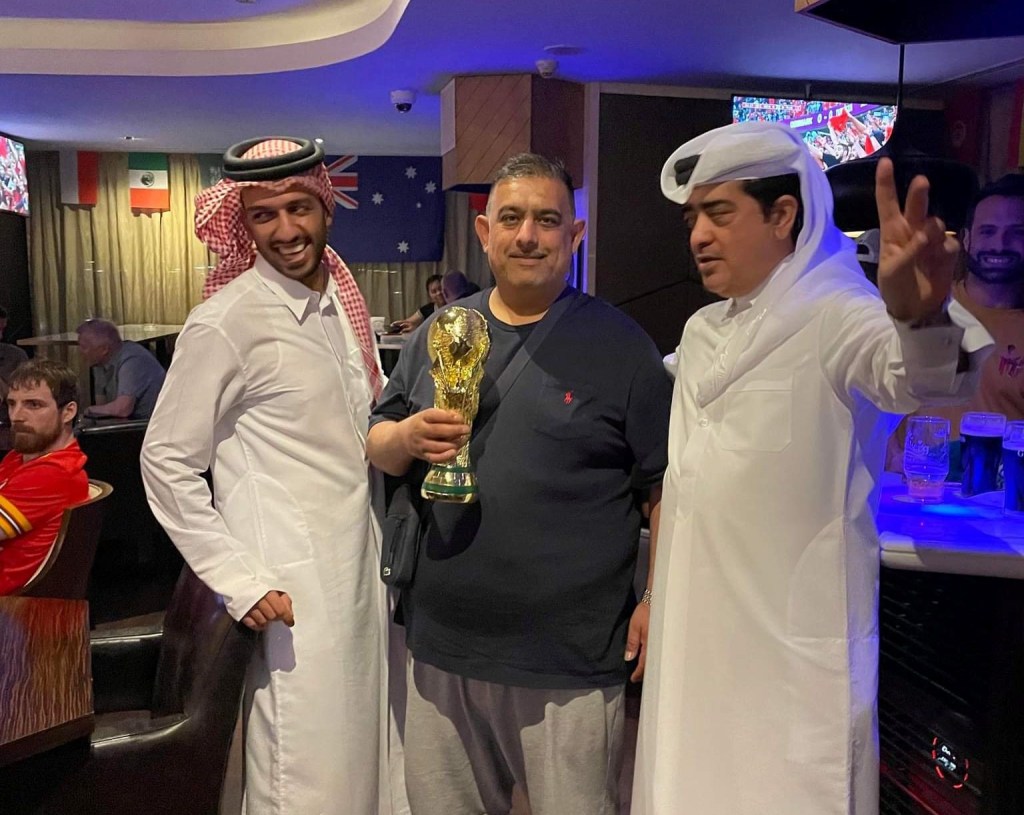 A friendship spurred by the Wolverhampton Wanderers (Picture: SWNS)

A friendship spurred by the Wolverhampton Wanderers (Picture: SWNS)

A group of England fans were invited to lunch at a Qatari millionaire’s mansion – after he spotted one of them wearing a Wolverhampton Wanderers shirt.

Jassa Dehal and his pals were left stunned when the wealthy businessman sent a car to pick them up from their hotel in Doha the day after meeting him in a bar.

Jassa had struck up a conversation with the man, known only as Omar, the night before after he spotted him wearing a Wolves shirt.

They quickly bonded over their love of football and exchanged numbers.

Jassa got a message out of the blue the next day saying: ‘There is a car waiting for you.’

The friends were then transported to Omar’s sprawling mansion where he had laid on a five star feast for lunch – including a football-themed fruit platter.

They were then given a tour of the massive property, invited to swim in his pool before they all stayed to watch Japan’s shock 2-1 victory over Germany.

Jessa, who runs a butchers in Wolverhampton, said the experience had been ‘amazing’ and they had been ‘blown away’ by their host’s kindness.

Jassa Dehal and his pals had travelled to Qatar to watch England when they struck up a conversation about football with a man at their hotel bar (Picture: SWNS)

To his surprise the man later turned out to be a Qatari prince, who invited Jassa and his pals round to his sprawling mansion the next day to meet his family and watch the game (Picture: SWNS)

He said: ‘You cannot even dream of what happened to us. We were in the bar of our hotel and he came over and said he knew Wolves.

‘He noticed my Wolves shirt and we started talking about football, Wolves, Raul Jimenez and he said he was a Manchester United fan.

‘He was really knowledgeable and knew a lot about Wolves, he knew we’d sacked the manager.

‘He was such a nice, hospitable man, he started buying our food and drinks and didn’t allow us to pay, but wanted to make us feel welcome in his home-country.

‘So we sat with him, had a great conversation about football and he then said we can come to his house tomorrow for lunch, and he took my number.

‘Next day I get a call from him saying his driver is waiting outside our hotel to take us to his place.

‘It said, “There is a car waiting for you”. We couldn’t believe it. We were shocked, as we didn’t expect that to happen at all.

‘We went to his house which was a massive mansion. We then sat with him, had tea and biscuits and he showed us around the house.

‘Then we all watched the Germany vs Japan match and we sat and ate with him in the dining room on a huge dining table.

Elden Ring – you’re not getting this for less than £37 (pic: Bandai Namco) This article contains affiliate links. We will earn a small commission on purchases made through one of these links but this never influences our experts’ opinions. Products are tested and reviewed independently of commercial initiatives. They’re easy to miss, but a […]

To view this video please enable JavaScript, and consider upgrading to a web browser that supports HTML5 video It was the crime that shook the country and led to a decade-long fight for justice and now the highly anticipated trailer for the drama series Litvinenko has been released. Set to stream on the new service […]