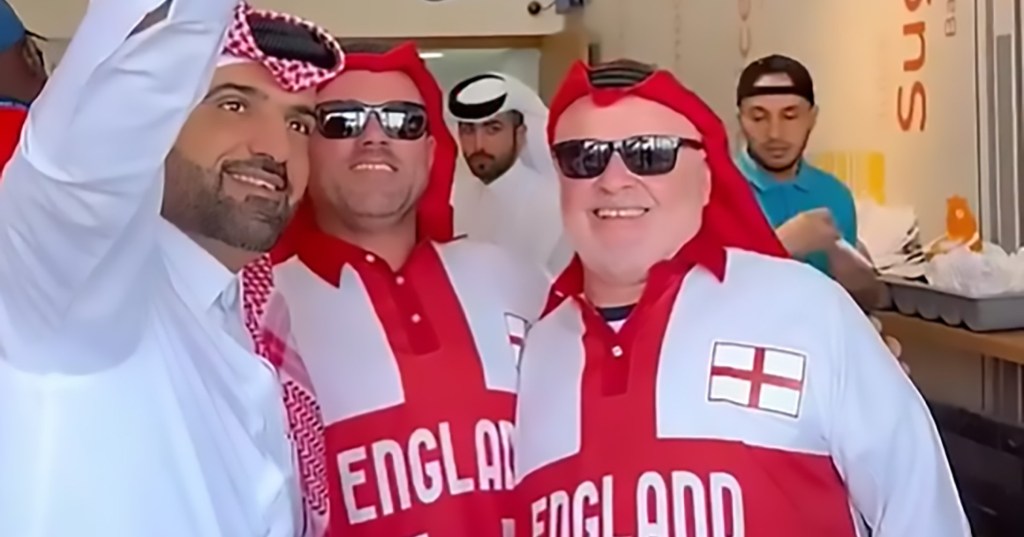 England fans who travelled to Qatar for the FIFA World Cup are adopting a new dress code.

There, Hamad Al Jameela, a popular Qatari influencer, can be seen helping them put on traditional Arab thobes.

The ankle-length robe, usually with long sleeves, is commonly worn in the Arabian Peninsula, the Middle East and North Africa.

This one is decorated with a big St George’s Cross, and the word England across the chest.

Mr Al Jameela can also be seen helping the fans put on the red headdress, which is worn by men of all ages.

He wrote in the caption: ‘World Cup fans in Arab uniforms.’

The clip has already been watched more than 550,000 times, while another similar one boasts nearly 900,000 views.

Contrary to many reports coming out of Doha, some England football fans seem to be enjoying the tournament.

Earlier this week, two fans claimed they had the night of their life partying with lions, exotic birds and the son of a Sheikh as they hunted for late-night beers.

England will face the US on Friday evening, after Monday’s 6-2 win against Iran.

Neymar’s dad says his son will be fit for World Cup final, should Brazil get there

Neymar could have played his last game at this World Cup (Picture: Getty Images) Neymar will be fit for the World Cup final, should Brazil get there, believes his father as he gives an update on his son’s ankle injury. The Paris Saint-Germain forward was taken off during Brazil’s opening game win over Serbia with […]

Defending the tournament, Gianni Infantino said he knows what it’s like to be discriminated against because he used to have red hair (Picture: Lee Wells/SWNS) A pub landlord has pledged to donate any money he makes from the World Cup to an LGBTQ+ organisation after being left disgusted by ‘corrupt’ FIFA. Outrage has been sparked […]

Tetiana Reznychenko huddles in her flat, which has no electricity, heating and water (Picture: Reuters) Ukrainians have been warned to brace themselves for a ‘life-threatening’ winter after Russian artillery strikes left millions without power and hospitals unable to function properly. President Volodymyr Zelensky used his nightly address to urge people to conserve energy, particularly in […]