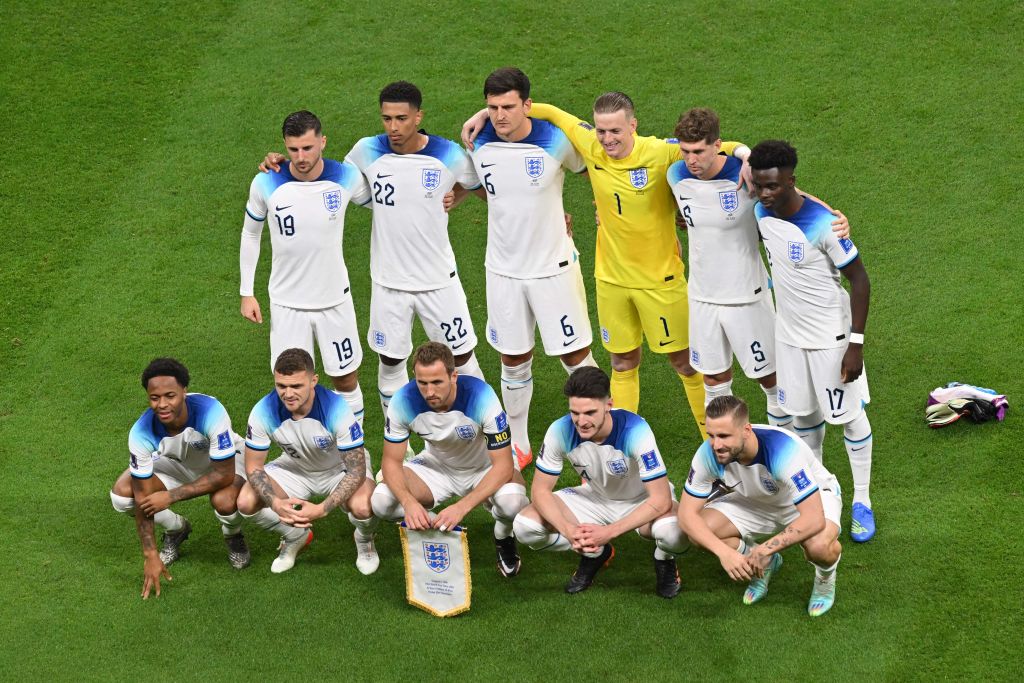 England lining up before the clash with USA (Picture: Getty Images)

The start of the England vs USA match on Friday went off without protest as the Three Lions chose not to make any kind of stand against FIFA banning the OneLove armband at the World Cup.

England, along with six other European nations had planned to wear the OneLove armband in Qatar, as a sign of inclusivity and anti-discimination.

However, shortly before their opening game against Iran on Monday it was made clear to them that sporting sanctions would be imposed if they did, namely a yellow card for captain Harry Kane, but possibly more.

England and the other nations – Wales, Germany, Belgium, Netherlands, Switzerland and Denmark – all chose to fall into line and not wear the strap as a result.

Kane wore the official FIFA armband, which had a message of ‘No Discrimination’ on it, but did not sport the rainbow colours of the OneLove band.

Germany began their campaign against Japan on Wednesday and also did not wear the OneLove straps, but did pose for their team photo with their hands covering their mouths, suggesting they had been silenced by FIFA.

Germany made it clear they felt silenced by FIFA’s stance on the OneLove armband (Picture: Getty Images)

England chose not to make such a stand and have continued their World Cup campaign with the official FIFA captain’s armband with no visible protest against the decision on the OneLove strap.

FA Chief Executive Mark Bullingham explained to ITV Sport what happened ahead of the Iran game on Monday when FIFA officials made threats over the armband.

‘It’s very important to understand what happened here,’ he said. ‘We have been clear that we wanted to wear it and we were committed. We announced that we would do that in September we had a lot of meetings with FIFA over that period and on Saturday before the game we felt we’d reached an understanding where we would wear it. We hadn’t got permission but we would face a fine for it.

‘Unfortunately then on the day of the game they gave us ten minutes notice – two hours before we were due to go to the game… they came here with five officials and they ran us through a scenario where at a minimum anyone wearing the armband would be booked and face disciplinary action on top of that.

‘It was unlimited. They would take disciplinary action against any player that was wearing the armband on top of having a yellow card.’

There was, however, a declaration of support for the LGBTQ+ community and a show of solidarity back home as the Wembley Arch was lit up in rainbow colours.

We’re with you â¤ï¸ pic.twitter.com/SoqNDakeBM

Alongside an image of Wembley, the England team’s official account tweeted: ‘We’re with you.’

David Beckham gave a cheeky wave as he took up his seat in the stands (Picture: Reuters) David Beckham was in cheerful spirits as he grabbed a seat before the anticipated England vs Iran game at the Qatar World Cup.  The retired footballer, himself former captain of the England team, donned a smart suit and […]

The beef is real between Will Ferrell (left) and Aaron Ramsdale (right) (Picture: getty / rex) Will Ferrell and England goalkeeper Aaron Ramsdale have officially got beef as the pair traded expletive-ridden insults over who would win between England and the USA at the World Cup. With the football World Cup heating up in Qatar […]