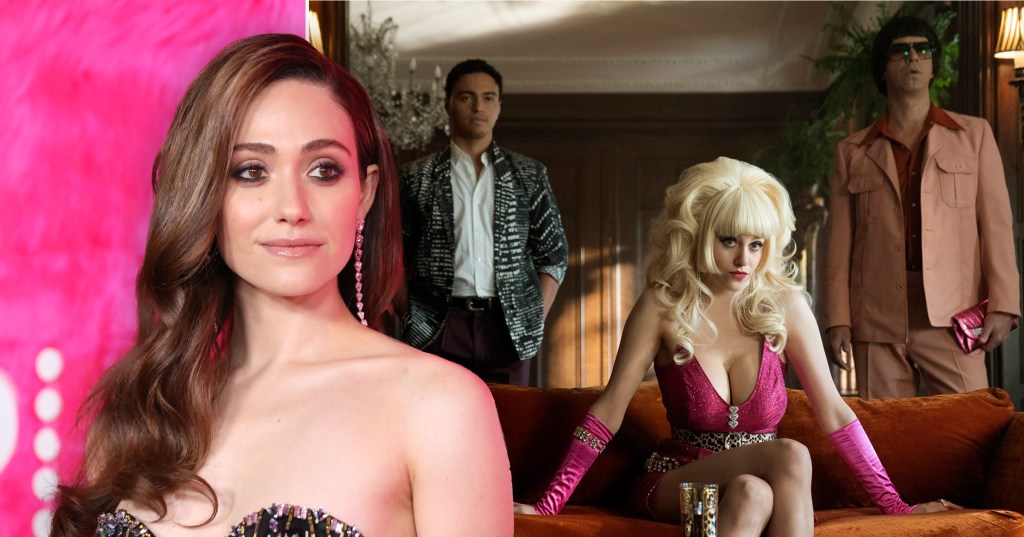 Emmy Rossum is very dedicated to her craft (Picture: REX/Getty)

Emmy Rossum revealed she developed blisters from the fake breasts she had to wear to transform into titular blonde bombshell Angelyne for Peacock’s upcoming limited series.

The 35-year-old Shameless star plays the 1980s pinup, who became famous after featuring on a series of iconic billboards in LA.

She revealed she underwent between four and five hours in makeup every morning before most of her co-stars had arrived on set, and suffered tear duct issues from wearing two pairs of contact lenses – as well as from all the heavy eye makeup worn during filming.

‘The physicality of the character was challenging,’ Emmy told The Hollywood Reporter. ‘The body is heavy, yet it has to feel light and effervescent. But I just kept focusing on how lucky I felt. This opportunity is really every actor’s dream. You raise your hand and you say, “Hey, I’d like to play this, and this is how I envision the story”.

‘I found it to be completely liberating to look in the mirror and not see myself at all. At first, it’s unnerving.

‘But feeling lost gives way to this real liberation – from myself and the hang-ups that can impede a performance.’

Emmy’s husband and collaborator Sam Esmail, who co-produced the series with his wife, admitted to the publication that he sometimes didn’t even recognise her on set.

‘When I say that there are times where I did not recognise her because she was lost in this person, I really mean it,’ he said. ‘This is my wife I’m talking about. It’s kind of eerie.’

The drama is based on the Hollywood Reporter’s investigative article about the enigmatic Angelyne.

Angelyne, 71, was going to contribute to the series after meeting with Emmy and director Lucy Tcherniak, but pulled out after delays caused by the pandemic.

Meanwhile, Emmy also briefly addressed the controversy following reports she is playing Tom Holland’s mother in new series The Crowded Room, despite there only being 10 years between them.

Emmy takes on the role of Candy, the mother of Tom’s character Danny, in the Apple TV+ series, during which she will appear in flashback scenes.

‘I understand the response, but when people see the way in which the role functions — I’m ageing backwards and forwards — it’ll make sense,’ she added.

The thriller, which Tom, 25, is also serving as an executive producer on, will follow inspirational …read more

All eyes on Putin as Finland formally applies to join Nato

Prime Minister of Finland Sanna Marin and President of the Republic of Finland Sauli Niinisto have confirmed the news today (Picture: Heikki Saukkomaa/REX/Shutterstock) Finland has officially announced plans to join Nato, despite increasing warnings from Russia. The Kremlin previously said the potential move was ‘definitely’ a threat which would be met with ‘retaliatory steps’. Finland’s […]

Mellor has been hailed as ‘big-hearted’ by Jones, who worked with her on Fat Friends (Picture: Getty Images) Fat Friends actress Ruth Jones has remembered the programme’s writer Kay Mellor as ‘one of television’s greats’ following her death.  Mellor, also best known for her work on Band of Gold and Girlfriends, died on Sunday night […]

Wendy Marks claims the grocer told her ‘they no longer deliver to “caravan parks” as the drivers felt unsafe’ (Pictures: Wendy Marks/BPM Media) A woman has slammed Tesco after they refused to deliver shopping to her static home because ‘caravan parks make drivers feel unsafe’. Wendy Marks, 53, says she felt ‘discriminated against’ by the […]