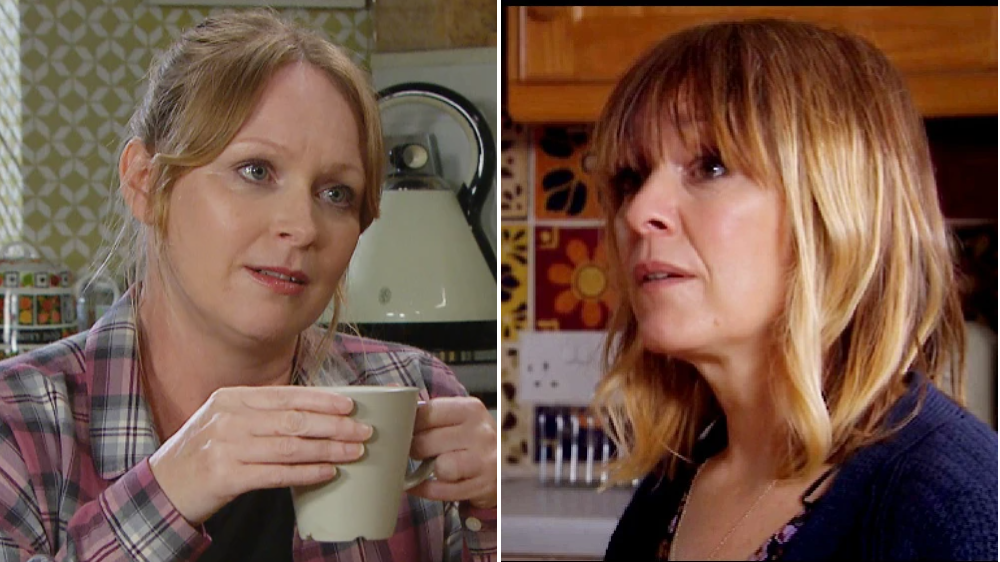 Can they repair things before Vanessa says goodbye? (Picture: ITV)

It’s all change at the veterinary surgery and all change in Emmerdale, as a new ownership at the vet’s sparks one character to leave the village in search of pastures new.

Rhona (Zoe Henry) is offered a share in the business by Kim (Claire King), who is selling Jamie’s 25% share. In return, Kim wants 15% off veterinary bills – and for someone who owns horses, like Kim does, veterinary bills are not cheap so 15% is a massive discount and a big hit to the surgery’s finances.

Vanessa (Michelle Hardwick) is angry when Rhona tells her about this deal – and announces that she’s decided to accept a job in Canada!

The whole situation descends into a blazing row, with both women dredging up things from their past. And they do have quite a past together.

They were friends at university and Vanessa came to the Dales after Rhona hired her to work at the practice.

In 2013, Vanessa discovered that Rhona was addicted to painkillers. Vanessa later admitted that she’d fallen in love with Rhona, and Rhona played on this fact to keep Vanessa supplying her with pills.

The two had a brief affair which ended when Rhona took an overdose.

Their affair was used by evil Pierce Harris when Vanessa started being suspicious of the way he treated Rhona and he used their past as a way to make Rhona distrust her friend.

All the same, it was Vanessa who Rhona confided in after Pierce raped her on their wedding day.

With all this shared history there’s plenty of ammunition for the two women to have the most spectacular argument and it’s not long before they hit rock bottom in their friendship.

Can they repair things before Vanessa says goodbye to the Dales for a new life in Canada?

MORE : Emmerdale spoilers: ‘Betrayed’ Samson is isolated as his family unite with Amelia

MORE : Emmerdale spoilers: Aftermath of Moira exit revealed as Cain finds out she has left

Alvaro Morata scored just eight minutes after coming off the bench (Photo: Getty) Germany have kept their World Cup dreams alive but their destiny is out of their hands after finding a late equaliser against Spain. A thrilling game at the Al Bayt stadium ended 1-1 after Niclas Füllkrug’s strike cancelled out Alvaro Morata’s opener. […]