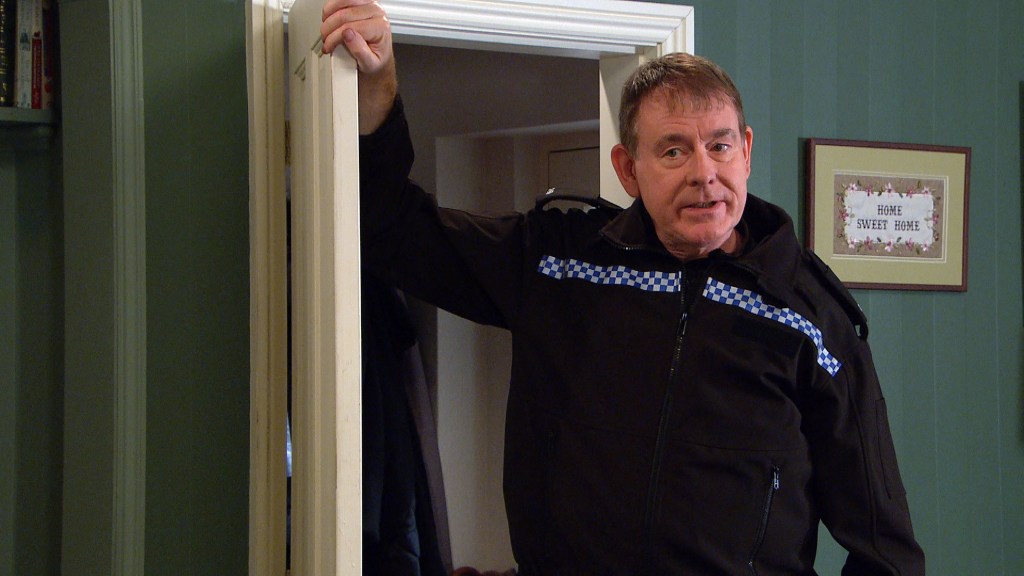 It was a busy day for PC Swirling (Andy Moore) in tonight’s Emmerdale as he had more than one incident to deal with in an episode that was packed full of incidents – and crime.

His first stop was to talk to Faith (Sally Dexter) about her actions yesterday when she tricked her way into Angus’s house to grab her box of memorabilia. Angus had complained to the police that Faith had stolen a biscuit tin.

‘Biscuit tin?’ Faith said sarcastically. ‘I’m just so glad that you’re out there using all those precious resources to keep Yorkshire safe.’ She insisted she’d been at home all day yesterday, but PC Swirling wasn’t having that and said she was under arrest for suspected theft.

At this point, Faith said she could barely walk without oxygen and a zimmer frame – somewhat stretching the truth for dramatic affect. ‘What does she mean?’ the police officer asked Chas (Lucy Pargeter). ‘She’s got cancer,’ Chas replied.

A shocked Swirling quickly apologised for bothering them and left. Faith was highly amused.

PC Swirling’s next task was in response to Matty (Ash Palmisciano) planting the holdall full of drugs in Suzy (Martelle Edinborough)’s car and then tipping off the police. Suzy had no trouble acting innocent, because she was in fact innocent. Matty, parked nearby so he could watch the satisfying moment when Suzy got arrested, was in for disappointment, though. As PC Swirling opened the boot of Suzy’s car he found nothing more criminal than a karaoke machine, put there by Leyla (Roxy Shahidi) who’d got the holdall of drugs safely back at Take A Vow by then.

So PC Swirling went on his way, no arrests made but a busy day nonetheless. After all, he’s a precious resource that keeps Yorkshire safe.

So clever (Picture: Robin Wagner / SWNS) Meet Satin and Blaze, the dynamic duo who’ve become closer since Blaze the dog lost his sight. Satin the cat has even found a way to help Blaze navigate the home they share together so that the visually impaired canine no longer steps on his feline sibling. Blaze […]