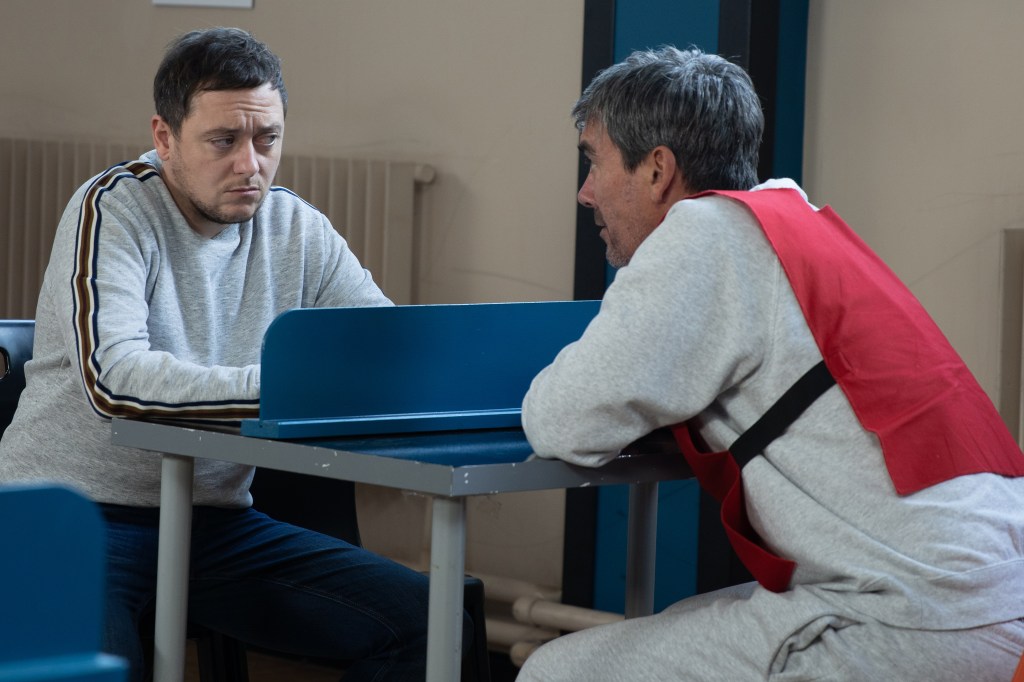 Nerves have frayed and nails bitten to the quick in anticipation of who will be the one to spill the beans on Kyle’s (Huey Quinn) hand in Al’s (Michael Wildman) murder in Emmerdale, so if you put a fiver on Matty (Ash Palmisciano) you might be in the big bucks.

Cain (Jeff Hordley) went to great pains to cover the fact that Kyle was the one wielding the gun when it shot Al and not him, but under pressure from his wife, he was backed into a corner and forced to confess to her.

He instantly regretted his words as she immediately made it obvious that she couldn’t be trusted to keep it to herself.

Meanwhile, Kyle himself blabbed to his mum Amy (Natalie Ann Jamieson), followed by Moira dobbing him in to Mack (Lawrence Robb). But though Matty (Ash Palmisciano) isn’t always the sharpest tool in the shed, he knows something is up and he wants in.

It doesn’t sit well with him that Cain would suddenly turn shotgun killer on Al for no apparent reason and like a dog with a bone, Matty won’t let it drop.

This could have terrifying consequences for Chas (Lucy Pargeter) who can see that Matty is on track to find out her own secret and blow the whole thing wide open, so she desperately tries to throw him off the scent.

But she’s left terrified when a curious Matty reveals he’s already scored himself a visiting order to see Cain.

With his stepdad in front of him, he lays out his theory but is surprised when Cain shoots him down.

Cain is pleased to think that he has put Matty firmly back in his box with fresh lies, but everyone is underestimating Matty.

He smiles and nods along, but instead of convincing him of the original story, Matty now believes not only has Cain lied to his face, but that he’s discovered the real reason Cain is in prison. Will he shop Kyle to the police?

Shaun Murphy tells Ronnie O’Sullivan: ‘You don’t have to be a rebel all the time’

Ronnie O’Sullivan and Shaun Murphy do not quite see eye-to-eye (Picture: Getty Images) Shaun Murphy believes Ronnie O’Sullivan has fallen short as an ambassador for snooker and feels he owes the game more than to talk it down, but does admit the Rocket is in a unique place in the sport. The Magician spoke out […]

Kim Kardashian spoke out on the Balenciaga controversy (Picture: Michael Kovac/Getty Images for LACMA) Kim Kardashian is ‘re-evaluating’ her relationship with Balenciaga after being ‘disgusted’ by ‘disturbing’ images used during the fashion brand’s recent campaign. Balenciaga faced widespread backlash after a recent campaign, which used photos of children posing with teddy bears in bondage. Kardashian, […]