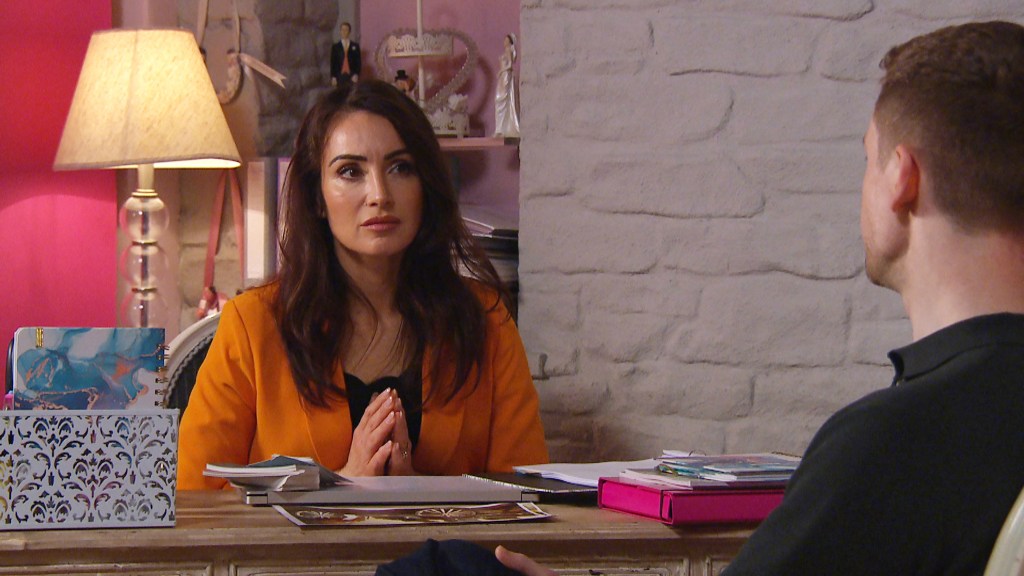 It was always going to end badly (Picture: ITV)

Leyla (Roxy Shahidi)’s life hangs in the balance in Emmerdale after Liam (Jonny McPherson) came home to discover her unconscious on the floor – with a bag of cocaine on the table nearby.

Already struggling under the pressure of having to store drugs for dealer Callum (Tom Ashley), Leyla was horrified when Callum came to get the drugs and they weren’t there – because Matty (Ash Palmisciano) had taken them to plant in Suzy (Martelle Edinborough)’s car. ‘You’d better find it or bad things will happen,’ Callum threatened her.

She did find it, after going to put a karaoke machine for Rhona (Zoe Henry)’s hen do in Suzy’s car and finding the drugs there. When Callum came back, Leyla tried to get him to take the drugs away, but he refused to let her out of their deal and insisted she carried on storing the drugs. He gave her a freebie as a ‘reward,’ and later on at home Leyla was at the end of her tether, and the drugs looked too tempting.

When Liam discovered her lying on the floor, he knew instantly what had happened and called an ambulance. Still grieving the death of his daughter Leanna, Liam pleaded with Leyla, You can’t leave me. I can’t go through this again.’

At the hospital Manpreet (Rebecca Sarker)was showing Jacob round because he hopes to study medicine there. He was horrified to see his mum being rushed in, in cardiac arrest. Victoria (Isabel Hodgins) arrived to support Jacob and they sat with Liam while the doctors battled to keep Leyla alive.

Jacob questioned the idea that Leyla was taking drugs, which was awkward for Victoria because she knows from David (Matthew Wolfenden) that Leyla is an addict. Liam thought the drug taking might have been a one off but Manpreet gently tried to explain that the circumstances indicated she was a habitual user.

A broken Liam couldn’t cope with this idea. He said that Leanna had her life cruelly taken, but Leyla knew what she was doing. ‘If she wants to throw her life away for a cheap thrill it’s up to her, but she’ll so it without me,’ he vowed.

Will Leyla survive? And if she does, will Liam leave her?

‘Multiple people dead after explosion and fires across Nebraska town’

Why Manchester United decided against appointing Graham Potter from Brighton

Octopath Traveler: Champions Of The Continent – a good game but it’s not the best of the month (pic: Square Enix) August has turned out to be the best month for smartphone games in a long time, with not a single dud and a rare 10/10 score. Adrift in the traditional summer games drought, this […]