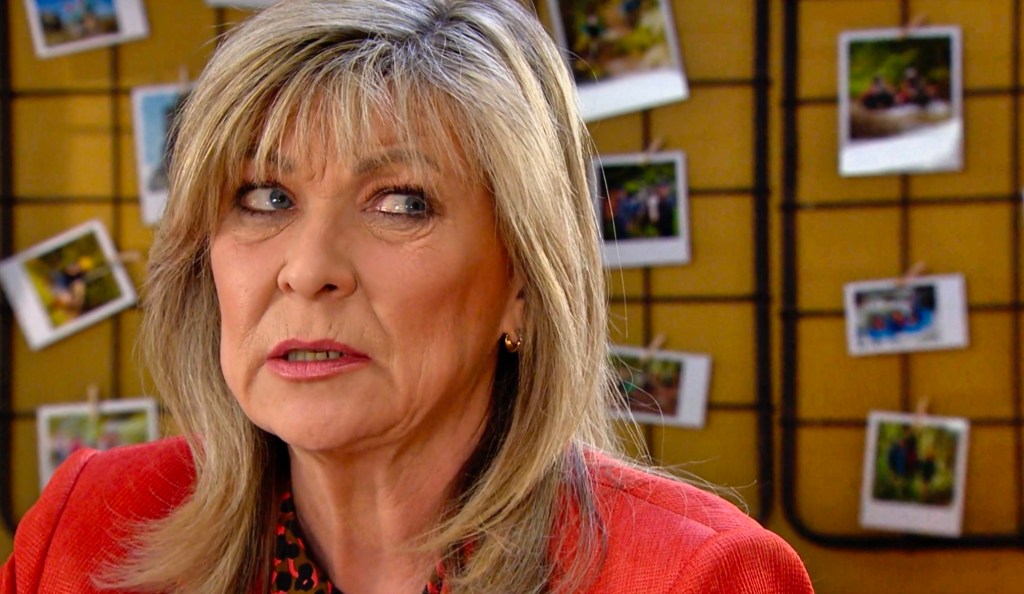 Kim opens up to Will (Picture: ITV)

‘Everything that happened from the moment he came back here, to him dying in that car accident. I nearly lost it, Will. In the end, it brought me closer to the edge than I’ve ever been.

Kim Tate (Claire King) reflects on a time when she was close ‘to the edge’ in Emmerdale next week, recalling the events leading up to Jamie’s (Alexander Lincoln) supposed demise.

Jamie, as viewers know, disappeared without a trace following a deadly car accident last year. It was thought that he died, but a subsequent twist revealed that the character was very much alive.

Kim, however, remains in the dark about her son’s fate, believing that he’s gone for good.

Next week, a row breaks out between she and Will Taylor (Dean Andrews), after she finds out that he’s been lying to her about what he’s been going through.

Kim retreats to The Hide, where she reflects on recent events, before having a heart-to-heart with her beau, as previewed in the above clip taken from Wednesday’s (May 18) offering of the ITV soap.

‘Look at what happened between me and [Jamie],’ she says. ‘Look at the heartache not being able to communicate caused to me, to you, to Belle, to Dawn, to Andrea!

‘What I went through with him, it practically destroyed me.

Kim opens up to Will (Picture: ITV)

‘Everything that happened from the moment he came back here, to him dying in that car accident. I nearly lost it, Will. In the end, it brought me closer to the edge than I’ve ever been.

Will is uneasy, knowing that Gabby Thomas (Rosie Betham) and Dawn Taylor (Olivia Bromley) believe that Jamie is alive.

Will Kim discussing her regrets stop Will from revealing what he knows?

Emmerdale airs these scenes on Wednesday May 18 at 7:30pm on ITV.

The House of Lords could be forced to move to the North, Midlands, South West, Scotland or Wales (Pictures: PA/Getty) Michael Gove has told the House of Lords ‘they should sit outside London’ while Westminster Palace is being refurbished, it has been reported. The cabinet minister said peers can’t use the Queen Elizabeth II Centre […]

My sister-in-law nearly destroyed my marriage – I told my husband he had to cut her out People who lost their virginity later in life share why they are glad they waited Tips for doing DIY home projects alone Office housework: Why women are shouldering the burden of non-promotable tasks I would love to live […]

Some 200,000 of them are believed to be children More than one million Ukrainians have been forcibly deported by Vladimir Putin’s forces and put in so-called ‘filtration’ camps, it has been reported. Three clips released on the Telegram messaging app claim to show the inside of such a camp – blasted as a ‘new page […]