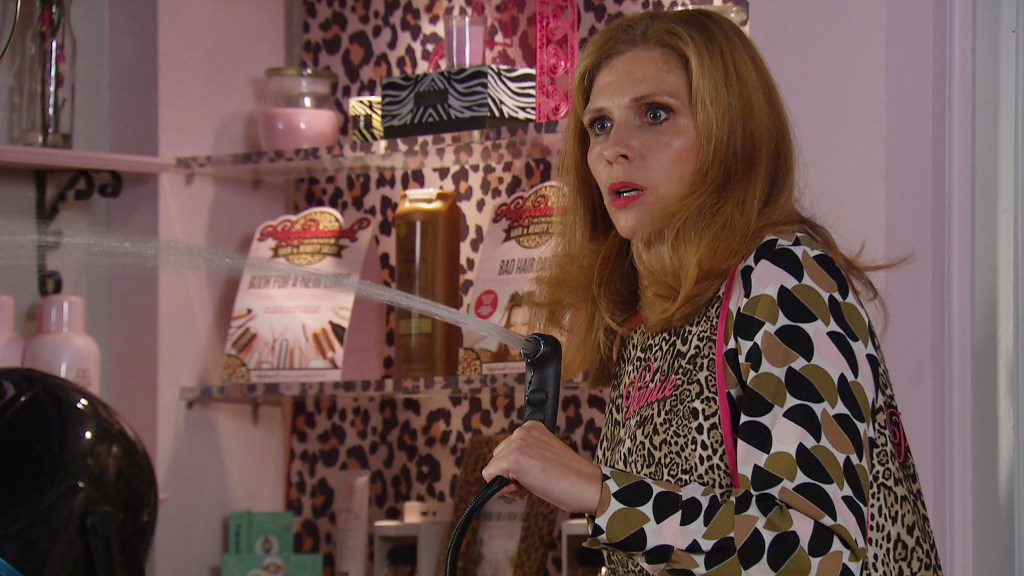 Bernice has been suffering with hot flushes (Picture: ITV)

Poor Bernice (Samantha Giles) has been suffering for weeks now with hot flushes and whatnot, but she’s finally about to get an answer in Emmerdale, and awkwardly it comes from her ex.

Bernice is feeling hot under the collar, and not just because she gets herself in a flap at work.

She’s suffering a whole host of strange symptoms that are causing havoc with her day-to-day life and when Bear (Joshua Richards) makes an insensitive joke, it does not land well.

She gives it back in kind by picking up a hose and opening the floodgates on him.

Unfortunately, her aim is as bad as her sense of humour, and she inadvertently hits Mandy’s (Lisa Riley) new client.

It’s not just with a light spray either, it’s a ‘hang her pants on the radiator’ scenario. Bernice struggles with her emotions with this and she storms out, leaving Bear and Mandy bemused.

Bernice finds Bob (Tony Aidenshaw) as a consoling shoulder to cry on as she reveals how she’s been feeling. He urges her to see her GP but his concern makes her more emotional.

Gabby (Rosie Bentham) inadvertently gives her more cause for concern by planting the idea that it could be dementia.

An equally unwelcome suggestion comes from Laurel (Charlotte Belamy), who questions whether it’s menopause. Her symptoms fit the bill, but Bernice is incredulous at such a suggestion.

She pops to visit local doc Liam (Jonny McPherson) who confirms that it’s not dementia, it is in fact menopause.

An awkward discussion to have with her ex no doubt, and definitely not a word she wants to here. Her rage bubbles up again, will she do something daft?

MORE : Emmerdale spoilers: Sam and Lydia fear they’ll have to choose between Samson and Esther

MORE : Emmerdale spoilers: Aftermath of Moira exit revealed as Cain finds out she has left

Cazorla still playing at 37 but has his eye on an Arsenal return (Picture: Getty) Arsenal great Santi Cazorla hopes to return to the club one day to work alongside ‘one of the best friends I have in football’ in Mikel Arteta. Cazorla left Arsenal in 2018 following a horrendous achilles injury that saw him […]

Sardar Azmoun is one of the star players in the Iran team (Picture: Getty Images) As protests against the ruling regime in Iran continue, some of the country’s star footballers have spoken in support of their people while they prepare to play in the World Cup in Qatar. The death of Mahsa Amini in custody […]