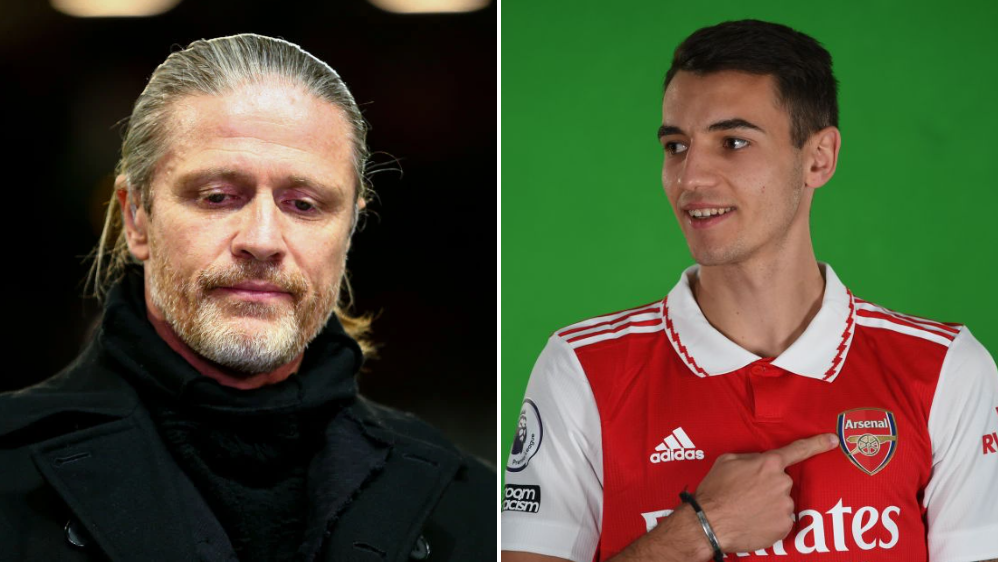 Emmanuel Petit has warned Arsenal fans not to expect an immediate impact from January signings Leandro Trossard and Jakub Kiwior.

Arsenal made Belgium international Trossard their first signing of the window last week, securing his services from Brighton in a deal worth around £27m.

Trossard, who will be at the Emirates until at least 2027, made his Gunners debut in last weekend’s 3-2 victory over Manchester United.

Arsenal’s second January signing – Poland defender Kiwior – watched on from the stands as Mikel Arteta’s side beat United to move five points clear at the top of the Premier League table.

The Gunners then spent almost £18m to sign Kiwior from Italian side Spezia, with the 22-year-old also putting pen to paper on a deal until 2027.

Petit believes Trossard and Kiwior both have potential but has warned fans that it will take a while for the January additions to get up to speed and start contributing to Arteta’s side.

‘It’s going to be a different challenge playing for Arsenal compared to Brighton,’ Petit told Sporting Post when asked about Trossard’s arrival.

‘Brighton are used to playing very good football and he was doing a great job until he was left out of the team.

‘Watching him when he came on to the pitch, it’s not easy when you come into a team mid season like this, especially a team that’s working so well.

‘It can be difficult because it’s going to take time to settle, to get into the dressing room and to understand exactly what Arteta is asking.

‘He just needs time and patience because he has qualities but he needs time to show those qualities. I had the feeling that it would be difficult for him for the first few games, it’s impossible to judge him now.’

Discussing Kiwior’s move to the Premier League leaders, Petit added: ‘He can play either midfield or defence.

‘He is energetic and has good technique and he is very aggressive on the ball. It’s difficult to get past him and he always wins the ball.

‘But I’m not sure if he can yet play as a holding midfielder in the Premier League because he’s young and still has to improve.

‘Trossard is more mature and has more experience whereas Kiwior is young and he will need time. But he is young like the rest of the team which I think is important.

‘This team is very humble, Arteta sent a big message to the dressing room with Aubameyang and why everyone needs to be right behind the manager. Why they need to support and understand the rules.

‘For me this is very important – when you are a young player coming in, you see how the rules are respected in the …read more

US to send tanks to Ukraine in major blow for Putin

Marcel Sabitzer is open to leaving Manchester United. (Photo by Roland Krivec/DeFodi Images via Getty Images) Manchester United have opened talks with Bayern Munich over the signing of midfielder Marcel Sabitzer after Christian Eriksen was ruled out for up to four months. The Dane was the victim of a horrendous tackle by Reading’s Andy Carroll […]

British Transport Police are dealing with the incident at Barons Court (Picture: Shutterstock / William Barton) London Underground services in west London ground to a halt tonight after a man got onto the roof of a station. There was no service on the District Line between Acton Town and Hyde Park Corner. Photos and videos […]