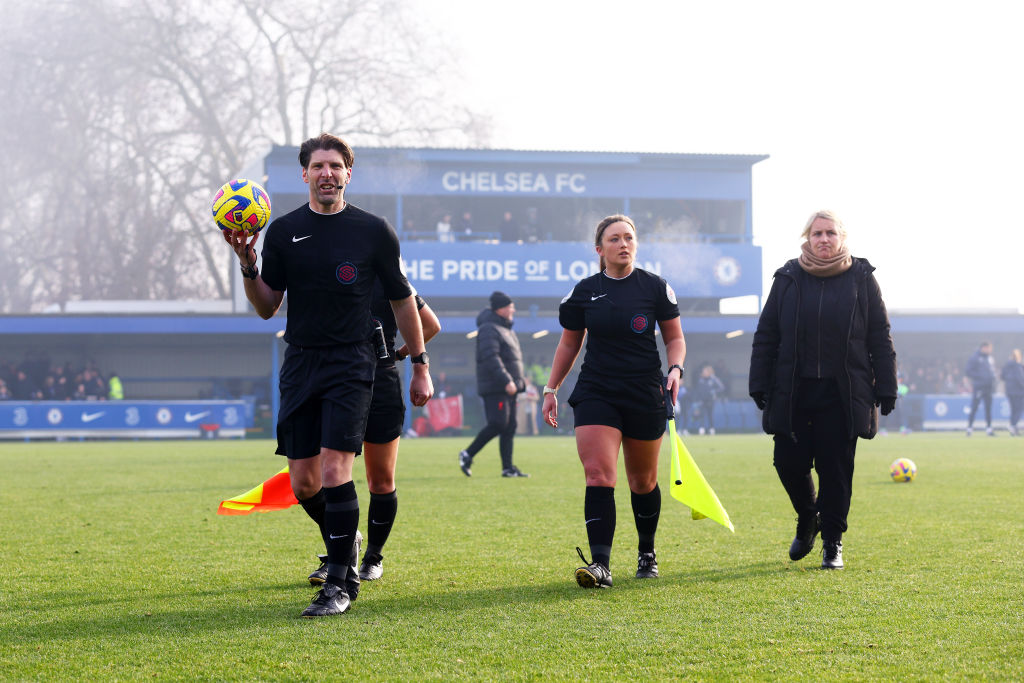 Chelsea’s Emma Hayes (right) after the match on Sunday was postponed (Picture: Getty)

Emma Hayes says Chelsea’s owners share her vision for improving infrastructure in the women’s game after a frozen pitch forced the abandonment of her team’s Women’s Super League match against Liverpool after just six minutes on Sunday.

Referee Neil Hair declared the surface at Kingsmeadow, which is not fitted with undersoil heating, playable after staff worked with heat blowers and covers to thaw the pitch.

But within minutes of kick-off it became clear the playing surface was unsafe and the game could not continue.

‘I’ve spoken with our owners about it and they share the same vision that I do around the women’s game,’ Hayes said.

‘This isn’t about them. This is about the infrastructure in and around the game. A year ago or two years ago, pitch tents and blowers were the solution. Well, clearly not.

‘But if that’s the case and we want to ensure fixtures are on week in, week out, then we’re going to have to come up with another plan.

I suspect that conversation will take place, not just as a result of the weekend, but I’m sure it’s on everybody’s agenda.

‘I’ve said for years, cancelling games has a detrimental impact on our sport.’

Riley Keough said she was ‘blessed’ to have the picture (Picture: Instagram) Riley Keough has posted a picture of the last time she saw her mother, the late Lisa Marie Presley. Presley, the only daughter of acclaimed musician Elvis Presley, died suddenly on January 12 aged 54, leading to an outpouring of grief and love from around the […]

Patrick Vieira’s Crystal Palace denied Manchester United a tenth successive win (Picture: Getty) Patrick Vieira is confident Manchester United are still capable of challenging Arsenal for the Premier League title, despite blowing the opportunity to pile the pressure on the league leaders ahead of Sunday’s heavyweight showdown. Erik ten Hag’s side looked on course to […]