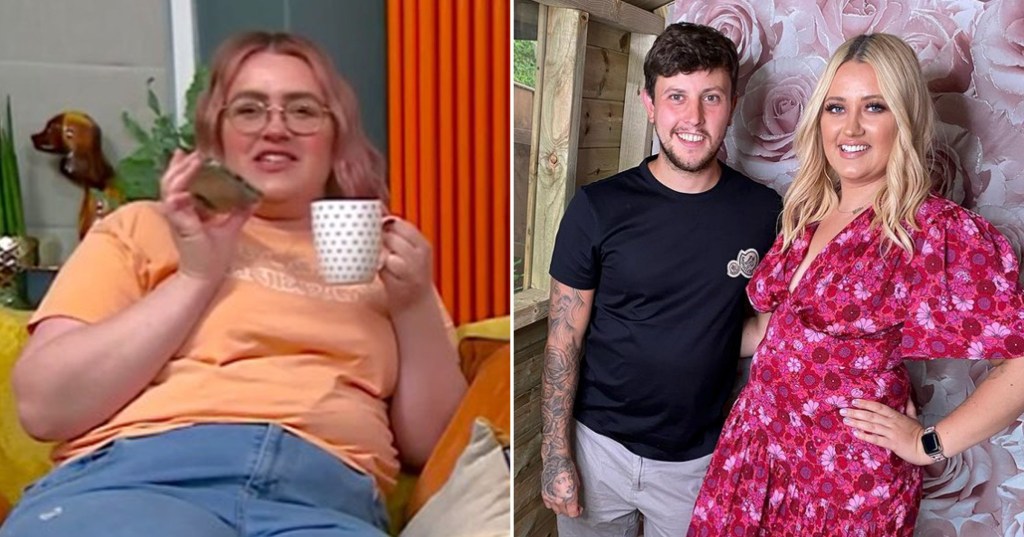 The couple discussed the meaning of a ‘shotgun wedding’ (Picture: Channel 4/Instagram/Ellie Warner)

Ellie Warner made her return to Gogglebox during tonight’s episode, having taken a break to take care of her boyfriend after he suffered a horrific accident.

Not only were fans excited to welcome her and her sister Izzi Warner back to the Channel 4 programme, but Ellie’s boyfriend Nat Eddleston could also be heard on the phone as she gave him a ring.

In March this year, Nat was involved in a life-threatening incident when he was hit by a car, sustaining a broken neck, a broken back and two collapsed lungs and being put on life support, before entering a stable condition.

On the latest episode of Gogglebox – having taken time off to look after her boyfriend – Ellie told her sister that she and Nat had a discussion about the type of wedding they wanted in future, with her boyfriend saying he wanted a ‘shotgun wedding’.

However, she didn’t think he understood what a shotgun wedding means, as it’s typically a wedding that’s been rushed because the bride is pregnant.

‘I went, “Ooh, so that means that you want me to be pregnant before we get married?” And he went, “No”,’ she told Izzi, as her sister burst out laughing.

Gogglebox fans were excited for Ellie and Izzi to return (Picture: Channel 4)

In order to get to the bottom of it, Ellie gave him a call to check if he had mistaken a shotgun wedding for something else.

‘Hello? Nat? Do you know when you said about a shotgun wedding this morning, what did you think a shotgun wedding meant?’ the hairdresser asked over the phone, as he replied on speaker: ‘Forced to get married.’

Realising that Nat did know that shotgun weddings often happen when the bride is pregnant, Ellie asked her partner: ‘So does that mean that you’re going to get me pregnant?’

‘No,’ he replied abruptly, confusing Ellie and Izzi as they hung up the phone.

Ellie and Izzy are back! #Gogglebox

i just cried seeing ellie back on #gogglebox (bless her)

Aw Ellie and Izzie are back â¤ï¸#Gogglebox

‘So happy to see Ellie and Izzi back on our screen,’ one person tweeted, as another wrote: ‘I just cried seeing Ellie back on Gogglebox (bless her).’

‘I’m glad Ellie and Izzi is back I’ve missed them,’ someone else said, as another added: ‘Oh yay! Lovely to see Ellie and Izzy back.’

Hollyoaks spoilers: Warren dumps Maxine as she is accused of lying about mystery illness?

The Queen will be marking her 70 years on the throne in style (Pictures: Andrew Matthews/WPA Pool/ James Devaney/FilmMagic/iStockphoto/Getty) Queen Elizabeth II’s Platinum Jubilee weekend – Thursday, June 2 to Sunday, June 5 – is set to be the country’s ‘biggest ever’ celebration. The occasion is expected to be bigger than the celebrations for Queen […]

Fake nun ‘frantically danced’ in monastery and ‘writhed on the altar’

The nun began dancing ‘frantically’ at the monastery (Picture:@ciananbrennan/Twitter) A fake nun obsessed with Jesus Christ has been banned from entering a monastery for four years after she ‘intimidated’ its elderly congregation. Rachel Mulcahy is now subject to the eyebrow-raising injunction after priests from the Clonard monastery in Belfast complained about her erratic behaviour. Belfast […]

The incident in Stoke-on-Trent provoked outrage (Picture: Twitter) Allegations that a van driver killed three ducklings because he ‘could not wait’ for them to cross a road are being investigated by police. The alleged incident is said to have taken place in Stoke-on-Trent on Friday, where traffic has stopped to allow a family of ducks […]