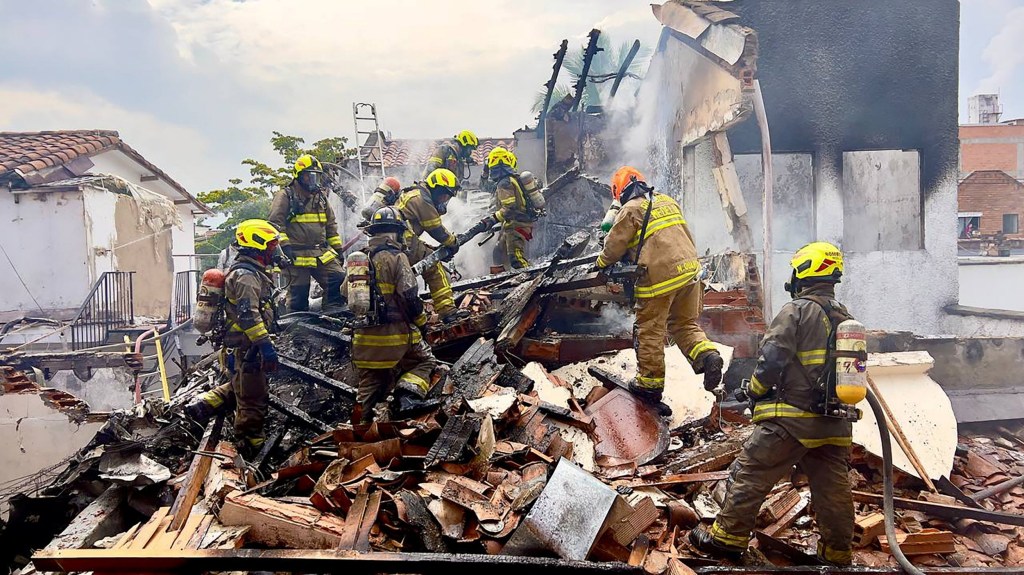 Firefighters work in the area where a small plane crashed into a house in Medellín (Picture: Reuters)

An airplane has crashed in a residential neighbourhood in Colombia after ‘an engine failure’.

Authorities confirmed at least eight people have died in the incident in the central city of Medellín, the second largest in the South American country.

Six passengers and the two pilots perished in the wreck this morning, but it wasn’t immediately clear if more people were on board.

Firefighters and emergency services rushed to the scene in the neighbourhood of Belén Rosales.

It is still unclear of any of the residents of the building were also injured.

Emergency services rushed to the area after the incident this morning (Picture: AP)

It is still unclear if any of the residents were injured (Picture: AFP)

According to aviation officials, the aircraft crashed shortly after taking off from the Olaya Herrera Airport in Medellín.

The exact cause of the crash has not yet been determined.

Mayor Daniel Quintero said in a statement the plane had experienced ‘an engine failure’ during takeoff.

‘Unfortunately, the pilot was not able to keep the plane aloft and it crashed in this neighbourhood,’ he added.

The aircraft, a twin-engine Piper PA-31, was traveling to the western department of Chocó.

Can Stormzy beat Sir Cliff Richard to the number 1 album spot? (Picture: Getty) In more news we didn’t expect to see in 2022, Stormzy is battling it out with Sir Cliff Richard in an album chart battle for number one. The beloved Croydon rapper is vying for the top spot with his third studio […]

Alvaro Morata scored just eight minutes after coming off the bench (Photo: Getty) Germany have kept their World Cup dreams alive but their destiny is out of their hands after finding a late equaliser against Spain. A thrilling game at the Al Bayt stadium ended 1-1 after Niclas Füllkrug’s strike cancelled out Alvaro Morata’s opener. […]

Dead body found in street may be covered in ‘hazardous substances’

Emergency crews were called to Kilburn Drive in Shevington at around 7pm on Thursday (Picture: MEN) A dead body found on the street in Wigan may have been covered in ‘hazardous substances’. Greater Manchester Police has urged anyone who had direct contact with it to get in touch or seek immediate medical advice. Emergency crews […]