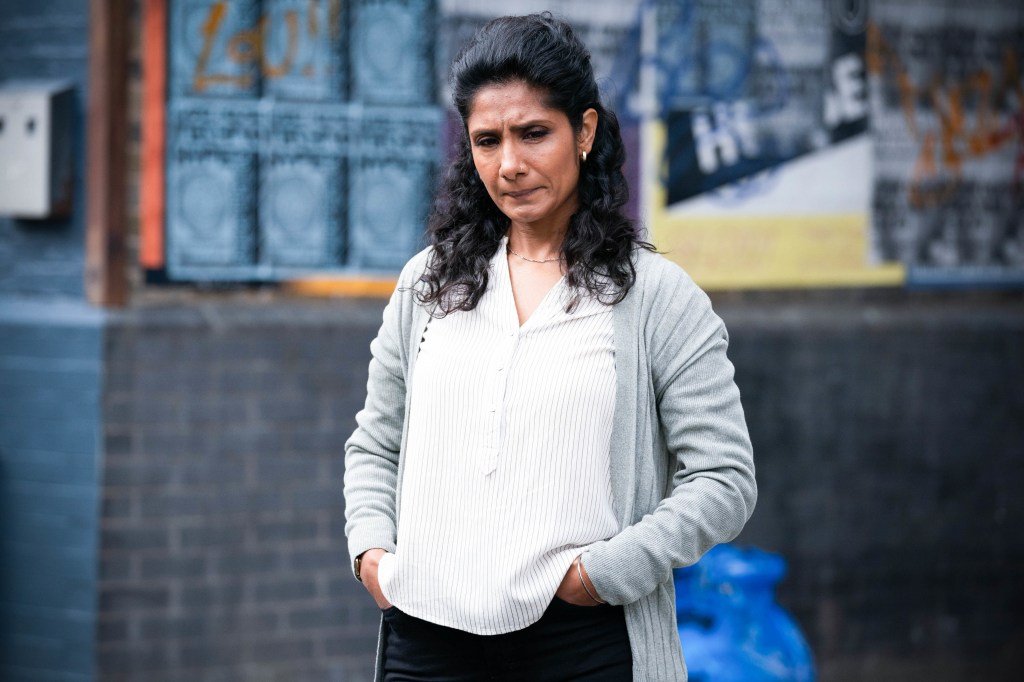 Life is getting worse for Suki (Picture: BBC)

Suki (Balvinder Sopal) found herself in a horrific situation in EastEnders when she made a deal with Ranveer (Anil Goutam). She soon discovered that his interest in her wasn’t purely businesslike when he made advances towards her to ‘close the deal.’

In upcoming episodes viewers will see Suki struggling with being in the stomach-turning position of being in debt to Ranveer when he has definite ideas about how he would like that repaid. As he continues to blackmail her, Suki tries to find a way out.

She tries to get Sharon (Letitia Dean) to lend her the money she needs to get out of the arrangement with Ranveer, but then she comes up with a plan.

She agrees to meet up with him and he wants to ‘get straight to business.’ Whether that’s actual business or funny business, Suki thinks she has the upper hand finally – but then things go wrong.

Realising what she’s up to, Ranveer is furious and refuses to leave, insisting that Suki makes it up to him in the way they agreed. Terrified, Suki realises that she’s in terrible danger and she leaves a voicemail for Kheerat (Jaz Singh Deol), begging him to help her.

At the same time, Ravi (Aaron Thiara) is looking for his father and Eve (Heather Peace) points him in the direction of where Ranveer and Suki are.

Meanwhile Suki is literally fighting for her life. Will Kheerat or Ravi get to her in time?

‘So do you still fancy dead people or…?’ When it comes to getting the inevitable sneaky ‘You up?’ text or DM slide from someone who’s ghosted you in the past, I think I can safely say this isn’t what most people expect. We’ve all been there. A date has gone — in our eyes — […]

‘It’s also likely she saw it and just wanted a friend’ (Picture: SWNS) This is Mya, a dog who’s developed an interesting new habit. The six-year-old pooch has taken to bringing turtles home to her exasperated owner, Rachel Laposka. Rachel, 19, has filmed Mya holding a poor kidnapped reptile as she urges the dog to […]