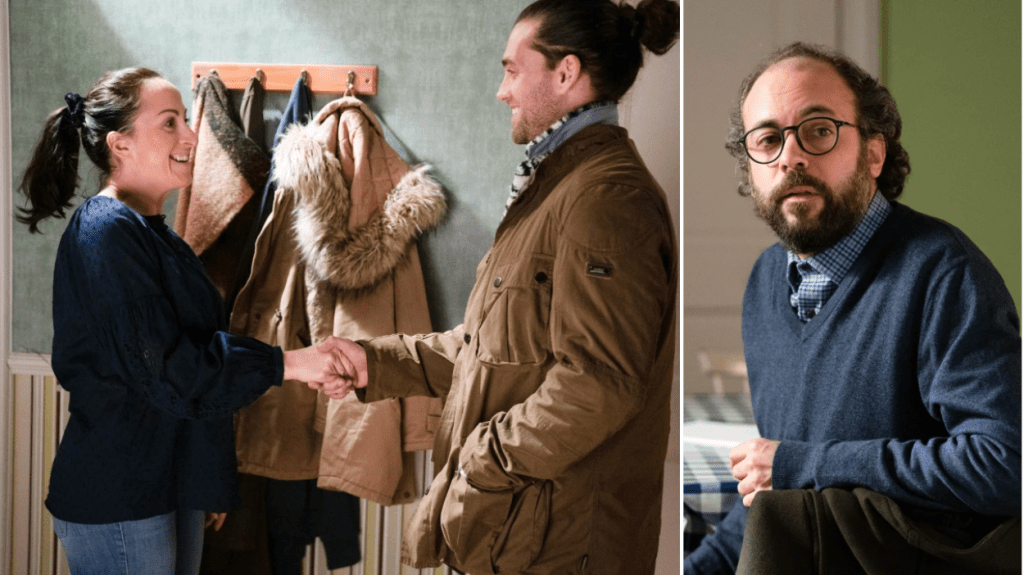 When we first met Reiss Colwell (Jonny Freeman) in EastEnders, he was established as a bit of an awkward fellow who took a liking to Sonia Fowler (Natalie Cassidy).

‘There’s a real spark immediately between Reiss and Sonia,’ the show’s boss Chris Clenshaw told us of Reiss’s introduction, while Natalie Cassidy said that Reiss was a ‘shining beacon of light’ in Sonia’s life.

Over the festive period, after Dot’s (June Brown), funeral, we didn’t really hear from Reiss a great deal.

However, as he returns to Walford to catch up with Sonia and help with some paperwork, it becomes apparent Reiss may like to hang around a bit more.

After an evening with her new pal, Sonia tells Kathy (Gillian Taylforth) about what they got up to, and she can’t help but wonder if Reiss may have wanted to be her new lodger but struggled to actually put the idea across.

As Sonia meets the potential candidates, it looks like Reiss may stand a chance as none of them really appeal to her.

However, Sonia then meets Jed – who gets her seal of approval.

This causes Reiss’ jealousy to grow somewhat. He hopes Sonia will end up evicting Jed after he slips up, but he manages to pull the situation around.

As things get difficult and Reiss fights for Sonia’s attention, will she get the hint that he may like her?

Or continued to be swayed by new face Jed?

To view this video please enable JavaScript, and consider upgrading to a web browser that supports HTML5 video A driver somehow captured the terrifying moment a house exploded in front of his car. Jonathan Kirk was driving along Marlborough Avenue in Goole, East Yorkshire, in the early hours of Sunday when a blast ripped through […]

Behati Prinsloo and Adam Levine have welcomed their third child together (Picture: Getty) Adam Levine and wife Behati Prinsloo have welcomed their third child together. The Maroon 5 frontman, 43, and Victoria’s Secret model, 34, have added to their family once again, months after confirming their baby news. An insider told People Magazine of their […]

Stacey Solomon has landed a huge new role (Picture: S Meddle/ITV/Shutterstock) Stacey Solomon is looking to crack Hollywood after landing a job with Reese Witherspoon’s production company. The Loose Women star, who delighted fans with her role on BBC’s home organisation series Sort Your Life Out, is set to front a brand new home improvement […]