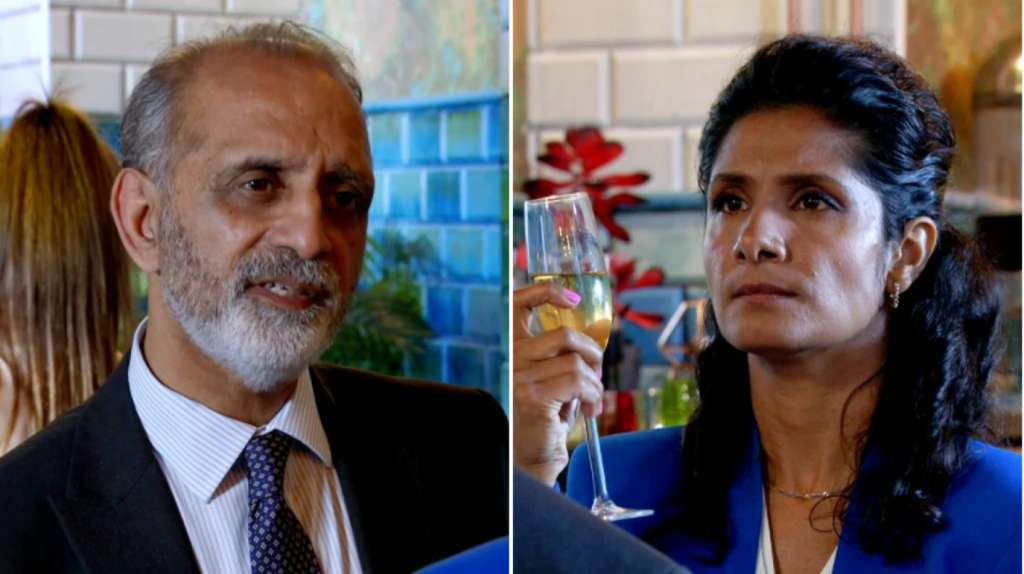 The bargain comes with a price (Pictures: BBC)

Suki Panesar (Balvinder Sopal) struck a bargain with Ranveer (Anil Goutam) in tonight’s EastEnders – but her celebrations immediately turned sour as it became clear that Ranveer expected their relationship to encompass far more than business in return.

Having earlier gone to Vinny (Shiv Jalota) for help after she realised to costs at the Minute Mart were rising beyond her control, Suki was left in desperation after her son rejected her.

This left her having to desperately pitch against her other son, Kheerat (Jaz Singh Deol), for Ranveer’s business. This tense meeting wasn’t helped when Ranveer’s son Ravi (Aaron Thiara) – newly out of prison – turned up and wasted no time in winding up Kheerat. ‘Sitting in your mum’s house, drinking your mum’s tea, trying to steal her business.’

Ranveer took up the theme. ‘Why are you pitching against your mother?’ he asked Kheerat. ‘Where’s your respect, your loyalty?’ He gave the contract to Suki, based on her excellent pitch but also on the fact that Kheerat had behaved in a disloyal fashion.

That was what he said, anyway, but later on it became clear that he was planning to use the business relationship to get closer to Suki.

As they celebrated their new collaboration at Walford East, a slimy Ranveer put his hand on Suki’s leg under the table. Horrified, Suki didn’t know what to do.

‘I need to know how important this collaboration is to you,’ he said, ‘And exactly how far you’re willing to go to seal the deal.’

His intentions now blatantly obvious, how will Suki deal with the fact that financially she needs this deal with Ranveer, but it could come at a terrible price?

The venue received an ‘unprecedented’ number of complaints from attendees (Picture: Denis Jones/REX/Shutterstock) The Pleasance Theatre has responded after comedian Jerry Sadowitz’s show was pulled from Edinburgh Fringe. Initial reports stated that his set was banned due to racist and homophobic content, with organisers receiving a wealth of complaints about his jokes. The venue has […]

Are London Tubes running amid train strikes this week?

Is the London Underground going to be running? (Picture: Getty) More national rail strikes are on their way, after strikes in June and July caused chaos for commuters. Train strikes are happening on Saturday, August 13, as well as Thursday, August 18 and Saturday, August 20. Transport for London (TfL) staff are taking industrial action, […]