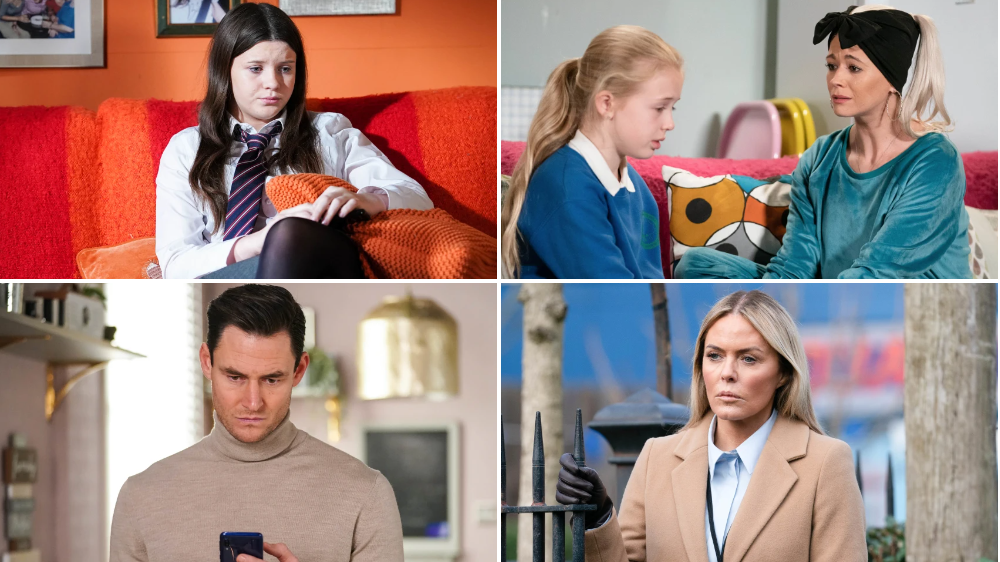 There is pain for the children of Walford (Picture: BBC)

Next week’s EastEnders sees further agony for the youngsters of Walford, as the life of young Lexi is ripped apart by the upsetting news that her mum Lola (Danielle Harold) is dying.

When Lola makes the difficult move of explaining what is happening to her daughter, Lexi’s response is a surprising one.

With Emma (Patsy Kensit) also looming on the periphary of the situation, Lola has a lot to deal with.

The same can be said for pregnant child Lily Slater (Lillia Turner). In the wake of her decision to keep her baby, Jack Branning (Scott Maslen) lashes out, determined to persuade her to have an abortion.

His aggressive actions earn him the wrath of Stacey (Lacey Turner), and battle lines are drawn.

Here’s what you can expect next week.

All hell breaks loose at the Branning house when Jack discovers Ricky Jr. has offered to support Lily in bringing up their baby. Although Denise pleads caution, Jack demands a meeting with Stacey and Martin.

When the families come together, Jack insists they need to talk some sense into Lily, but Stacey stands her ground and says abortion is off the table.

Later, in McKlunky’s, Jack runs into Lily and tells her what her life will be like as a teen mum. When Stacey hears, she storms over to No.27 and bans the whole Branning family from having anything to do with the baby.

Ricky Jr. is devastated and calls Sam as Denise warns Jack he’s out of order. Later, Jack is devastated when Ricky Jr. leaves to move in with his mum.

Lola is concerned when Lexi feigns illness to stay off school. Ben takes her in but receives a call to pick her up shortly afterwards. It transpires that Lexi wants to be with Lola 24/7 until she’s better. She decides it’s time to be honest and tell Lexi that she’s dying…

Reiss tries to help Sonia with her money problems by suggesting she gets a lodger. Felix pitches a money-spinning idea for a drag queen night styled by Whitney’s stall to Kathy. Zack is reminded of his financial obligations to Whit and their baby.

Emma reaches out to Lexi – can she be trusted? (Picture: BBC)

Lola braces herself to tell Lexi that she’s dying. The news hits Lexi like a ton of bricks, but instead of crying, she demands to go back to school, furious that Lola lied to her.

After school, Lola’s mum Emma approaches Lexi in the playground. After some comforting words to her oblivious granddaughter, Emma heads to Fox & Hair, where she books an appointment for tomorrow and asks for Lola, specifically.

Ricky Jr. is getting away with murder …read more

Officers were called after reports of a gunman firing shots at a car (Picture: Eddie Mitchell) Police have arrested a man in connection with an armed incident in Hastings. Sussex Police received multiple reports of shots being fired towards a vehicle in Theaklen Drive around 7pm last night and of a man in possession of […]

Tilly Ramsay shocked judges and contestants with her family secrets (Picture: Getty Images) Gordon Ramsay’s daughter Tilly Ramsay joined him for the opening of Next Level Chef and she spilled some family secrets that left contestants shocked.  Taking on the theme of family favourites during the fourth episode of ITV’s cooking show, budding cooks were […]

Kylie Jenner celebrates daughter Stormi’s 5th birthday with heartfelt post: ‘I will miss this little face as it keeps changing’

Kylie Jenner marked daughter Stormi’s 5th birthday on Instagram (Picture: Instagram) Kylie Jenner shared a heartfelt post to mark daughter Stormi’s birthday as her eldest child turned five years old. The beauty mogul posted a string of photos of herself and the little one, who she shares with Travis Scott, to celebrate the day, including […]