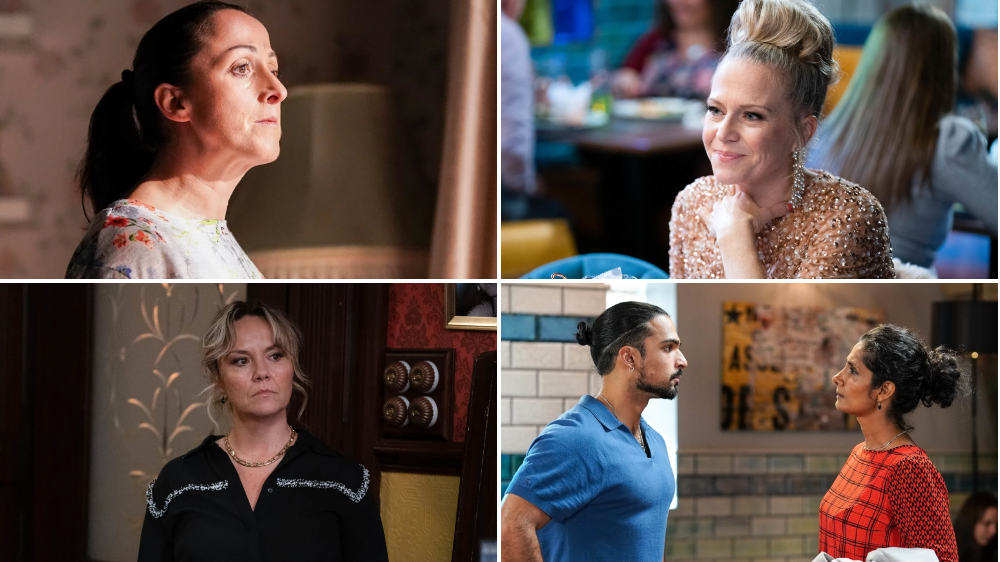 An Icon dies this week in EastEnders (Picture: BBC)

Life is about to change forever in EastEnders, as everyone’s beloved friend and neighbour Dot Cotton dies.

Sonia Fowler (Natalie Cassidy) is given the heartbreaking news, and it’s a tragedy that will have far-reaching consequences across the community.

With Mick (Danny Dyer) spending more time with his ex-wife, Janine starts to spiral, and soon is delivering bad news.

Your full rundown of next week’s episodes is below…

Linda worried about the consequences of missing her probation (Picture: BBC)

With Linda worried about the consequences of missing her probation appointment, Sharon begs Mick to step-in and explain to Murray where she was. Sonia prepares for a job interview.

Janine is upset to learn Mick has once again been with Linda and drops some upsetting news on him.

Mick tells Sonia who realises Janine is lying and after confronting her, goes to tell Mick. Janine manages to stop her but Shirley overhears and is suspicious.  Janine later assures Sonia she’ll tell Mick eventually, but Mick overhears – how much has he heard?

With Rocky getting desperate, Bobby does some digging into Sophia and discovers Harvey has sent her money.

Freddie has a plan to help and manages to get hold of Harvey’s phone, screenshotting as much information as he can. Freddie and Bobby later tell Mitch and Rocky their plan but Freddie makes an interesting discovery.

Alfie panics when Kat returns and needs to access Phil’s safe, forcing him to admit he lost £30,000 of Phil’s money.

Kat piles the pressure on to get it back and Alfie gets his hands on some old electric items to sell, however his plan backfires Kat is annoyed to learn Alfie has been living at no.55 in her absence but after some convincing from the boys, she lets Alfie stay.

Stacey question Eve’s motives with Nish and Eve manages to secure a lunch date with him and Suki. Suki is less than happy but Eve tells Suki she’s going nowhere.

Janine panics as Mick questions what she’s keeping from him. Linda thanks Mick for his support with Murray and they share a touching moment. Sharon reveals the date who stood Linda up, Karl, was actually a miscommunication and he’d like to see her.

Mick rallies Linda on but Janine interrupts. Shirley sees straight through Janine and alone, calls her out for her lies.

Rocky wonders if they should tell Harvey what they’ve discovered but when Dotty barges in and learns what’s happened, he realises they have to.

What is ITVX? Launch date, TV shows, and find out if it’s free

ITVX will replace ITV Hub (Picture: ITV) ITV’s new streaming platform, ITVX is set to launch next month, just in time for Christmas telly. The service will replace ITV Hub and will stream exclusive shows, six months before they are released on ITV channels. Ahead of the launch, ITV’s channels have been given a fresh […]

The iPhones were seized at carrier stores and authorized Apple resellers (Picture: Photo/Richard Drew, File) Brazil’s consumer protection regulator has seized iPhones from retail stores for not including chargers in the box. Hundreds of iPhones from different retail stores were seized in the capital, Brasília under ‘Operation Discharge’ as reported by Tecnoblog. According to the report, […]