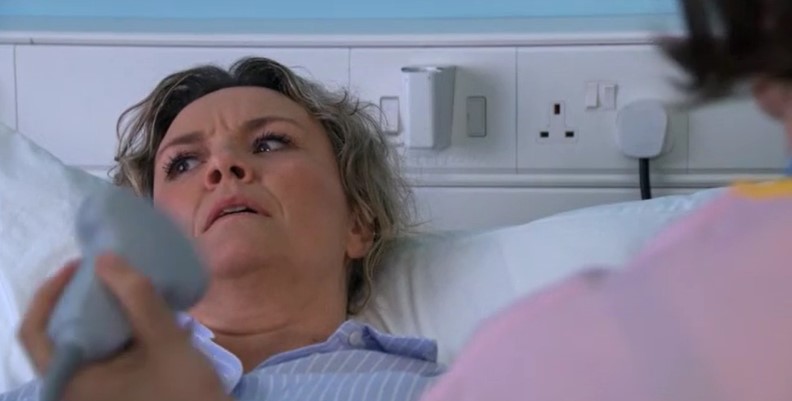 Janine’s dreams of a family with Mick may be snatched away (Picture: BBC)

Janine was on Cloud 9 as she lovingly attended her appointment at the hospital with Mick Carter (Danny Dyer).

After awkwardly getting out of the way the fact they have six kids between them already (‘you have been busy!’ piped up the nurse), they fixed each other with adoring gazes as their healthy baby appeared on the screen.

Infatuated Janine oozed happiness as Mick held her face in his hands, with them looking forward to a bright future.

Janine’s joy never stops her from twisting the knife a bit where Linda (Kellie bright) is concerned, though.

She flounced back to the Vic and wasted no time in boasting to Linda that she had been for the scan.

Even when Linda made herself scarce, Janine followed her and thrust the scan photo in her face, gushing about the whole new family along with Scarlett and Ollie.

Linda had to get some air and it was job done for Janine.

In such a good mood, she decided to take herself wedding dress shopping, but things turned ugly when she stumbled on the steps at the tube station and hit her stomach.

As she doubled over in agony, she tumbled down the steps and curled up in a heap at the bottom, clearly in pain.

In coming episodes, it will actually be Linda who ends up by her love rival’s side as she is rushed to hospital.

But is Janine set to be hit with tragic news? Will she and Mick lose the baby?

Discussing Janine’s thoughts around being pregnant, Charlie recently told us: ‘Janine’s not the most maternal of people. I respected the honesty Janine had about whether this was right for her instead of just going, “I’m going to keep the baby, and that will help me keep my man” and there was real concern about her ability to be a mother as well.

Peter gave fans a hairy surprise in his latest social media update (Picture: Getty Images Europe) Peter Andre showed off a new long hairdo on social media ahead of his upcoming role in short film, Last Respects. The Mysterious Girl singer snapped a picture with his fellow castmates while on set of the production – […]

The 72-year-old was sent to Bali to stand in for his boss Vladimir Putin (Picture: AP) Russia’s foreign minister has been hospitalised with health problems after arriving in Bali for the G20 summit, local officials say. Sergey Lavrov, who was due to stand in for Vladimir Putin at the diplomatic summit, was taken into care […]