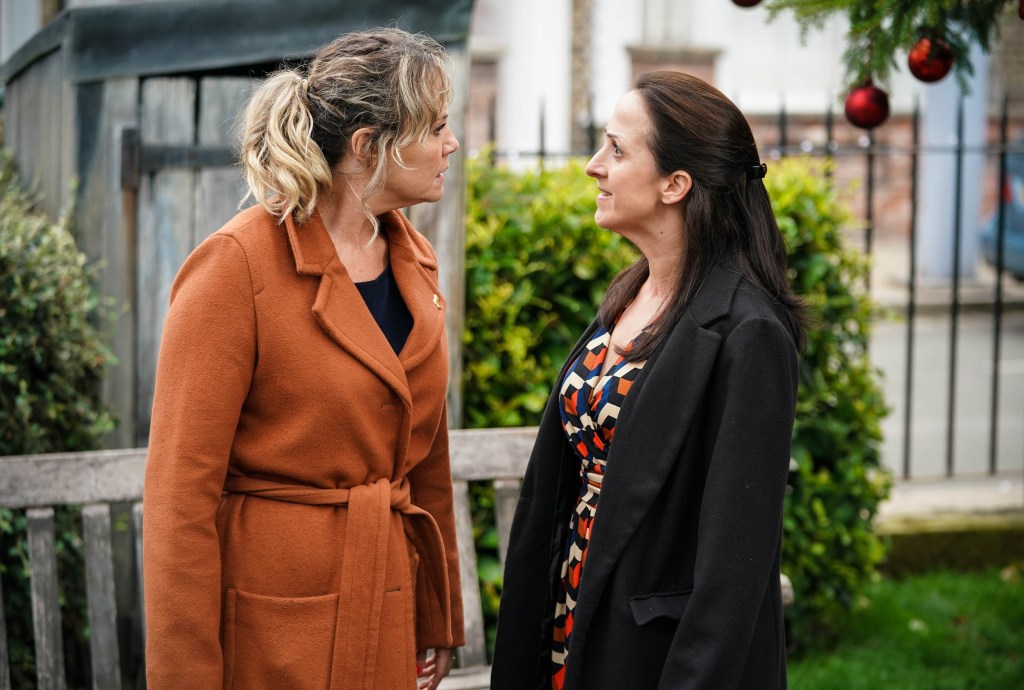 If anyone can get through to Janine, it’s Sonia. Maybe. (Picture: BBC)

And she has a lot to say about a baby lie she is about to desperately tell husband-to-be Mick Carter (Danny Dyer).

Janine and Mick recently had a scare when Janine took a fall and they nearly lost their baby.

Things are needing to be monitored now, but both have been relieved that things seem to be okay.

However, Janine’s paranoia that Mick is going to leave her for Linda (Kellie Bright) continues to overwhelm her.

And it will lead to her deceiving Mick in a serious way, when Janine distracts him with some upsetting news regarding the pregnancy.

It turns out to be quite a vicious lie, something that an astounded Sonia clocks right away.

In this intense moment, a disgusted Sonia calls Janine out, telling her that she has to tell Mick the truth.

Janine is prepared to use her baby to control the situation with Mick (Picture: BBC)

Janine begs her not to say anything and, against her better judgement, Sonia decides not to.

But Janine isn’t out of the woods – Shirley (Linda Henry) overhears some of the back and forth and while she misses the detail, she has discovered that Janine is hiding something.

Deeply suspicious, will Shirley outright confront Janine, or go straight to Mick with her fears?

Or perhaps she plans to keep an eye on her scheming daughter-in-law to be so she can gather more evidence.

Charlie, who plays Janine, recently discussed Janine’s desperation to get Mick down the aisle – and insisted the love is genuine, albeit pretty twisted.

‘Janine’s on top of the world,’ she declared. ‘She’s got her man, she’s in the Vic, she’s got her family.

‘It’s everything she’s ever wanted. But as you know, with Janine, drama is never far away, even when there isn’t any, she is one to create drama. But I think she feels very loved and that this is real.

EastEnders spoilers: Harvey loses everything as ‘Sophia’ cons him in vile plot?

‘She wants the white dress and that ring on her finger, and I think the more uncertain she feels and unnerved around Linda and Mick continuing to remain close, the quicker she wants the wedding to happen to get her man.’

On Janine’s feelings for Mick as a whole, she added: ‘I think she sees a lot of her dad in Mick, and for that reason, she is in love with him.

‘I think he makes her feel a way that nobody has made her feel before. I think …read more

Holly Willoughby turned heads in a black gown that hit the red carpet floor (Picture: PA) This Morning star Holly Willoughby wowed in black on the Variety Club Showbusiness Awards at the London Hilton on Monday with her dapper-looking husband in tow. Complimenting each other in traditional black tie, the presenter wore a simple figure […]

Roma boss Jose Mourinho insists he wasn’t surprised by Japan’s win against Germany because European teams often focus too much on ‘individuals’. Following Saudi Arabia’s astonishing win against Argentina, Japan kept up the shocks with a 2-1 win against Germany. The Japanese came from behind in the second half to inflict a shock defeat on […]