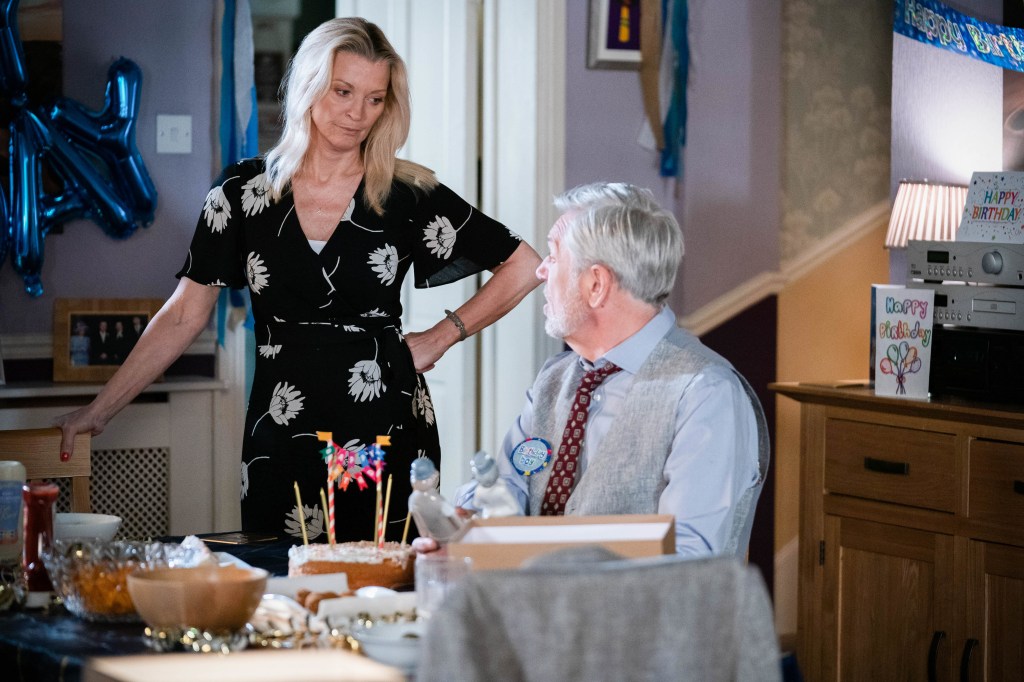 Now, now Rocky, what have you been up to? (Picture: BBC)

There was a huge surprise in EastEnders yesterday when Rocky (Brian Conley) proposed to Kathy (Gillian Taylforth) – but it was difficult to work out which of the two was more surprised.

So in tonight’s episode, while Kathy was all excited about the news, Rocky seemed to be having a few reservations.

The happy couple went to visit Harvey (Ross Boatman) to ask him to be Rocky’s best man, and Rocky seemed to have something on his mind apart from where they’d have the stag do.

Unfortunately Harvey was busy, so later on Rocky had a quiet word with Mitch (Roger Griffiths) in the Vic.

He asked him – ‘hypothetically’ – that if a man was married to a woman 25 years ago but he hasn’t seen his wife for 25 years, ‘Does that mean the marriage is… expired?’

Mitch responded that marriage wasn’t like a tax disc and didn’t just run out, but then thought Rocky was just having a laugh with him.

Mitch had to explain how marriage works to Rocky (Picture: BBC)

Rocky grinned and agreed he had just been messing around – but when he glanced over at Kathy toasting her engagement, his face definitely assumed an ‘Oh heck, what have I done?’ expression.

Brian Conley has been dropping strong hints recently that there’s a lot about Rocky’s past that we still don’t know.

‘He’s still Nick Cotton’s half-brother,’ he told us. ‘I can only hope that he’s not as evil as Nick, but I think there are some skeletons in the closet, and we don’t really know about them yet. What has Rocky really done for the last thirty years? I’m intrigued! I think there are plans to find out.’

Could this include a mystery wife he’s been keeping quiet about? While Brian says he’d enjoy exploring a darker side to his character, he really enjoys his working relationship with Gillian Taylforth.

EastEnders spoilers: Sonia contacts Ricky to save Janine ahead of Christmas tragedy?

Janine and Mick learn devastating news about their baby in EastEnders

‘On-screen, we’ve shouted at each other, we’ve danced, we’ve cried in each other’s arms and even met royalty!’ he says. ‘You get really close to someone when you spend hours freezing at a graveside, standing outside The Vic or waiting between scenes.’

Would their close relationship survive the arrival of Rocky’s wife to Albert Square? Or could Rocky call the engagement off – or even consider bigamy?

It sounds like there’s heartbreak on the horizon for poor Kathy whichever path he chooses.

Unless he was actually joking, of course.

MORE : Bonnie Langford and Davood Ghadami reunited as they return to EastEnders

MORE : EastEnders star Brian Conley reveals why he wanted ‘full on’ romance and bed scenes for Rocky and Kim

The 74-year-old was hours away from taking to the stage (Picture: REX) Aerosmith were forced to cancel a show, hours before taking to the stage, after Steven Tyler fell ill. The band were set to perform in Vegas on Friday, performing their hits to a packed crowd at the Dolby Live. Sadly, fans had their […]

I’m A Celebrity’s Owen Warner speechless after Chris Moyles’ pranks come to light: ‘Why didn’t you tell me?’

Ali Harris only walks her dogs once a week to avoid tractors (Picture: PA Real Life) When Ali Harris thinks she’s seen a tractor, her pulse races and her hands shake, fearing that if one comes too close, it will run her over. The 55-year-old, who lives in the Cotswolds, has been known to do […]