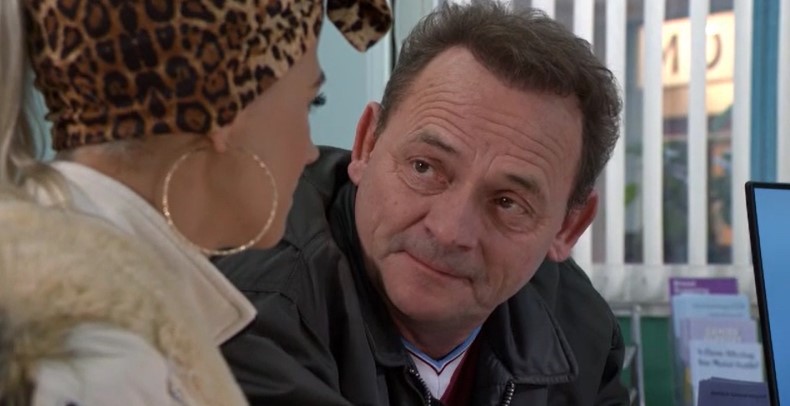 Billy is a rock for Lola, but crumbling inside (Picture: BBC)

There were emotional scenes in tonight’s EastEnders, as an emotional Billy Mitchell (Perry Fenwick) was beside Lola Pearce’s (Danielle Harold) side when she attended her first radiotherapy appointment.

Since Lola received the devastating prognosis that she may have less than a year to live, those who love her have been struggling to juggle their strength for her and their inner torment.

Billy opted to take Lola to the hospital, but it was clear that the very thought of it as leaving him terrified.

On the market, Billy found himself a corner and started to crumble, devastated at the thought of losing Lola, and feeling powerless over how to help her.

Freddie Slater (Bobby Brazier) was on hand to give him a pep talk, and Billy mustered his strength, and Lola was grateful to have him by her side.

While she puts up a brave front, it was clear that Lola was understandably very scared ahead of the treatment.

Lola is putting up a strong front, but deep down she is understandably scared (Picture: BBC)

The doctor reassured her over how long it would take and also over her fears of hair loss.

While he was out of the room, Lola told herself – and Billy – that this would be okay.

But as she headed along the corridor, Billy started to cry when he was alone. And so did we.

Back home, Lola said that it hadn’t been so bad, but was insistent in not telling Lexi what is going on, even though she is picking up the signs.

But with Lola keeping her spirits up where possible, Billy struggled to mask his unease and fear that he only has a limited time with the young woman he holds so close to his heart.

Danielle recently told us that she is pleased to play out Lola’s true personality through the story.

She explained: ‘It’s really nice because your character is your character, and for her to keep her strength, resilience and feistiness in this storyline was so important to me.

‘I’m really glad that EastEnders have written it this way and kept Lola really strong because that’s who she is.’

I write services and conduct weddings, funerals and baby naming ceremonies, as well as vow renewals and memorials (Picture: Hayley Cartwight) When I was asked to write about how my role in Coronation Street inspired me to become a real life celebrant, I hadn’t a clue how to start so, as Julie Andrews sang, ‘let’s […]

Why is it called Black Friday?

Where did the major annual sale get its name? (Picture: Getty) The day following US Thanksgiving – commonly referred to as Black Friday – has become one of the busiest shopping days of the year worldwide, not just in the States. The annual shopping bonanza sees many retailers temporarily slash the prices of their products, just […]