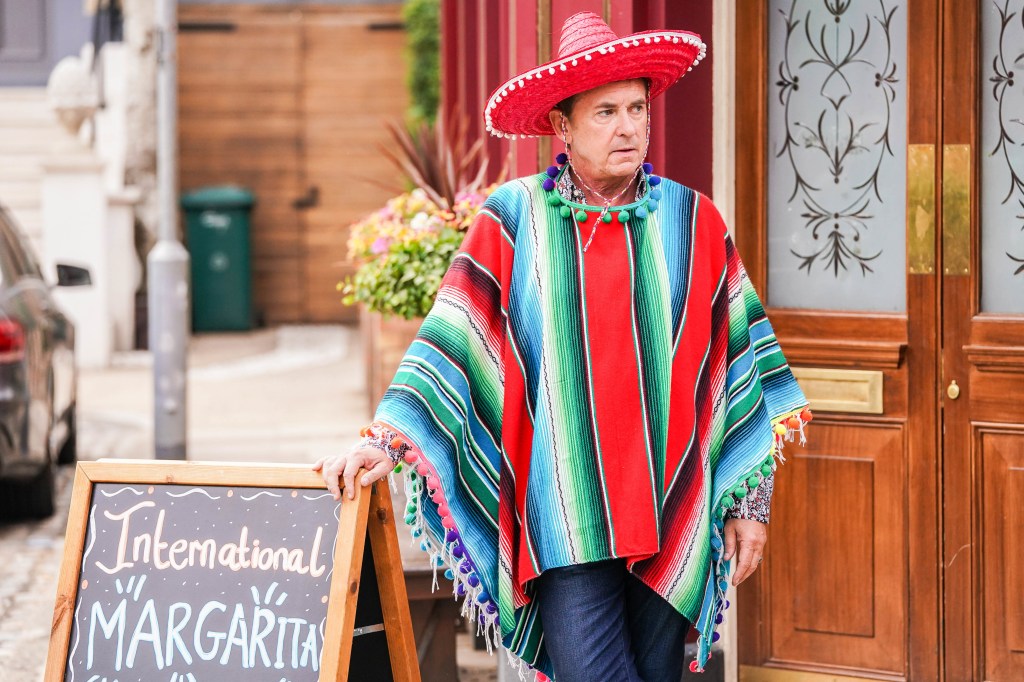 Not a happy face! (Picture: BBC)

This is the very Alfie Moon moment which sees Shane Richie’s EastEnders character done a Mexican style outfit to try and drum up business for the Vic.

His plan is to have an International Margarita Day to pull in the punters, but before long, it seems like it all may be falling flat for him.

He is in direct competition with Peggy’s, as Jay’s (Jamie Borthwick) mates are planning a surprise birthday bash for him.

Alfie’s energetic campaign to tempt cocktail fans takes a hit when Billy (Perry Fenwick) tells him about the plans for Jay.

Alfie’s face says it all – it seems his efforts are for nothing. Or are they?

Jay is a popular guy and we know where we would rather be partying, but does Alfie have a plan up his sleeve?

Will he try every trick in the book to tempt guests away from Jay’s day, effectively sabotaging it?

Or will he accept defeat?

Shane recently told Metro.co.uk that, upon returning, he is more than happy to play the comedy side to the show while others take on the more hard-hitting storylines.

‘The drama only works on a show like this when you get the light and the shade,’ he explained.

‘I’m happy to come in and bring the lightness. We can get Alfie getting up to his old tricks and his scams.

‘Is he going to get back with Kat? I can’t tell you, keep watching!

‘And if you get that right then the drama is so much more dramatic.’

Where are the current Royal residences around the UK?

There are over 30 royal residences around the country (Picture: Getty Images) With King Charles III having become monarch following the death of Queen Elizabeth II, aged 96, there has been speculation about where he and Queen Consort Camilla will live. Traditionally, the ruling monarch lives in Buckingham Palace, with residences at Windsor Castle and Balmoral (among others) […]

Granit Xhaka captained Arsenal to victory over Brentford (Photo: Getty) Granit Xhaka has thanked Arsenal supporters for a ‘very special day’ after he captained the Gunners to a 3-0 win against Brentford on Sunday. Goals from William Saliba, Gabriel Jesus and Fabio Vieira at the Gtech Community Stadium sent Arsenal back to the top of […]

Get ready to say goodbye to your Fitbit account

Fitbit was acquired by Google and the two companies are slowly merging (Credit: Getty) If you’ve been using a Fitbit to keep tabs on your health and activity goals in recent years, there’s a big change coming your way. Since the company was acquired by Google in January 2021, the tech giant has been looking […]