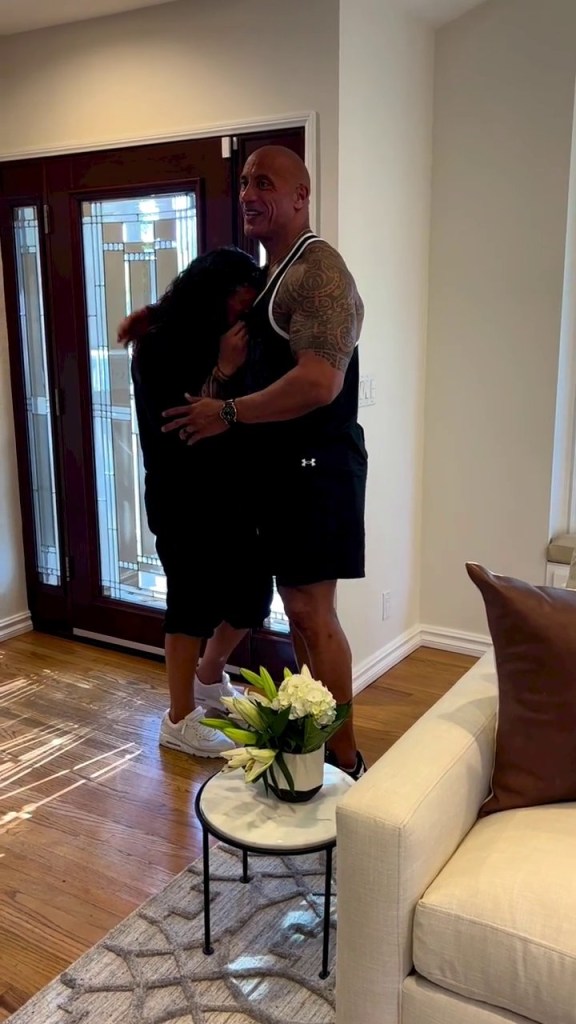 Dwayne ‘The Rock’ Johnson is all about the family – and he’s proven it once again.

The wrestler turned Hollywood megastar has bought his cousin Sarona Snuka – better known to WWE fans as former Women’s Tag Team Champion Tamina – a new home, and she couldn’t hide her emotions as she walked through the door.

‘We love you so much, cuz, we’re so proud of you! Welcome to your new home,’ he said as he guided her over the threshold with his hand covering her eyes.

‘Holy crap! I can’t,’ she sobbed, overwhelmed by the gesture as she took in her new surroundings.

In a post on Instagram, Dwayne wrote: ‘Hard to explain these emotions for all of us as I led @saronasnukawwe thru her new door. This one felt good. Surprise cuz — enjoy your new home!!’

The Rock revealed how he’s known Tamina since they were ‘little kids growing up together’, and he praised her for overcoming a lot in her life.

He continued: ‘Man this girl’s gone thru some tough times, but regardless of what life’s thrown her way – she was ALWAYS determined to break the cycle and become a strong and inspiring single mom example to her two greatest inspirations — her daughters, Milaneta & Maleata.’

He also pointed to the way she has worked to succeed in the wrestling business, becoming a WWE mainstay and someone seen as a ‘mum’ to her peers behind the scenes.

‘It’s so damn hard to make it as a pro wrestler. And it’s even way harder to make it if you’re a woman,’ he wrote.

‘Sarona (like many amazing women in pro wrestling) made her mind up long ago that she was gonna walk the walk and earn her respect in pro wrestling and make sure that the hard times she’s experienced were always her REASON to WORK HARDER and never let it become the EXCUSE to GIVE UP.

‘And that’s what she did. And that’s why my heart’s proud. Love you cuz and we always got your back.’

Dwayne buying his family a house is nothing new, and earlier this month he revealed he’d bought his mum Ata Johnson her ‘dream’ home, complete with a room filled with WWE and Hollywood memorabilia.

In a series of emotional clips on Instagram, all round good guy Dwayne showed his mum tearing up over the amazing property as he revealed how much it means to both of them.

Vitinha has emerged as a target for Manchester United and Arsenal (Picture: Getty) Porto president Pinto de Costa says the club have rejected an offer for Arsenal and Manchester United target Vitinha. The Portuguese star has attracted interest from the likes of Real Madrid and United after a breakout year in the Primeira Liga where he […]

Emmerdale spoilers: Leyla and Liam have an almighty clash over having a baby

Liam still has no idea Leyla has a drug habit (Pictures: ITV) Leyla (Roxy Shahidi)’s behaviour becomes more and more erratic in upcoming episodes of Emmerdale, as she becomes ever more dependent on cocaine. After Suzy (Martelle Edinborough) decided she was no longer going to get involved in drug-taking, Leyla was forced to look elsewhere […]