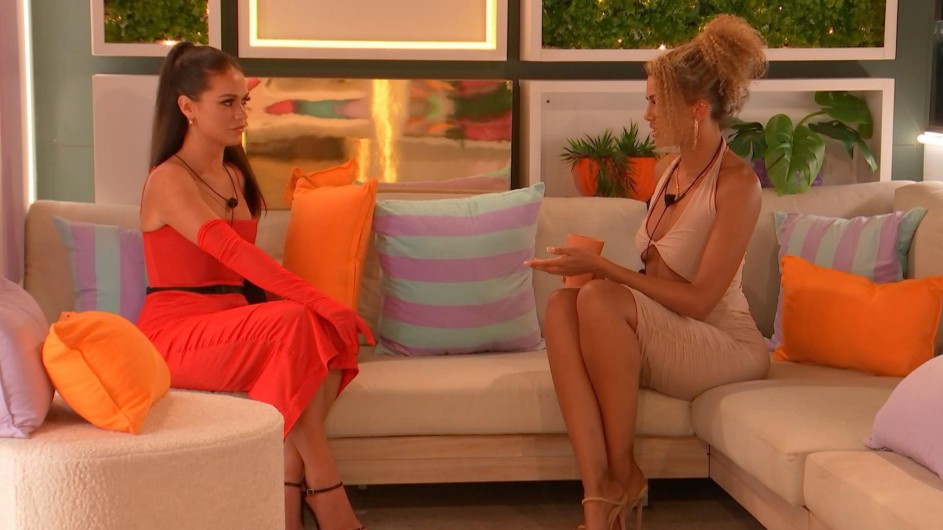 Olivia was left in tears after the drama (Picture: ITV/Shutterstock)

David was the first islander to be dumped from the villa (Picture: ITV/Shutterstock)

Explaining what went on in the villa, David said: ‘It all started really with a beer pong game, I think Zara called Liv ‘two-faced’, obviously at the time, Liv was coupled up with Tom and Zara was wanting to get to know Tom so that also got under Liv’s skin, and also in the beer-pong game, Zara kissed Tom.

‘So a combination of the three just sent Liv a bit south and ever since then there’s been tension between the two’.

The 24-year-old teased: ‘Obviously they’ve squashed it now, but if this triangle between Tom, Liv and Zara continues then yeah, it’s only going to result in more drama’.

He elsewhere echoed: ‘Look they’ve squashed the beef now but personally I think there’s going to be more to come’.

MORE : Venus in Pisces urges you to be wise in love – your star sign’s tarot horoscope

‘Total eclipse of the Pheart’: People have a lot of opinions about this baby’s name

Choices! (Picture: Getty Images) In what’s turning out to be quite the time for unique baby names to shine, an… interesting parenting choice has been shared on Reddit. On the page r/NameNerdCirclejerk, a user shared a photo of a baby with their face blacked out for anonymity’s sake that seemed to be an announcement of […]

Owen Farrell ‘learns a lesson’ from suspension for dangerous challenge

Steve Borthwick and Owen Farrell with the Six Nations trophy (Picture: John Walton/PA Wire) Owen Farrell insists he has learned his lesson after a difficult Six Nations build-up disrupted by the spotlight on his tackling technique. Farrell will be available for the February 4 opener against Scotland after a three-match ban for a dangerous challenge […]

I’ve played in places I never would’ve even dreamed of (Picture: Rachel Starritt) In a gymnasium. At the top of a rock climbing wall. Even in the middle of a race track with a car doing burn-outs around me. Those are all the places I’ve played piano – and that’s just in one music video. […]