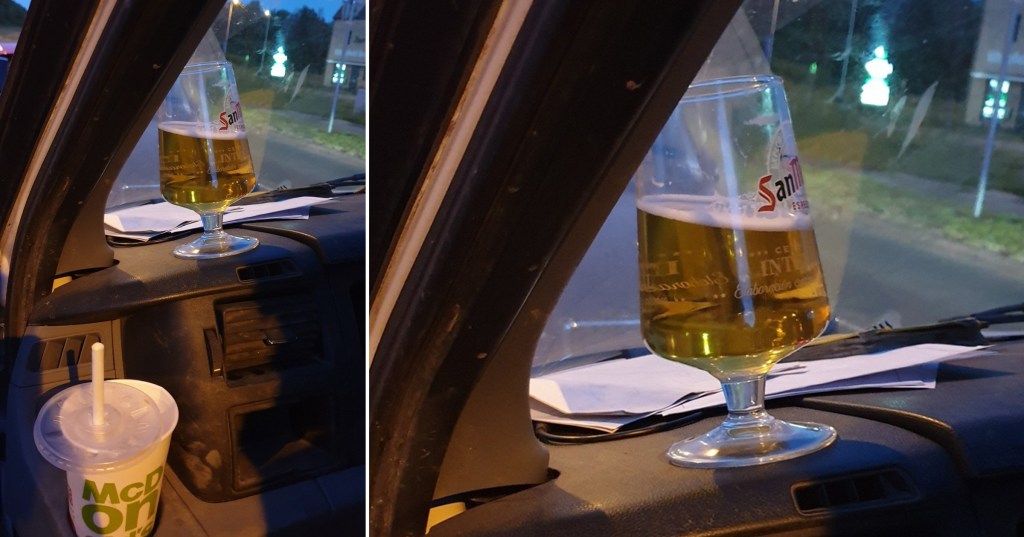 The pint was precariously perched on the dashboard (Picture: Liverpool Echo)

A driver was pulled over after police spotted a pint of San Miguel perched on his dashboard.

The van driver was stopped by Merseyside Police’s road policing unit in Kirkby at around 10.40pm on Monday.

Reporting the incident on Twitter, police shared a photo of the pint glass sitting on the vehicle’s dashboard.

Officers said the 31-year-old driver was ‘too drunk’ to provide a breath analysis and was arrested at the scene.

‘Any idea what made us stop this one?,’ the force said.

‘Driver was too drunk to provide and he’s been arrested and is now in custody. Another selfish drink driver off the roads.’

In an update today, a spokesperson for Merseyside Police said the 31-year-old man, from Bootle, had been arrested and remains in custody.

‘Officers stopped a van in the Whitefield Drive area of Kirkby at around 10.40pm last night,’ the statement read.

‘A 31-year-old man from Bootle was arrested on suspicion of failing to provide a specimen for analysis, failing to co-operate with a preliminary test, possession of a controlled drug of Class A (cocaine) and using a vehicle without third party insurance. He is currently in custody.’

Stop congratulating yourself on being an ally and actually do something

‘I just want my food!’ I yelled in my head (Picture: Samantha Renke) ‘It’s such a shame, I feel sorry for you. God made me like me and not like you,’ said the delivery man, gesturing to his own body, then to me in my wheelchair. They weren’t exactly the words I was expecting as […]

Carol Vorderman has joined the Celebrity Gogglebox cast! (Picture: Instagram/PA) Dame Maureen Lipman has been replaced yet again on Celebrity Gogglebox this time with Carol Vorderman taking her place after she sensationally quit the series last year. Coronation Street actress Maureen became a favourite with fans, sitting on the couch alongside Gyles Brandeth, however, decided […]

Ebiowei will become a Palace player on 1 July (Picture: Getty) Crystal Palace have confirmed the signing of Malcolm Ebiowei, with the winger turning down Manchester United in order to join the Eagles. Palace have agreed terms with the 18-year-old who will join up with his new side on 1 July when his contract with […]