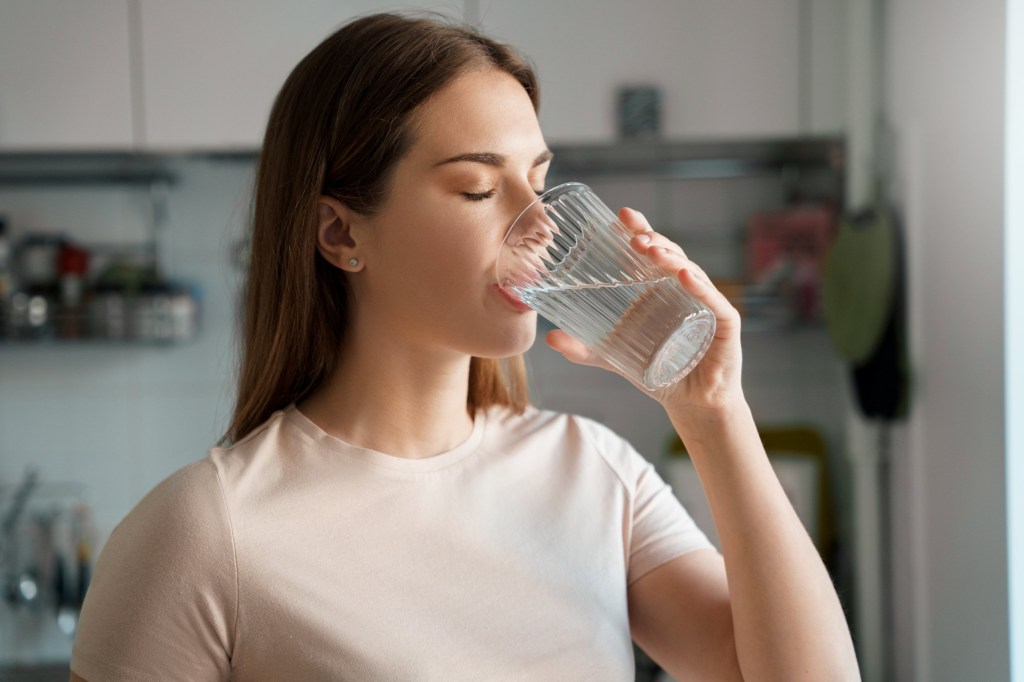 A new study has suggested we don’t need to drink as much water as we thought (Credit: Getty)

How much water should you drink each day?

It’s a question that goes back and forth with study after study claiming to land on the magic amount of water consumption for the average person.

Typically, we’ve been told to consume around six to eight mugs a day. That’s what the NHS says, after all.

But now scientists say that may be too much.

Research from the University of Aberdeen published in Science this week shows the recommended intake of (around) two litres of water a day seldom matches our actual needs and in many situations is too high.

Given around half of our daily intake of water comes from food, scientists estimate we only really need around 1.5 to 1.8 litres per day.

Previous research in this area depended on surveys applied to small samples of people, but scientists have now collaborated across the world to measure water turnover using a stable isotope technique.

They surveyed 5,604 people aged between eight days and 96 years old, from 23 different countries.

Research involved people drinking a glass of water in which some of the hydrogen molecules were replaced by a stable isotope of the element called deuterium, which is found naturally in the human body and is completely harmless.

The rate of elimination of the extra deuterium reveals how quickly water in the body is turning over.

Those living in hot and humid environments and at high altitudes as well as athletes, pregnant and breastfeeding women need more water as the research showed water turnover is higher among them.

Energy expenditure is the biggest factor in water turnover, with the highest values observed in men aged 20-35, who turned over an average of 4.2 litres per day.

This decreased with age, averaging 2.5 litres per day for men in their 90s.

Water turnover is not equal to the requirement for drinking water, Professor John Speakman from the University of Aberdeen explained.

‘Even if a male in his 20s has a water turnover of on average of 4.2 litres per day, he does not need to drink 4.2 litres of water each day,’ he said.

‘About 15% of this value reflects surface water exchange and water produced from metabolism.

‘The actual required water intake is about 3.6 litres per day. Since most foods also contain water, a substantial amount of water is provided just by eating.

We also get plenty of water just from eating food (Credit: Getty Images)

The England skipper donned FIFA’s anti-discrimination armband instead (Picture: Getty) England’s players took the knee prior to kick-off in Monday’s World Cup opener against Iran after earlier U-turning on wearing a OneLove rainbow armband. The Three Lions have long made the anti-racism gesture before matches, though did not do so in September’s Nations League games […]

Woman survives on diet of biscuits due to rare stomach condition

Talia has gastroparesis a little-known long-term condition (Picture: Joseph Walshe/SWNS) Talia Sinnott eats up to ten digestive biscuits and plain crackers a day because it’s the only food she can keep down. The 25-year-old suffers from gastroparesis, a chronic illness which means her stomach struggles to process food. She was diagnosed with the rare condition […]

Sonia fears that Dotty will evict her when she inherits the house (Picture: BBC / Jack Barnes / Kieron McCarron) Sonia Fowler (Natalie Cassidy) is left fearing that she’ll be left homeless in EastEnders, convinced that Dotty Cotton (Milly Zero) will inherit Dot’s (June Brown) house, in which she currently resides. Emotions run high in […]