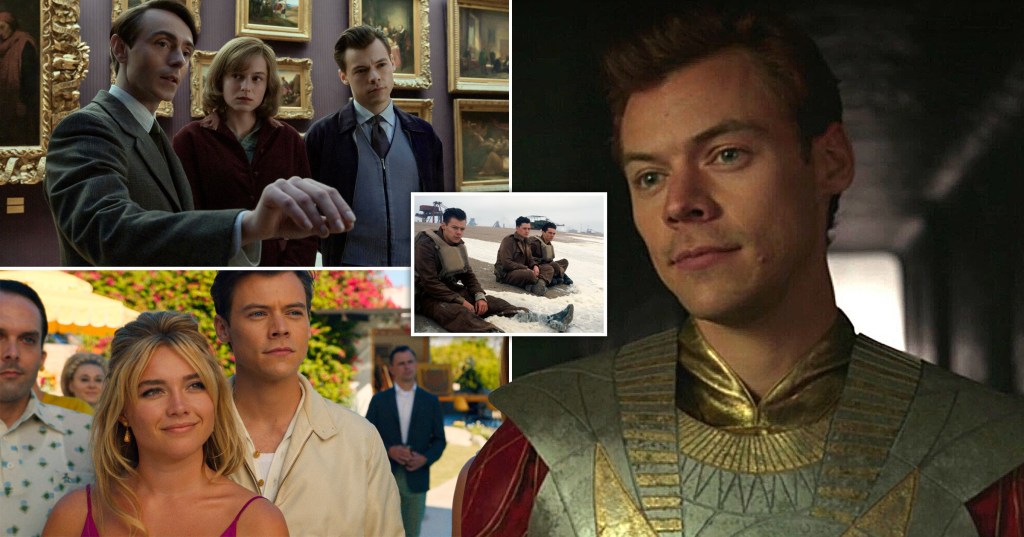 This isn’t the first time you will have seen the popstar in the cinema (Picture: AP / Warner Bros / Amazon Studios)

Pop superstar, fashion icon, and now a star of the big screen – Harry Styles has come a long way since The X Factor.

The star, 28, first rose to popularity as a solo contestant on the hit talent show, before joining One Direction alongside bandmates Liam Payne, Niall Horan, Louis Tomlinson, and Zayn Malik.

The group became one of the best-selling boy groups of all time before splitting in 2016.

Since then, Harry has had a wildly successful solo career, as well as turning his attention to acting.

He plays one of the lead roles in new psychological thriller Don’t Worry Darling, directed by his girlfriend Olivia Wilde, that tells the story of a 1950s couple embroiled in a web of mystery and deceit in a seemingly idyllic town.

The film has been released today (September 23), though it won’t be the last we see of Harry in cinemas this year as he is set to star in romantic drama My Policeman, due to be released next month.

As we get ready for a double dose of Harry’s acting magic, we take a look at his other film roles across the years.

The film is set in World War II and tells the story of the Dunkirk Evacuation.

Harry received rave reviews for his performance, though he feared he had peaked too soon into his acting career.

Speaking to press on the red carpet at the film’s premiere, he said: ‘I feel very lucky to be a part of Dunkirk.

Harry Styles made his Marvel debut in 2021 in a cameo role (Picture: Marvel Studios)

In a smaller role, Harry made a cameo in 2021 Marvel superhero film Eternals.

Ethan Nwaneri can be a breakout star like Phil Foden, says Rio Ferdinand (Picture: Getty) Arsenal youngster Ethan Nwaneri has been compared to Manchester City star Phil Foden by former Manchester United defender Rio Ferdinand. Nwaneri became the youngest player in Premier League history after making his debut for the Gunners in their victory over […]

Katy Perry on why she refuses to get full-time nanny for her and Orlando Bloom’s daughter, two

Rhaenyra has to deal with plenty of prying eyes in court – particularly from the Queen (Picture: HBO) Warning: spoilers ahead for House of the Dragon episode 6. After five weeks of Milly Alcock and Emily Carey portraying Princess Rhaenyra Targaryen and Lady Alicent Hightower in House of the Dragon, episode 6 of the Game of […]