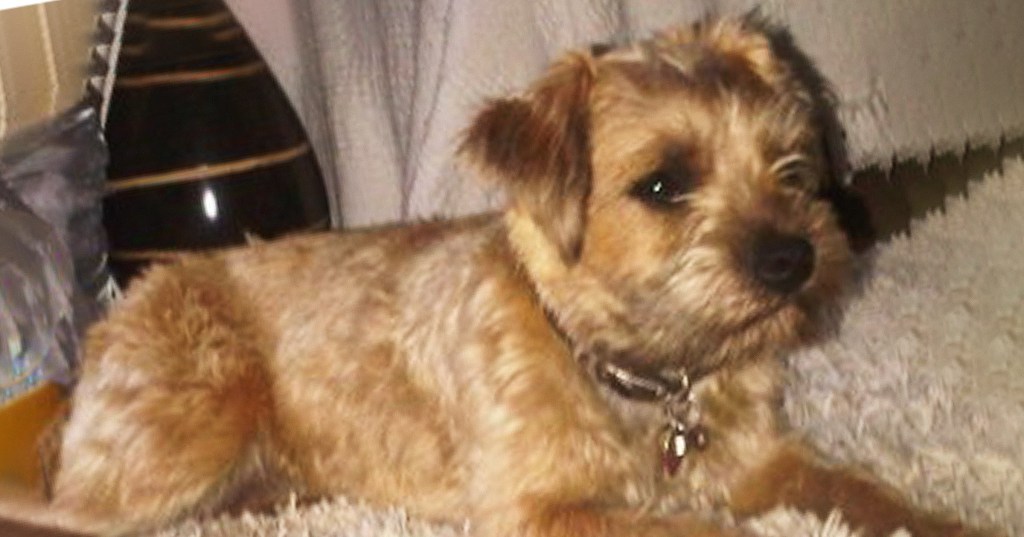 Missie had been missing for 12 years (Picture: Jam Press)

But now, almost 12 years after the puppy first went missing, the dog has been found.

The 51-year-old NHS worker originally bought the dog, called Missie, for her son, Oscar, as a birthday present.

But Liz believes the pup was stolen in February 2011. And, after years of chasing possible sightings, the family thought they would never see their pet again.

However, Missie was found last Tuesday, November 15, by a member of the public and the family have since been reunited with their long-lost canine.

As Missie disappeared so soon after Liz got her, the dog’s microchip was still in the breeder’s name.

But last week the animal was handed into dog wardens and the family were reunited with her at their home in Harpenden.

‘It was a mixture of pure joy but also sadness’ (Picture: Jam Press)

However, vets think Missie has spent the last decade being used for breeding – as a result, she’s very wary and timid.

Liz said: ‘It was a mixture of pure joy but also sadness, as Missie was in a terrible state.

‘She had obviously been used constantly for breeding and was very nervous and timid.

‘We believe she had been kept on a chain and beaten. Every time I went to put a lead on, she was so scared.’

But after a week of being back with Liz, Missie is now settling in and making up for lost time.

‘Her tail is starting to wag and hopefully she’s beginning to realise she’s back home safe and sound,’ Liz adds.

Now Liz is urging all pet owners to get their dogs microchipped.

She said: ‘I hadn’t got round to changing the breeder’s details to mine so there were a few complications.

‘We got there in the end, but I’d like this to be a lesson to all owners to remember to update their pets’ details.

‘It only takes a few minutes, but it’s vitally important and could mean the difference between finding your pet or losing it forever.’

MORE : Mum with fear of tractors takes six mile detours when dog walking to avoid them

MORE : These are the trendiest dog names of 2022

MORE : Christmas gift ideas for dogs, cats, and the pet owners that love them

What does DNA stand for, where is it found and who discovered it?

Every living organism is made up of DNA (Picture: Getty Images) Every single living thing we know of is made up of DNA. From that houseplant you’re desperately trying to keep alive to your nearest and dearest – every single one of you contains DNA. Simply put, DNA is a long molecule containing the information […]

To view this video please enable JavaScript, and consider upgrading to a web browser that supports HTML5 video Holly Willoughby has insisted any I’m A Celebrity… Get Me Out Of Here! viewers who are upset by the results should make sure they vote for their favourites. The This Morning star urged fans to pick up […]

To view this video please enable JavaScript, and consider upgrading to a web browser that supports HTML5 video The Great British Bake Off finalists have got a tough hill to climb during tonight’s finale after the bakers fail to impress with their creations. After 12 weeks, it all comes to a head tonight as  Syabira, […]