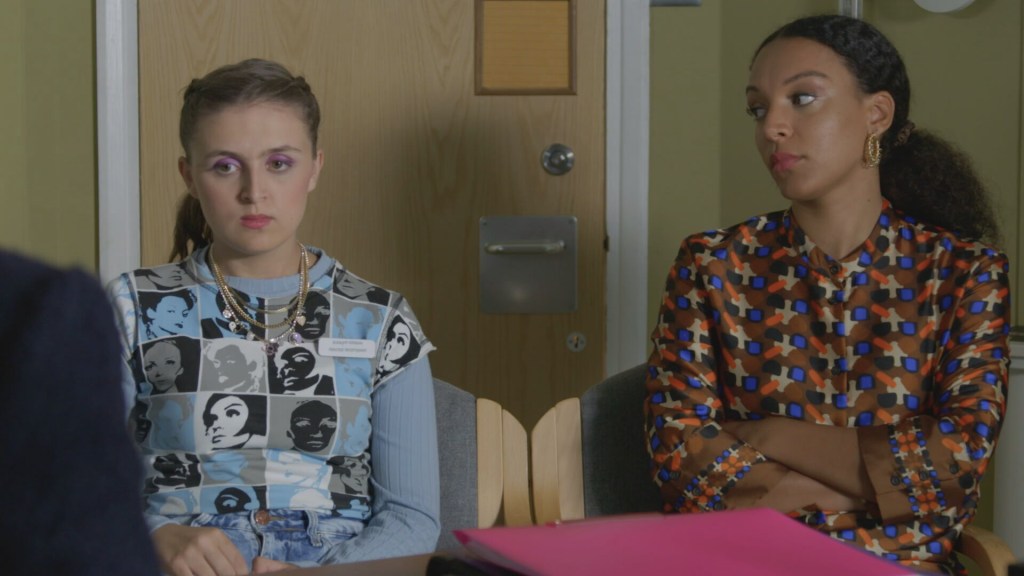 Princess will do anything to ensure she looks good (Picture: BBC)

If Doctors has a regular villain, it is surely Princess Buchanan (Laura White). While she occasionally reveals a softer side, more often than not, she is rude and controlling.

This week, she is being shown how to do a particular procedure by Sid (Ashley Rice) when she discovers Scarlett’s ID pass on the floor. This matters because it suggests Scarlett (Kia Pegg) was near the ultrasound machine when it broke (she did, in fact, accidentally break it).

Princess confronts Scarlett directly who panics. Princess wants to see Bear (Dex Lee) about this matter, but he is unavailable. They go to see Zara (Elisabeth Dermot Walsh) instead. Karen (Jan Pearson) tells Scarlett exactly what to say and in the end, Zara believes her explanation. Princess is angry and feels increasingly isolated.

Princess continues her quest to blame someone for the broken ultrasound machine, but her colleagues such as Bear and Sid are starting to lose interest. She is pleased to get a call from Dr Abega at her new surgery but otherwise gets herself into trouble because of her bad attitude.

She is rude to Scarlett and Valerie (Sarah Moyle) but is told off by Zara after she is seen being rude to a patient. This isn’t the first time this happened.

Later, Princess continues to be rude to everyone but nevertheless attracts a surprising amount of sympathy from Ruhma (Barti Patel). But then, she receives an important phone call.

Could her luck be about to change?

The complex of tunnels represents a dark chapter in Britain’s war history (Picture: Bell & Co/SWNS) A bunker built on British soil by Nazi soldiers has gone on the market. The historic site housed 24 Third Reich fighters after they invaded Geurnsey in the Channel Islands. After sweeping through France, German forces took control of […]

There are loads of great places to ice skate in London this Christmas (Picture:Getty) Christmas is almost upon us, and what’s one of the best ways of getting into the festive spirit? Ice skating, of course! Whether you fancy yourself as the next Torvill or Dean, or need a penguin aid to keep you upright […]

Gary Neville is appearing as pundit for the Qatar-owned beIN Sports channel during the World Cup (Picture: ITV) Gary Neville has aimed a thinly-veiled dig at King Charles in defence of his presence at the Qatar World Cup. The former Manchester United and England defender, an increasingly outspoken political voice and supporter of human rights, […]