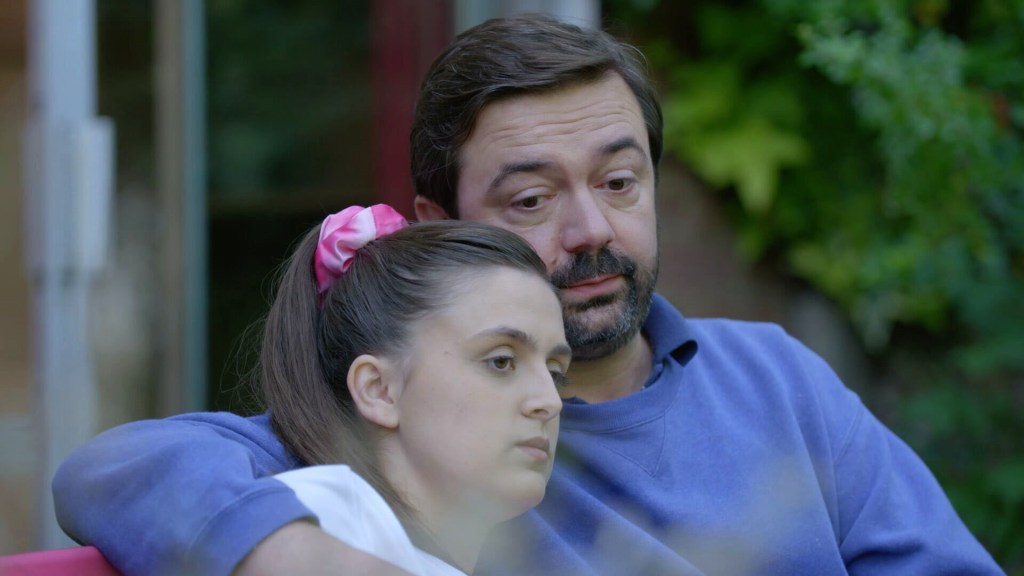 Can Scarlett manage without her dad? (Picture: BBC)

Scarlett (Kia Pegg) receives some shock news this week in Doctors as her father Brian (Simon Lowe) suddenly reveals that he is planning to move out to work with her Auntie Liz in her shop. Scarlett feels abandoned, but Brian reassures her. It will be good for Scarlett to have some fun for a change and not to have worry about him.

The arrangement should also help bring in some much-needed money: lack of funds has been a big problem for the Kiernans recently.

Scarlett reveals she is worried that Brian will quicky forget all about her as her mother appears to have done. Brian assures her: this won’t happen.

As they begin to pack up, Scarlett notifies the landlady but is disappointed and annoyed to learn that they will still have to pay rent until the end of March. Scarlett decides there and then that they will do a runner without paying. She tells Karen (Jan Pearson) about this.

Maria murdered in stabbing in Coronation Street as Max looks on?

Leyla is devastated over a loss that hits hard in Emmerdale

She is touched when Karen invites her to stay with her and Rob (Chris Walker) when Scarlett’s friend, Courtney lets her down.

There is high drama on moving day as Scarlett and Brian say their goodbyes. Then, suddenly her landlady, Mrs Brightwater reveals she is on her way now to pick up her rent!

Can Brian and Scarlett get away in time?

MORE : Izzy’s return to Coronation Street after shielding resonates with many disabled people

MORE : The Big Questions: Richard Blackwood reflects on the role of soaps, lessons and chasing fame

Erling Haaland could be the most valuable player in the world (Picture: Getty Images) Erling Haaland’s agent says no club will pay this amount, but the Manchester City striker is still worth ‘at least €1billion (£884m).’ The Norwegian moved to City from Borussia Dortmund last summer after the Premier League side met the release clause […]

Myles, though only 18, managed to impress three Dragons (Picture: BBC) The grandson of presenting legend David Dickinson had three investors fighting over him after showcasing his impressive business on Dragons’ Den, aged only 18. Myles Dickinson-Brown entered the den and offered the likes of Deborah Meaden, Sara Davies and Peter Jones a stake in […]

It was a close shave for the two men (Picture: Facebook/Lachlan Mcdougall Monk/ rowan_rowdy_sutton/ instagram) A fearless man wrestled a massive five-metre long crocodile with a machete after it mauled his mate. Rowan ‘Rowdy’ Sutton and Lachlan McDougall Monk, 29, were fetching crocodile eggs from a nest near Darwin, Australia, when the animal lunged and […]