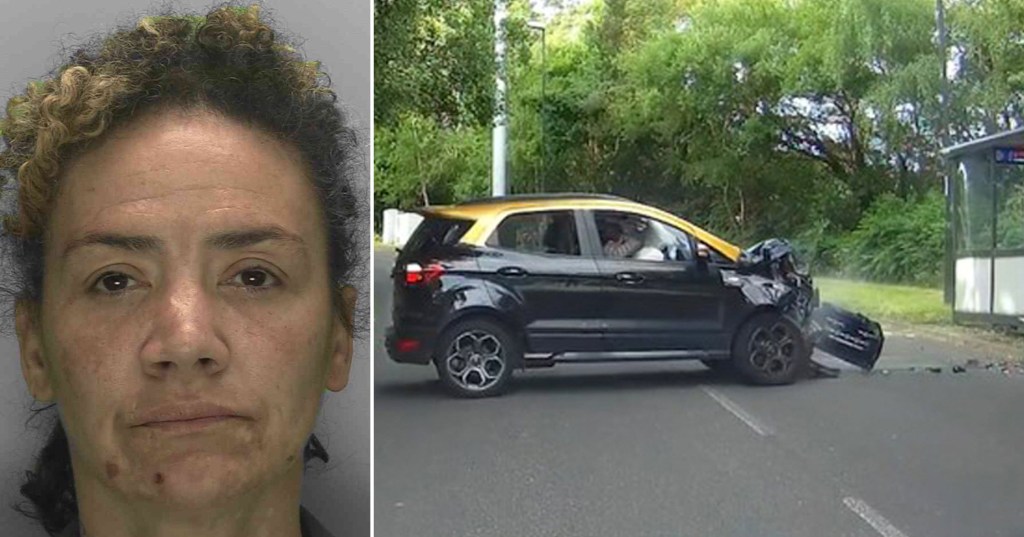 Monique Moss, 46, was jailed for two years after the crash (Picture: PA)

This is the disturbing moment a woman crashed her friend’s car into a glass bus stop.

The 46-year-old was seen on another driver’s dashcam abandoning the smashed-up vehicle sideways in the middle of the road and walking away.

Sussex Police attended the scene of the incident at about 8am, and the driver was nowhere to be found.

She had visited a friend that morning, stealing the set of keys for the Ford despite already been disqualified from driving.

Monique Moss was charged with a number of offences including a theft of a vehicle (Picture: PA)

Moss abandoned the Ford on the road after the collision (Picture: PA)

Detective sergeant Mark Williams said: ‘Moss could have seriously injured herself or someone else.

‘It is only by chance that no one else was involved in the collision that morning.

‘She took absolutely no responsibility for her actions, even walking away from the wreckage as if nothing had happened.’

After the incident on July 2, police charged Moss with dangerous driving, theft of a vehicle, driving while disqualified, being in charge of a vehicle left in dangerous circumstances, failing to report a road traffic collision, and driving while uninsured.

She appeared before Lewes Crown Court where she was jailed for two years and was further disqualified from driving for four years.

When did Spotify Wrapped 2022 stop counting and when does 2023 start?

Spotify wrapped was released on November 30 (Picture: Spotify) The moment many music fans wait all year for is now upon us – Spotify Wrapped 2022 is finally here! Spotify Wrapped is a retrospective round-up of all the music and podcasts a Spotify user has been listening to regularly over the time it’s been collecting […]

Arma 3 – Is this the real life? Is this just fantasy? (pic: Bohemia Interactive) The creators of military simulator Arma 3 has offered some top tips on how to tell the difference between the game and real life. If you’re not into hardcore military simulations you’ve probably never heard of Arma 3, but there’s […]

Tom Rosenthal got very emotional when wrapping up Plebs (Picture: ITV) Plebs star Tom Rosenthal admits he ‘cried a lot’ when filming the final ever scenes of his long-running show. After being on screen since 2013, the comedy series will wrap up with a feature length special Soldiers of Rome, which will be released next […]