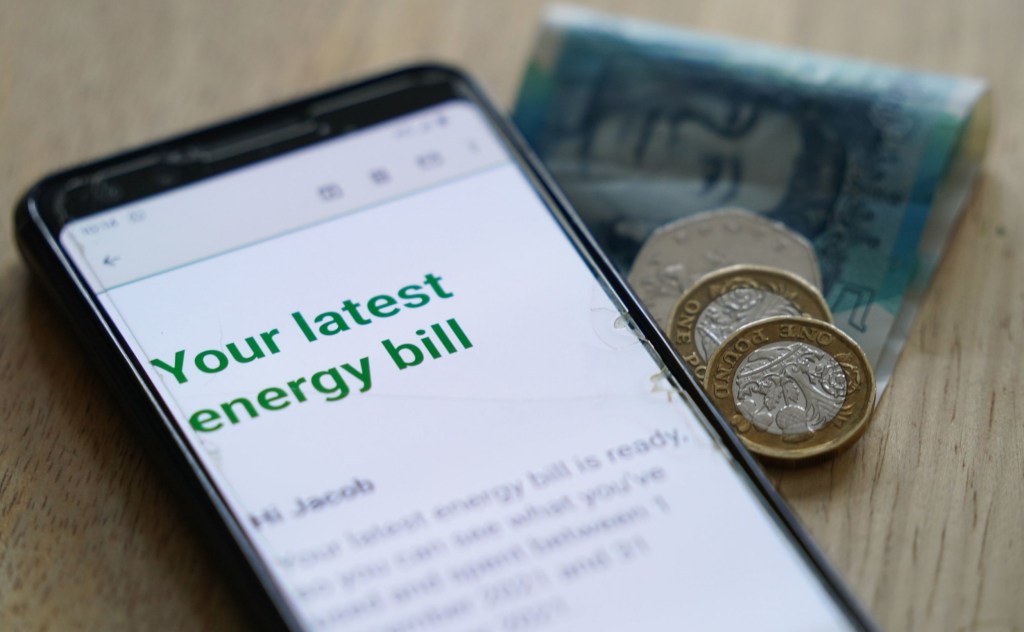 Bills are going up for everyone – but this is something else (Picture: PA)

A disabled man has described getting his £4,000 energy bill as like ‘being mugged’.

Christopher Barnes’ electricity costs soared without explanation this month, up from less than £60 in October.

The 58-year-old from Newcastle was sent the steep demand for payment from Ovo, which was recently taken over by SSE.

He claims to have had no explanation as to why it was so high and was simply told it was a balance adjustment, ChronicleLive reports.

Mr Barnes said: ‘I felt absolutely shocked and I couldn’t believe it was real. There’s no way I would be able to afford it.

‘I knew straight away that I would be phoning them up, complaining and fighting it because it is so extreme. It’s like being mugged.’

He said he worried about the impact on vulnerable patients receiving a similar letter, adding: ‘It can really affect their mental health.

‘It could terrify them if they already have lots of debt. It could tip them over the edge into suicide.’

In a statement a spokesperson for the energy firm apologised to Mr Barnes for ‘shortfalls in service’.

They told ChronicleLive: ‘We can confirm his account is now up to date and we’ve offered a goodwill gesture for the inconvenience caused.’

Pensioners will begin to receive extra help paying for their energy bills from today.

The first chunk of up to £600 will land in the bank accounts of more than 11 million people.

An extra £300 per household cost of living assistance payment will come on top of the usual winter fuel payment.

The money will appear in bank statements with the payment reference starting with the customer’s national insurance number followed by ‘DWP WFP’ for people living in England, Scotland and Wales, or ‘DFC WFP’ for people in Northern Ireland.

Further support to be paid next year was announced by chancellor Jeremy Hunt in his autumn statement last week.

Payments will include a further £300 for pensioners, £900 for households on means-tested benefits and £150 for those on disability benefits.

The Rolls-Royce AE2100 Hydrogen Test at Boscombe Down (Credits: Steve M Smith FBIPP) Low-cost airline easyJet and aerospace manufacturer Rolls-Royce said they have powered a concept aircraft engine with hydrogen in a world-first. The companies claimed the ground test was a ‘major step’ towards proving that hydrogen could be a zero-carbon aviation fuel. The test took place […]

Alexa has revolutionised voice assistants, but she doesn’t seem to make Amazon much money (Credit: Amazon) Think of Amazon’s most successful product, and you probably come up with either the Kindle e-reader or Alexa. But, as it turns out, the all-conquering voice assistant may not have such a glowing reputation inside the company. After announcing […]