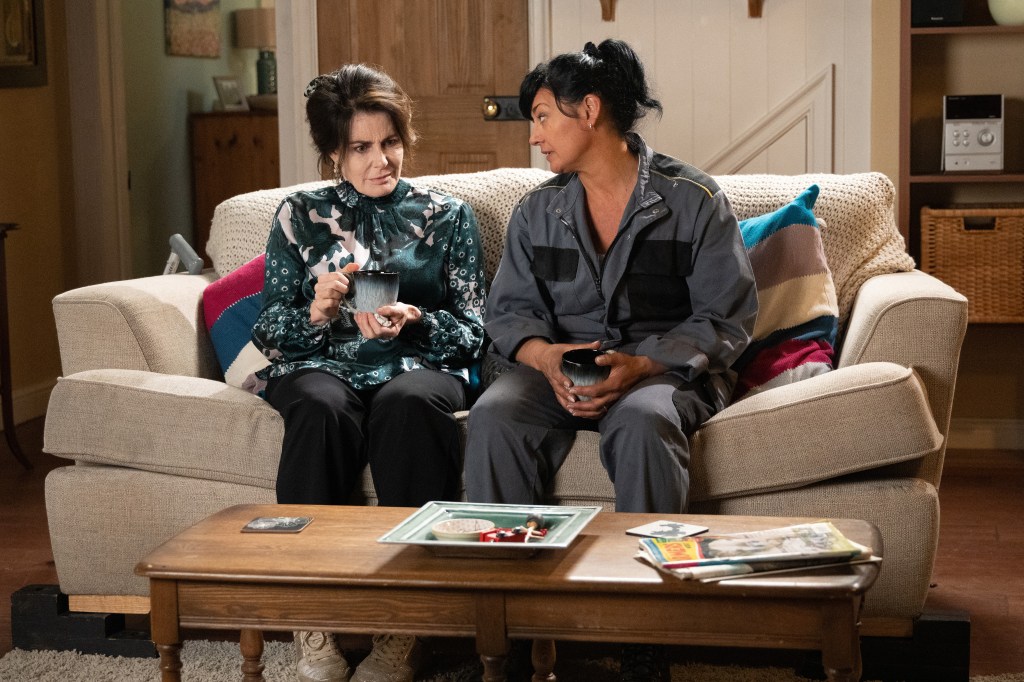 Dying Faith informed Moira of her decision to take her own life (Picture: ITV)

Faith Dingle (Sally Dexter) left Moira (Natalie J Robb) in shock in Emmerdale, as she revealed her plans to take her own life.

The ITV soap stalwart, who is terminally ill with cancer, discovered earlier this week that she likely has less than a month left to live, which left her not only upset, but also concerned about the effect the disease will have on her in her final weeks.

Determined to go out on her own terms, Faith decided that she would take her own life, and thus opened up to daughter-in-law Moira, who has been by her side every step of the way.

Dignity in Dying – which campaigns for a change in the law on assisted dying to allow this option for terminally ill, mentally competent adults – has been working with Emmerdale on the storyline to ensure it’s portrayed as accurately as possible.

The campaigning organisation has provided the serial drama with research and personal testimony about the unimaginable choice Faith that is facing.

Emmerdale researchers, producers and actors met with Steve Jetley, whose late wife Tina Humphrey, a Britain’s Got Talent finalist, took her own life in 2017 at the age of 45 while dying of an aggressive skin cancer that had spread throughout her body.

Faith discovered earlier this year that her cancer is terminal (Picture: ITV)

‘Like Faith, Tina desperately wanted to live but her cancer had taken away that choice,’ said Steve. ‘When it became clear that nothing more could be done, she was determined to go out her own way; to stay ‘Tina’ until the end.

‘She had witnessed her own parents’ painful deaths from cancer and knew she wanted to take control if her suffering became unbearable.

‘She planned her end carefully but it didn’t go as expected. It took her 15 long hours to die; it was agony not knowing if she was aware or in pain. It could have been so different if she’d had the proper choice she longed for.’

Dignity in Dying campaigns for greater choice, control and access to services at the end of life. It campaigns within the law to change the law, to allow assisted dying as an option for terminally ill, mentally competent adults alongside access to high-quality end of life care.’

Molly Pike, Media and Campaigns Officer at Dignity in Dying, said: ‘Many people are able to die peacefully thanks to the excellent end-of-life care available in this country, but that is not the case for everyone.

Faith is worried about the losing who she is amid her cancer battle (Picture: ITV)

‘Facing the prospect of a prolonged or painful death, Faith is not alone in feeling she has no choice but to take matters into her own hands.

‘Without a safe, legal option to die on their own terms in this country, every year hundreds …read more

Susanna Reid and Ben Shephard are continuing to wear dark colours on Good Morning Britain, even though the period of national mourning is over (Picture: ITV) The late monarch died peacefully at Balmoral on September 8 at the age of 96 (Picture: Getty) The coffin of Queen Elizabeth II was carried out of Westminster Abbey […]

Wet Leg said touring ‘got on top of us’ (Picture: Hollie Fernando) We Leg have apologised to fans for missing a couple of gigs on their world tour, citing ‘mental and physical health’ concerns. The British indie band’s single Chaise Longue viral earlier this year, winning praise from the likes of Dave Grohl, with their […]