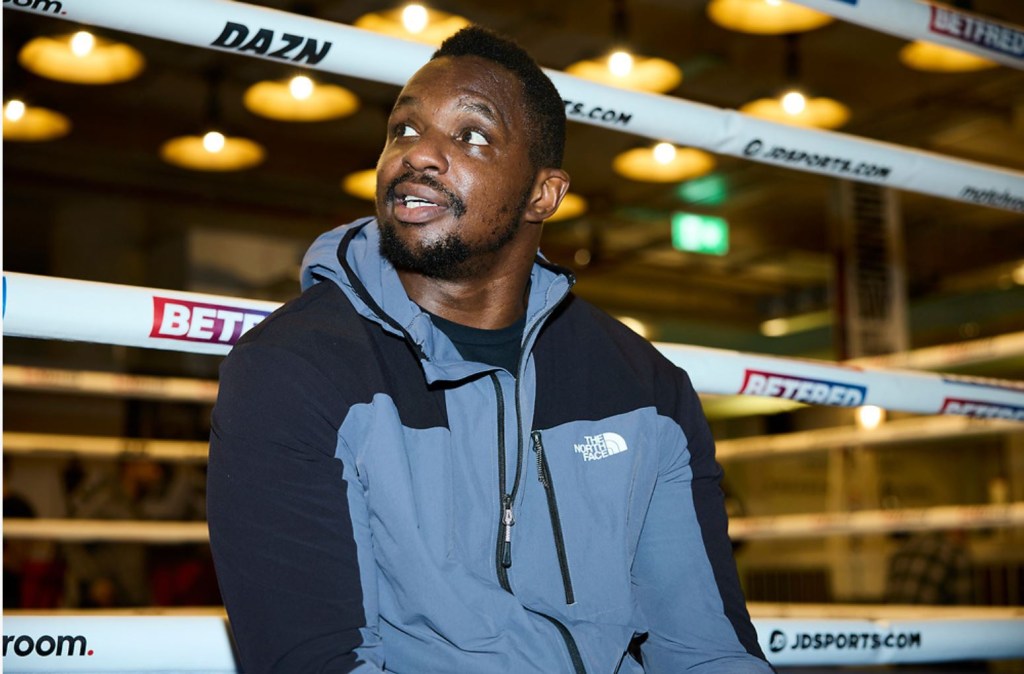 Whyte returns to action on Saturday in the capital (Picture: Mark Robinson Matchroom)

David Haye has warned Dillian Whyte a defeat to Jermaine Franklin this weekend is ‘out of the question’, insisting he needs a devastating knockout victory following his loss to Tyson Fury.

‘The Body Snatcher’ returns to the ring on Saturday, taking on undefeated American Franklin at the O2 Arena in his first fight since being knockout out by Fury in front of 90,000 at Wembley in April.

A rematch against Anthony Joshua could await for Whyte should he return to winning ways in the capital, having shared an intense rivalry with the former champion that culminated in a seventh round defeat in 2015.

Promoter Eddie Hearn has plans to make the rematch a stadium fight next year but defeat for Whyte against Franklin will derail those plans, with the Michigan fighter likely to be rewarded with his own lucrative showdown against Joshua if he can cause the upset.

Franklin has won all 21 of his professional fights and while he has notable wins over Rydell Booker and Jerry Forrest on his record, taking on Whyte marks a major step up for the 29-year-old.

But after damaging start to the year, former cruiserweight and heavyweight champion Haye insists Whyte must not only win, but win well.

Franklin out to spoil the comeback party (Picture: Getty)

‘They need a definitive conclusion, an “I’m back” victory. They need to park up that Tyson Fury defeat and prove they are ready get in there against Anthony Joshua and give us that rematch we want.

‘From Dillian’s point of view, yes, [defeat] is out of the question, it can’t even be a thing on his mind. He is getting in the ring with someone who has never fought at his level, not once, not even remotely close.’

Whyte has already been on the receiving end of a surprise defeat in recent years, knocked out cold by Alexander Povetkin at Matchroom Fight Camp in 2020 having floored the Russian twice in the earlier rounds.

Haye wary of the unknown threat of Franklin (Picture: Getty)

Franklin represents a far less experienced threat having not fought outside the USA but remains a dangerous unknown quantity that Whyte must be wary of.

‘Dillian is the favourite by a long way. But it is the unknown factor in an unbeaten fighter,’ Haye said.

‘There is something about someone who has never lost or tasted defeat as a pro fighter. It gives them that X-factor. We don’t know what he has got. His team might have been waiting for this one opponent to unleash a world class fighter.

‘There are very few recognisable names on Jermaine’s record but that doesn’t mean he can’t fight. It just means his handlers have selected easier opposition than Dillian had to deal with earlier …read more

‘He made himself smaller!’ – Roy Keane takes aim at Manuel Neuer following ‘schoolboy defending’ for Japan’s winner against Germany

Asano fired past Neuer from a tight angle (Picture: Getty) Roy Keane has slammed Germany’s defending following their shock World Cup defeat to Japan, blaming Manuel Neuer for making himself ‘too small’ for the winning goal. The four-time world champions appeared in control of their group opener having taken the lead through Manchester City midfielder […]

Elouise McDermott, 18, said Abu Munahim treated her ‘worse than a prisoner’ (Picture: Cavendish Press) A man who beat his teenage girlfriend until she thought her ‘only way out was in a body bag’ has been jailed. Abu Munahim, 26, met Elouise McDermott last May, when she was a ‘vulnerable’ 17-year-old mum who had just […]