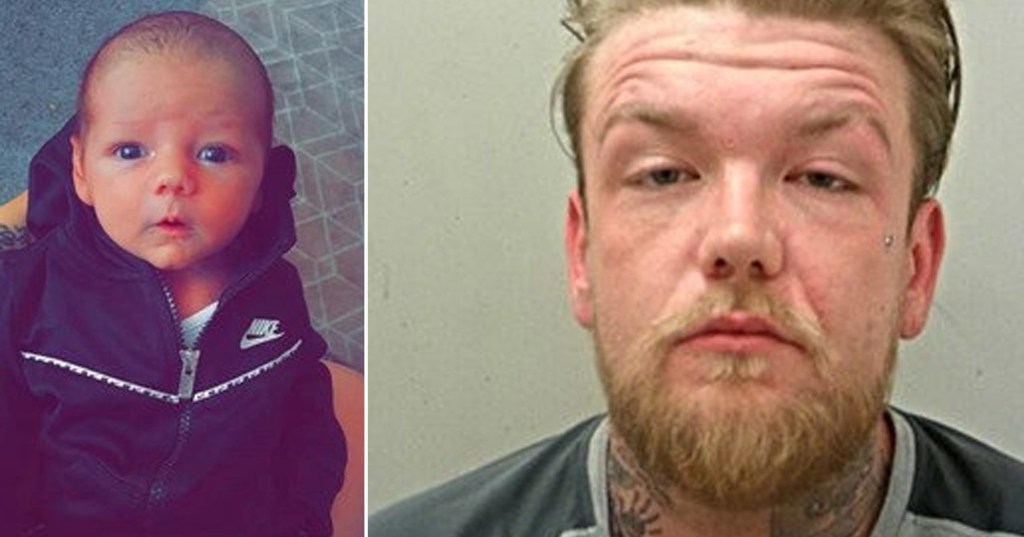 Oliver Mailey caused his baby catastrophic head injuries, a bleed on the brain, and broken ribs after shaking him twice (Picture: SWNS)

A dad has been jailed for life after he shook his baby so hard it killed him.

Oliver Mailey, from Burnley, caused catastrophic head injuries to his seven-week-old son, Abel-Jax, in November and then ‘lied to save his own skin’.

But a post-mortem found Abel had suffered several broken ribs and a brain bleed, which were caused by shaking incidents in the weeks leading to his death.

Mailey, 26, was looking after the baby while his partner, Mollie Gourton, was at work.

Shortly after she arrived, she received a video call from Mailey who said: ‘Abel’s gone weird.’

He turned the camera to show Abel looking limp on his lap, and Mollie screamed at him to call an ambulance.

Mailey insisted his son had gone floppy after a feed – a story he maintained to the emergency services.

He was directed to carry out CPR on Abel while Mollie ran home from work and paramedics rushed to the house.

Abel was taken to Royal Blackburn Hospital where Mailey continued to deny any involvement in baby’s collapse when questioned by Mollie.

He was transferred to Manchester Children’s Hospital in a critical condition but died three days later.

The parents were both arrested on suspicion of causing grievous bodily harm, and later murder following Abel’s death.

It took two weeks for police to determine Mollie was not at home when Abel sustained his injuries, clearing her of any wrongdoing.

Mailey will have to serve 16 years behind bars before he can apply for parole (Picture: Lancashire Constabulary/SWNS)

Mailey continued to lie about hurting Abel until December 2022 when he admitted manslaughter. It wasn’t until a month later that he admitted to the first shaking.

Preston Crown Court heard Mailey was a regular cannabis user, and was unaware shaking could cause serious harm, despite a health visitor warning both parents about its dangers during a routine home visit.

Sentencing, Mr Justice Cotter said there was nothing unusual about Abel’s behaviour that would have driven Mailey to his ‘wit’s end’.

He said: ‘The evidence before this court showed Mollie to be a loving and devoted mother. Your actions caused her to lose her beloved son.

‘Her family was blown to pieces. She left home to go to work and returned to what would be a living nightmare for any mother. She had to plan her baby’s funeral alone while under suspicion of murder.’

Mailey must serve a minimum of 16 years before he is eligible for parole.

Kelly Brook reflected on her relationship with her body as she grew older (Picture: GC Images) Kelly Brook revealed she was done with ‘people pleasing’ and felt free of her anxiety as she learned to embrace her body. The 43-year-old model and TV presenter opened up about her body confidence and how she has struggled […]