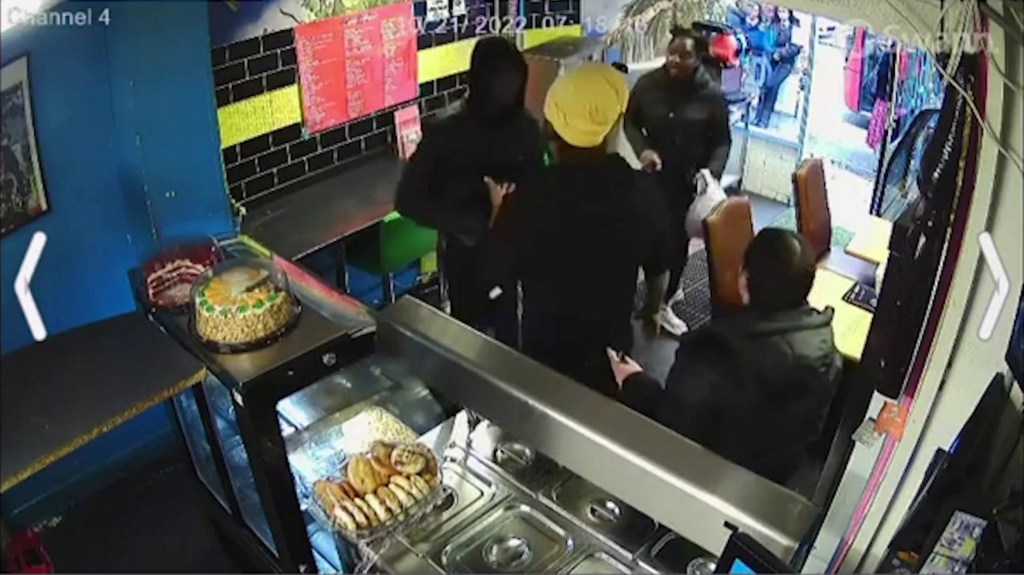 This is the moment a dad tackles a knifeman just a year after his 14-year-old son was stabbed to death.

The man was threatening a girl in Julius Cools’ Caribbean takeaway in south London when he stepped in to remove the machete-sized blade.

He was the youngest person to be stabbed and killed on London’s streets in 2021, a year in which 30 teenagers lost their lives.

Mr Cools was captured on CCTV wrestling the attacker clad in a black jacket with a hood over his head.

The pair roll into a set of chairs and tables and bundle into the counter before he yanks the knife away and orders him to leave Cools Kitchen in South Norwood.

‘I don’t know where I got the energy from, but I just did. He could have stabbed me, I don’t know,’ he said.

Julius Cools confronts the man in his Caribbean takeaway unaware he was armed (Picture: SWNS)

Julius Cools tackles the knifeman and wrestles the blade off him (Picture: SWNS)

Julius Cools said he has ‘no fear’ since his son was killed (Picture: Sky News)

He now claims the police didn’t seem interested in looking at the footage and the knifeman remains at large.

In a statement, the Met Police said the suspect could not be identified from the video and the investigation is closed.

Mr Cools said nobody helped Jermaine when he died but he tried to help the girl.

He added: ‘All I was thinking that day was that the girl could have died in the same way in my shop.

‘I was doing it to protect that girl, she was only 16 or 17, she has her whole life ahead of her.

‘We live in a world where if you leave your house, you don’t know if you are going back home. This is the life we are living now.

‘These young kids don’t care. They will kill you and laugh about it. They do not care. They have no Lord in their heart.

‘All I am saying to people now is to be careful, kids and adults, anyone can get killed any time, any day.

‘I am not scared of them, I don’t care. Since I lost my son last year, I have no fear.’

A police spokesperson said: ‘The occupant in the shop was spoken to – he was not injured. He did not wish to engage with police but advised the incident had been captured on CCTV.

‘CCTV of the incident was viewed …read more

Far Cry 6 – remember then this game was about overthrowing a dictatorship run by Gus from Breaking Bad? (pic: Ubisoft) A recent Ubisoft livestream has announced a free Far Cry 6 update, a 67% discount on the full game, and first details of its next DLC. Back when Ubisoft dropped a Game Of The […]

Tributes flooded in for the late star (Picture: Charles Sykes/Invision/AP) Content warning: the following piece contains references to suicide. Following the death of Power Rangers star Jason David Frank, his wife Tammie Frank has spoken out to reveal that her husband died by suicide. Last week, it was confirmed that the actor had died at […]

The Blues held talks with the Portuguese star over the summer (Pictures: Getty) Chelsea are not currently exploring the possibility of bringing Cristiano Ronaldo to Stamford Bridge in January even though the forward is now available on a free transfer. On Tuesday evening, Manchester United released a statement confirming that the 37-year-old’s contract had been […]