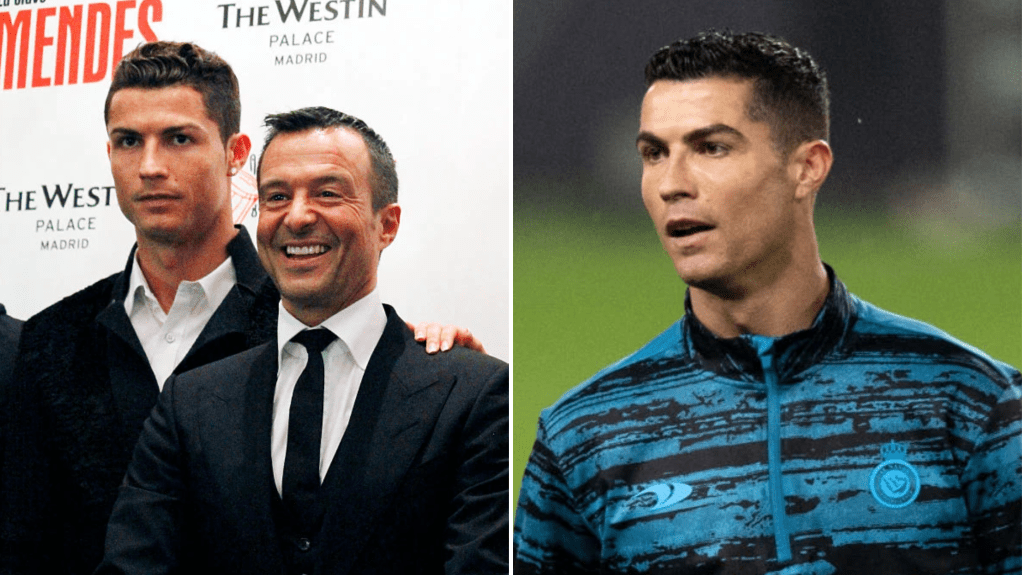 Cristiano Ronaldo fell out with long-time agent Jorge Mendes over his failure to secure a move to either Chelsea or Bayern Munich last summer, according to reports.

The Portuguese superstar is now earning an estimated £175million per year playing for Saudi Arabian side Al-Nassr following the termination of his Manchester United contract after an explosive interview with Piers Morgan.

Ronaldo had wanted to leave Old Trafford back in the summer, though United resisted approaches and there was little interest from Champions League-level teams.

The 37-year-old was briefly linked with a move to Stamford Bridge and the west London club’s new owners are believed to have spoken to Mendes, though the deal was ultimately vetoed by then manager Thomas Tuchel.

It has since been claimed that Ronaldo’s rather turbulent past few months saw him drift apart from Mendes, with his move to Al-Nassr facilitated instead by close friend Ricky Regufe.

Now Spanish newspaper El Mundo are reporting that the veteran forward’s falling out with Mendes – one of the most powerful agents in football – stemmed from his failure to secure Ronaldo a high-profile move last summer.

Ronaldo now has the most lucrative sporting contract on the planet (Picture: Getty)

The former Juventus and Real Madrid star had been desperate to leave United and wanted to continue playing in the Champions League, with the Red Devils having only qualified for the Europa League.

Ronaldo had earmarked a move to either Chelsea or Bayern as his preferred destinations and made his intentions very clear to Mendes, though a transfer to one of those sides never came close to materialising.

With his long-serving agent unable to deliver on a transfer, the pair’s relationship began to break down while it is also claimed that Mendes questioned some of Ronaldo’s own decisions – such as choosing to leave Real for Juventus in 2018.

Mendes had actually encouraged Ronaldo to stick it out at United and fight his way back into the team under Erik ten Hag and felt the club would trigger a one-year extension if he helped them secure a top-four finish.

But the five-time Ballon d’Or winner opted to go down a different route by skipping pre-season training, sulking repeatedly, falling out with his manager and then giving his bombshell interview with Morgan.

Regufe, not Mendes, is now the main man in Ronaldo’s entourage and was chiefly responsible for orchestrating the move to Al-Nassr.

‘One of the children was taken ill,’ she recalled (Picture: Ken McKay/ITV/Rex/Shutterstock) Our Yorkshire Farm star Amanda Owen has revealed her family recently experienced a ‘scary’ medical emergency, when one of her children had to be transported in a helicopter to hospital. For several years, Amanda and her family have been in the spotlight after […]

Marcus Rashford has scored 17 goals so far this season for Man Utd (Photo: Getty) Erik ten Hag is hopeful that Marcus Rashford will sign a new long-term contract with Manchester United so he can ‘construct the best team in the world’. Rashford is a player reborn this season, with 17 goals and six assists […]

Is Ryan Cawood’s life in trouble because of his father Tommy Lee Royce? (Picture: BBC) Happy Valley fans are fearing for the life of a beloved character as the blockbuster BBC crime drama draws to a close. The exhilarating final season of the Sally Wainwright series has seen murder, backstabbing and the ultimate betrayal for […]