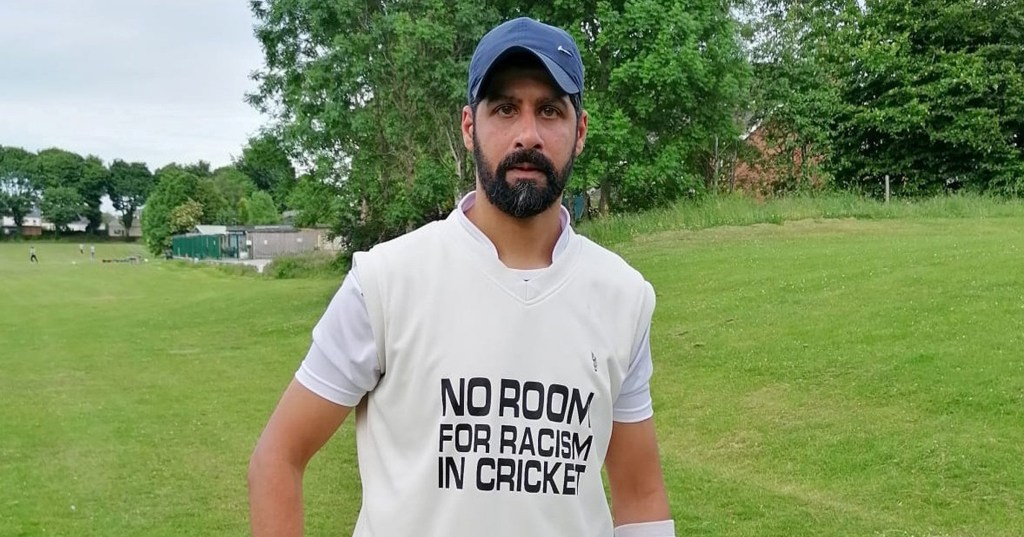 Haider Rasool, 38, in his ‘no room for racism’ jumper (SWNS)

An amateur cricketer claims a Yorkshire league threatened to deduct 12-points from his team when he wore an anti-racism jumper.

Haider Rasool, 38, who plays for the Rockingham Colliery club, made the jersey last year to spread awareness of racism at the game’s grassroots level.

But this season, the secondary school teacher claims Yorkshire Cricket Southern Premier League officials told him the top which says “no room for racism” had broken new guidelines.

Haider, who has been racially abused during his cricketing career, believes it was ‘outrageous’ to ban the statement while allowing large sponsorship messages on kits.

He said bosses have since agreed to ‘support’ his message if he wears the jumper before and after games and not during matches.

Haider, from Sheffield, created the jersey at the start of the 2021 summer season after feeling inspired by the football Premier League’s anti-racism message.

However, when Haider turned up at the start of this season with the jersey, he said his club got a phone call from league bosses telling him he couldn’t wear it.

He said: ‘One of the guys at another cricket club is promoting awareness for mental health – “it’s okay to talk” – and they’ve got it printed on their kit.

‘We put that back to them – that this is about awareness. This is not directed at any group or any religion, any culture.

‘They said, “no, it’s different”. They said that’s a charity organisation, this isn’t.’

Haider said his team were later summoned to a meeting without him where officials told them they could face point deductions if he still wore the jersey.

Haider, whose club has now erected a ‘no room for racism in cricket’ board on their ground, believes discrimination is still being ‘ignored’ at the grassroots level.

He added: ‘At the grassroots level, it’s happening, but nobody really hears about it because no one wants to deal with it. And it’s ignored and neglected.

‘What happened at Yorkshire, I don’t think I’m surprised in any way shape or form, because it happens at the top and filters through to the bottom.’

On Wednesday, several former members of Yorkshire County Cricket Club were charged by the cricket’s governing body, the English Cricket Board (ECB), following an investigation into alleged racism.

The ECB handed out the charges after former Yorkshire spinner and whistle-blower Azeem Rafiq brought to light claims of racism at the club during his time as a player.

Get in touch with our news team by emailing us at webnews@metro.co.uk.For more stories like this, check our news page.

Scientists may have detected a free-floating black hole

The object was discovered thanks to a technique called gravitational microlensing (Picture: Nasa) Astronomers may have discovered the first free-floating black hole in the Milky Way galaxy. The death of large stars leaves behind black holes but the problem is, isolated black holes are invisible. Now, astronomers have for the first time discovered what may […]