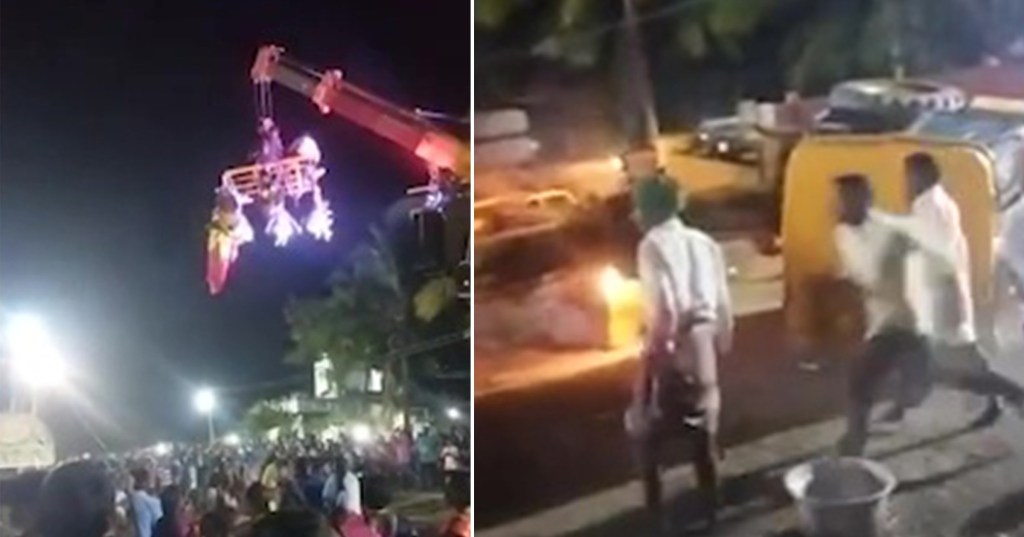 A crane carrying a religious idol at an Indian festival collapsed and killed four people.

Large crowds had gathered in the town of Nemili, in the South East of the country about 50 miles west of Chennai, for the Draupathi Amman festival yesterday.

The procession included a mobile crane, which was carrying eight people suspended about 25 feet above the ground.

The riders on the crane would be lowered to receive garlands from devotees in the crowd.

It collapsed close to the Draupathi temple, sending onlookers running in all directions.

A video from the scene shows people rushing to help the injured after the crane slams to the ground.

The four victims were identified as Chinnasamy, 60; S Bhoopalan, 40; K Muthukumar, 39; and B Jothibabu, 17. Another nine people have been injured.

Police spokeswoman Deepa Satyan said the disaster may have happened because the machinery was operating on uneven ground.

The crane displayed a religious idol to the crowd which reportedly contained around 1,000 people (Picture: Jam Press)

The crane’s operator has reportedly been taken into custody as the investigation continues.

At least 140 people died last October when a bridge over the Machchhu river collapsed in Gujarat, in the west of India.

Hundreds of people who in in the area for a Hindu festival were on the bridge when it gave way.

And six people, including three children, died after their necks were caught in kite strings during the Uttarayan festival in Gujarat last Wednesday.

To view this video please enable JavaScript, and consider upgrading to a web browser that supports HTML5 video The Traitors star Kieran Tompsett has addressed claims that he ‘cheated’, as we’re still recovering from the thrilling climax that was the game show’s finale. In the final roundtable, Kieran dropped the biggest clue ever, leading Faithfuls […]

He isn’t going anywhere! (Picture: Endemol Shine) Beloved Home and Away character Alf Stewart has been at the heart of the drama for 35 years, but he’s not going anywhere soon, according to actor Ray Meagher. The Australian TV legend has reportedly signed a five-year deal to stay on the soap, which he has promised […]