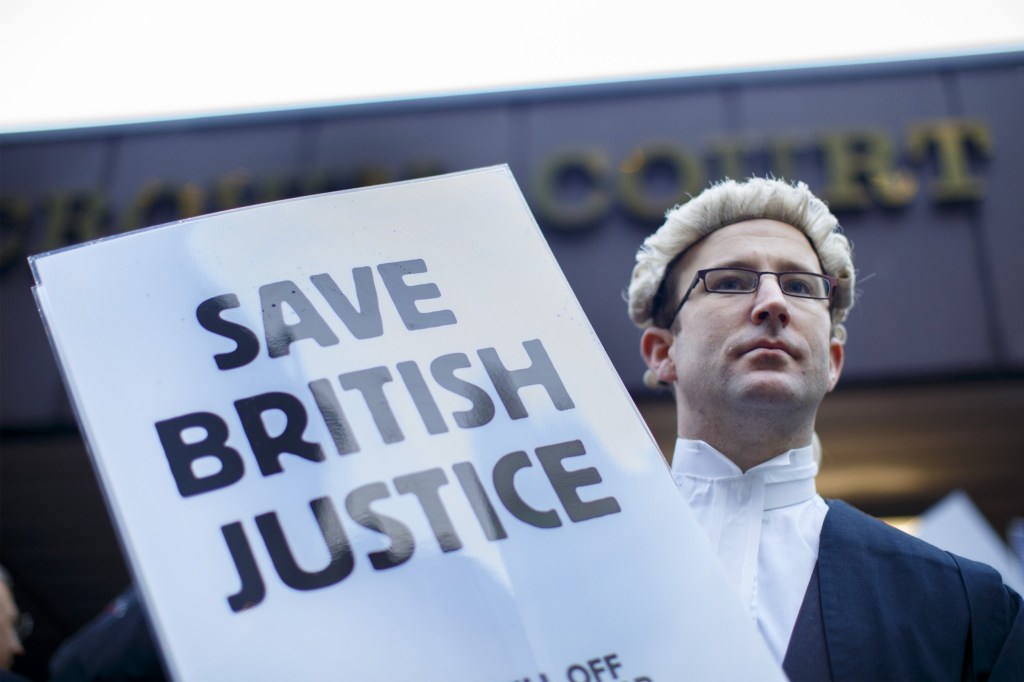 The rolling walkouts will add to the huge backlog of cases stuck in the court system (Picture: LPN/REX/Shutterstock)

Courts could grind to a halt next week after barristers voted to go on strike.

The Criminal Bar Association (CBA) said its members in England and Wales will walk out over a dispute about legal aid funding.

It’s the latest blow to the government in what is threatening to build into a summer of industrial action.

An emergency timetable came into force today on the eve of a massive rail strike and teachers are also on the verge of downing tools.

The barristers’ actions will add to the huge backlog facing the UK’s creaking court system.

Judges are battling to get through the huge amount of criminal cases left in limbo when Covid-19 closed the courts.

The CBA said around 81.5% of the more than 2,000 members to respond supported industrial action.

Criminal barristers have been protesting against cuts to legal aid since the coalition government started to cut funding (Picture: Getty)

Jo Sidhu QC and Kirsty Brimelow QC, from the CBA, said ‘what is at stake is the survival of a profession of specialist criminal advocates and of the criminal justice system which depends so critically upon their labour’.

A statement continued: ‘Without immediate action to halt the exodus of criminal barristers from our ranks, the record backlog that has crippled our courts will continue to inflict misery upon victims and defendants alike, and the public will be betrayed.’

The strike action is intended to last for four weeks, beginning with walkouts on Monday June 27 and Tuesday June 28, increasing by one day each week until a five-day strike from Monday July 18 to Friday July 22.

Barristers are expected to stage picket lines outside court, including at the Old Bailey in London and at crown courts in Birmingham, Bristol, Cardiff, Leeds and Manchester.

Mark Fenhalls QC, chairman of the Bar Council, said: ‘Each barrister who has voted is understandably angry and upset.

Tourist killed biker while overtaking thinking she was on dual carriageway

‘Members of the criminal Bar have been feeling mistreated, undervalued and overwhelmed for a decade or more.’

The change would allow organisations to draft in agency staff to replace workers on strike, effectively making it easier for bosses to circumvent industrial action.

Angie Evans says the ‘recycle me’ labels on the boxes were ‘ironic to say the least’ (Picture: Kennedy News and Media) A gardener has accused Wilko of ‘absolutely ridiculous waste’ after delivering 10 of the same plant pot each in their own giant box. The packages, ironically marked ‘recycle me’, formed a seven-foot wall in […]

Ronnie O’Sullivan and Zhao Xintong a ‘match made in heaven,’ reckons David Grace

Ronnie O’Sullivan is continuing to work with Zhao Xintong (Pictures: Getty/Zhai Zheng) Ronnie O’Sullivan and Zhao Xintong seem like a match made in heaven, believes David Grace, as the Rocket continues to help the Cyclone develop his game. The world number one was working with the UK champion last season, giving him general advice on […]