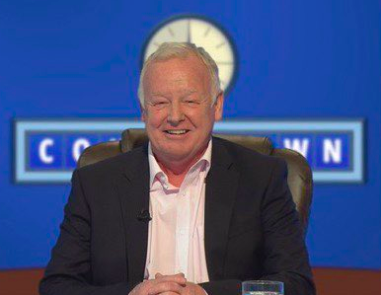 Les Dennis has made his debut hosting Countdown – and it’s safe to say, he’s been a hit.

In May, it was announced that Anne Robinson had quit her role on the Channel 4 game show after just a year.

She was swiftly replaced by radio presenter Colin Murray on a temporary basis, before former Coronation Street star Les was also confirmed as a guest host on the programme before a permanent replacement is found.

This week, Colin, 45, explained to his followers on Twitter that after testing positive for Covid-19, he was forced to stay away from Countdown for a few weeks, resulting in Les, 68, and comedian Jenny Eclair, 62, stepping in instead.

Earlier today, Les, who presented Family Fortunes between 1987 and 2002, marked his first day in the Countdown hot seat by sharing a photo of himself behind the desk, tweeting: ‘So here it is. My first day sitting in for Colin Murray on @C4Countdown. Hope you enjoy.’

Several people who caught the latest episode showered Les with praise for his first show, with some saying that in their opinion, he should become Anne’s full-time successor.

After Anne’s exit, Colin stepped in as a guest host, before catching Covid (Picture: PA/Channel 4)

‘@C4Countdown Les Dennis is a refreshing change of host, although temporary. I wish he could stay for a long time – he’s great!’ someone else said, while another added: ‘Really enjoy watching you host, @LesDennis. Hope to see more of you in the chair in the future.’

One viewer celebrated today’s episode as the ‘best show for ages’, imploring Les to ‘stay as host’.

Another wished Colin better, while adding: ‘@LesDennis what a pro! Thank you for saving @C4Countdown today! You were brill.’

Les Dennis is a natural!
He puts everyone at ease!
I wish they’d given him the job a year ago!
But, he’s an awesome stand in!
A proper trooper!

Les you were just perfect! 100% the man for the job ðð»

Really enjoy watching you host, @LesDennis. Hope to see more of you in the chair in the future.

@C4Countdown Les Dennis is a refreshing change of host, although temporary. I wish he could stay for a long time – heâs great!

When Anne announced she was leaving the programme, she said she had a ‘blast’ during her time on the show.

‘I stayed longer than I signed up for. Now it is time for an older woman to take the reins,’ she said in a statement, having become the first woman to become host of the series.

Though my son knows we’re not his real parents, he’s one of our own

Overall, fostering has been extremely rewarding, and I feel pride in what my family has achieved (Picture: Anthony) I remember laying eyes on my foster son David for the first time. A 13-year-old boy, none of his clothes fitted properly and all of his possessions fit onto the back seat of the car. He must have thought: ‘Here we […]

Who won the last Love Island? Full list of past winners

Love Island has given us a memorable series (Picture: ITV/Rex Shutterstock) The 2022 series of Love Island has been memorable to say the least – but all good things must come to an end. Over the past weeks the show has given us couplings galore, shock dumpings, unexpected arrivals, explosive confrontations and, just occasionally, a […]

Clothes brands like George at Asda are being investigated (Picture: Alamy) Fashion giants Asos, Boohoo and George at Asda are being investigated over whether their eco-friendly and sustainability claims amount to greenwashing. Officials at the Competition and Markets Authority (CMA) said they will look into Asos’s ‘Responsible edit’ range, Boohoo’s ‘Ready for the Future’, and […]