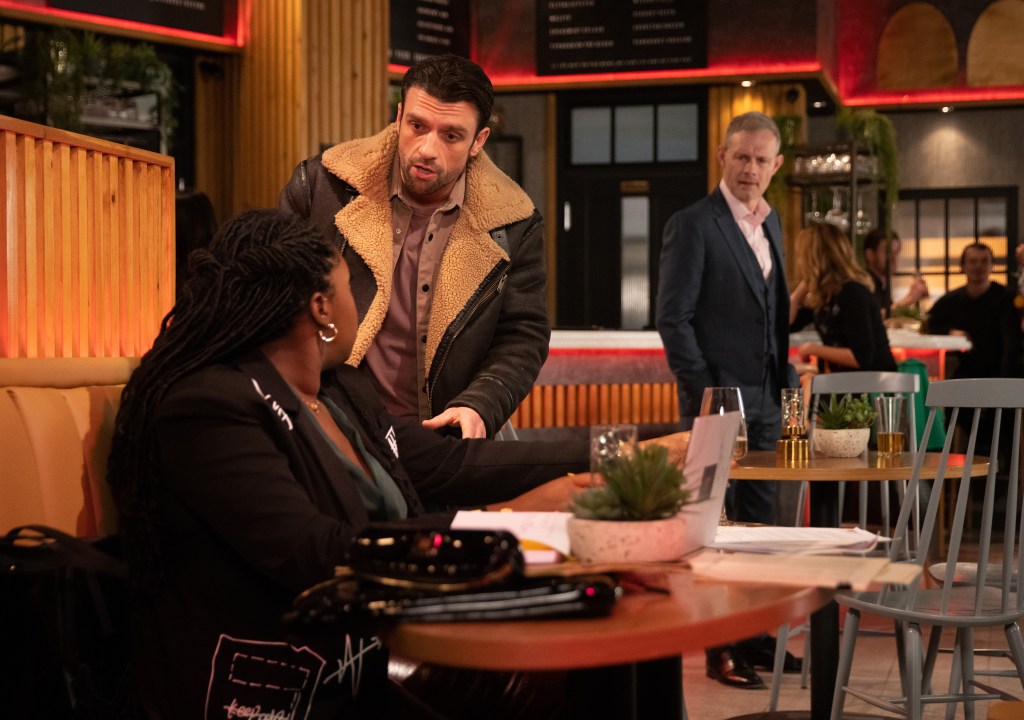 Oh, could Dee-Dee be in danger? (Picture: ITV)

To most of the Coronation Street residents, newcomer Damon Hay (Ciaran Griffiths) is a charming businessman who recently bought shares in the bistro.

However, to Nick (Ben Price) and Jacob (Jack James Ryan) – who recently left Weatherfield – Damon is an evil individual busy smuggling drugs through the deliveries in the restaurant, and he’s willing to do anything he can to ensure his plan continues running smoothly.

Because Leanne (Jane Danson) doesn’t know anything about the money Nick accepted from Harvey (Will Mellor), she believes Damon is just your standard businessman wanting to do improve the bistro.

Unaware of the truth, she happily sits down for an important meeting with him next week, which annoys Nick.

With the restaurant fully booked, Leanne realises they need an extra pair of hands – so Damon arrives.

Working behind the bar, Damon’s shift gets underway and Nick watches him with growing unease, of course fully aware of his real motives after Jacob told him everything.

In the restaurant is Dee-Dee (Channique Sterling-Brown), who has been focused on her family and career since arriving on the cobbles.

However, when Damon approaches, he flirts, and Dee-Dee feels flattered.

But where will this lead?

Dee-Dee is a powerful lawyer, it would be incredibly risky for Damon to start a relationship with her – but maybe this is his plan?

Joey and Vanessa’s chemistry was electrifying as they channelled Danny and Sandy from Grease (Picture: Rex Features) Joey Essex didn’t do much to silence the dating rumours between him and Vanessa Bauer after appearing to confirm they are secretly together.  The Towie star and his professional skating partner hit the ice to skate to The […]

How to get the best kind of ‘rum deal’ in the stunning Philippines (Picture: Rob Buckhaven) Full disclosure, I hadn’t properly connected the Philippines with rum-production before going, and I write about alcohol for a living. That’s either on me, or them. For many, rum is wrapped in the misappropriated tiki myth, a spirit produced […]

Home and Away spoilers: Pregnant Ziggy rushed to hospital after shock fall

Will she be okay? (Picture: Endemol Shine) Dean (Patrick O’Connor) has been trying to look after Ziggy (Sophie Dillman) during her pregnancy, but his girlfriend has been determined to continue with life as normal – even signing up to help Theo (Matt Evans) through an all-nighter when he reveals he’s left a TAFE assignment to […]